UFCLP Statement on approaching elections: no vote for either capitalist gangster! General strike to defend democracy! Forward for workers’ own party!

by United Front Committee for a Labor Party
November 1, 2020 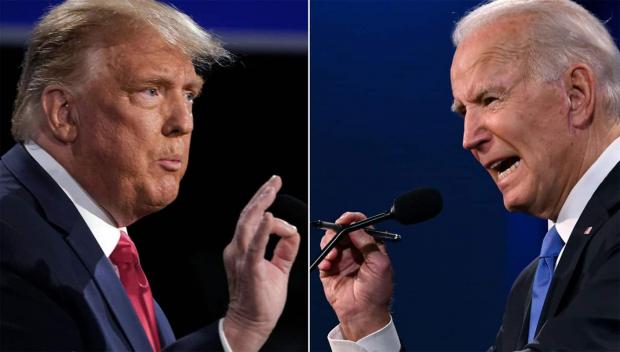 Trump and Biden: two croocks of the bourgeoisie

It is precisely in America that we see the best how there takes this process of the state power making itself independent in relation to society, whose mere instrument it was originally intended to be … [W]e find here two gangs of political speculators, who alternately take possession of the state power and exploit it by the most corrupt means and for the most corrupt ends – and the nation is powerless against these two great cartels of politicians, who are ostensibly their servants, but in reality exploit and plunder it.

The elections are once again at the door. Once again, the politicians of both parties race in proving themselves the rightful servant of the nation and blaming each other for the system’s ill. Once again, their rhetoric of serving the people’s interests thinly camouflages their real mischief – the fight over the spoils of the worldwide plunder. There is nothing new on the electoral front.

However, this time is different. The internal frictions of the bosses as to how to exploit the working class and the oppressed peoples are age-old; but this time, Trump openly threatens with a coup and calls on his fascist thugs to ensure his victory. This threat came amidst the triple crises of Covid-19, economic collapse, and anti-racist revolt. The Democrats have nothing to offer to protect democracy or prevent fascist and racist violence. One side declares that he will breach the people’s decision; the other doesn’t move a muscle. Neither party cares about democracy. Both parties are corrupt and politically bankrupt.

Both parties are in the pockets of the bosses!

In different ways, both parties appeal to the workers, the poor, and the oppressed of the nation for votes; but both keep proving themselves over and over again to be the loyal henchmen of the bosses.

Trump’s appeal to the “American people” and his “anti-establishment” rhetoric carried him to the White House. Yet his actions in the last four years, let alone his past as a real-estate shark, are enough to prove him as an enemy of the working people. His sweet time in power is characterized by massive tax cuts for the billionaires, thinly veiled support for anti-worker and racist gangs, and a huge waste of the nation’s resources in imperialist adventures against Venezuela, Bolivia, and Iran for oil, lithium, and natural gas to flow safely into the corporation’s coffers. The Republican-controlled states are full of open-shop towns, where any union talk whatsoever is mercilessly and immediately crushed. The Trump administration dismissed the threat of Covid-19 as a “mere flu” for months, refused to take any measures, and thereby threw the lives of millions of workers and poor people in jeopardy. Then, when the pandemic evolved into an undeniable threat and claimed lives, the same administration responded with a policy of… bailing out major corporations with tax cuts and federal spending! So much for Trump’s praises of “American workers”! All he and his lackeys in the Republican Party care about is to plunder the workers and the poor of the nation! Trump was able to employ an army of doctors when he caught Covid-19, while his policies deprive millions of workers of healthcare, sick leave, or necessary protection from the virus! This is the ruthless face of the “establishment”, the enemy of the working people!

In the face of this horrendous social landscape, the Democratic nominee Biden is trying to put on the mantle of democracy and civil rights. Nothing can be further from the truth. The Democratic “dream team” consists of the author of the largest crime bill the nation has ever seen (Biden), and a former high-rank dirty cop (Kamala Harris), just when the people in revolt are raising the demands “Defund the police!” and “Abolish the police!”. The Democratic rulers of the cities of Chicago and Minneapolis or the State of Oregon didn’t hesitate to employ the most brutal police repression or to allow fascist thugs to skirmish against the protestors. In the Democrat-run California, tech-titans such as Tesla, Uber, GrubHub, and Lyft can get away with violating all the labor laws and shelter-in-place orders, and force their workers to go to work without PPE, physical distancing, or even proper health inspections. When Trump introduced new tax cuts and bailouts to the billionaires amidst the Covid-19 pandemic, the majority of the Democrats (including Bernie Sanders!) voted in favor. The Democrats are not against the plundering of the working class or the oppression of people of color – they just want the lion’s share for themselves and their donors!

The working class has to take independent action!

Here is the situation, then: There is a president who openly refuses to comply by the people’s will, and declares that he will rely on armed militias to ensure his rule. On the opposing side, there is an equally anti-worker party who does nothing but verbally condemn its opponent’s openly dictatorial moves.

The democratic and civil rights of the working class and people of color are neither adequate nor fully enforced; but even in their current crippled stage, they are much too important to be left to the mercy of these two “gangs of political speculators”. If they are to survive the pandemic, the economic collapse, the racist attacks, and Trump’s coup threat, the workers and the oppressed people of the country must take the matters in their own hands!

The only way to push for even the basic needs for survival is through independent mass action and creating workers’ and oppressed people’s own political organization! The bosses’ parties won’t listen to the words on the pages of the Constitution – they will listen only when the country erupts into a general strike!

Since George Floyd’s death, the people of color have shown their militancy and determination against racism and police terror. The revolts that spread from Minneapolis to the entire country through the summer culminated into the greatest mass movement the country has witnessed in decades. Likewise, since the early days of the Covid-19 pandemic, the workers have been taking action over action to defend themselves against the bosses’ attacks and the virus. From the New Orleans sanitation workers to California nurses, the discrete but determined strikes have demonstrated the latent militancy of the workers. These two movements have sometimes converged, such as in the Juneteenth demonstrations and West Coast port shutdowns spearheaded by the ILWU, or by the nationwide July 20th “Strike for Black Lives” actions, giving nightmares to the bosses and their political henchmen. The bosses, Neo-Nazis, and other powers that be were terrified to see the mass of white young people and workers joining the BLM protests!

This is where the real power lies: in the united action of the workers and people of color, independent of the bosses’ parties! And only such action can save and expand the democratic and civil rights of the nation! Let us organize United Front Committes for General Strike and Public Safety to counter the threat of fascist thuggery!

The union bureaucracy: the obstacle in the path

The working class knows this well. From longshore and warehouse workers to electricians, and from nurses to teachers, many rank-and-file workers have pledged their unions to take action against Trump’s coup threats. Pushed by the rank-and-file militants, the corrupt President of the AFL-CIO Trumka declared that the labor movement will “defend the Constitution” against election frauds. To this end, he called for a convention of union leaders – only to cancel it last minute without any reason!

The union bureaucrats love to act as the transmission belt between the working class and the Democrats. They fear any sign of political independence on the rank-and-file’s part more than the repression by the bosses. They would hate to take any initiative that might get out of their Democrat masters’ hands. Hence their hesitancy to act – even in the face of open threats to democracy! A break from the establishment parties will necessitate a fight with this parasitic, corrupt bureaucracy!

Things get heated up!

At the same time, both Trump’s encirclement of the federal State apparatus and the resistance against it are continuing at the same time, both nationally and internationally. As Trump spat his threats once again on live TV, labor councils in Seattle declared that they would defend democracy through labor’s power. As he appointed the arch-conservative Amy Coney Barrett to the Supreme Court at the very last minute to prepare for post-election showdown, street protests are going on across the nation, defying both parties’ calls for “law and order”.

That is not all. On the international plane, two Latin American countries demonstrated that they will stand firm and tall against the imperialist yoke of the US. Ousted a year ago by a US-backed coup with the international bully Elon Musk’s open support and vampire-like greed, the democratically-elected governmental party of Bolivia made a huge comeback. Within the same week, the year-long popular revolt in Chile culminated into the establishment of a Constituent Assembly and the annulment of the neoliberal constitution imposed upon that country by a US-backed military dictatorship in 1973. Though far from completing the revolutionary process, these developments of the two Latin American nations show that the resistance against the US bosses is a matter of international importance. The US workers and people of color are not alone in their fight!

Forward and onward with the class struggle!

Fellow workers! Comrades! Siblings of color! The political landscape of this country has been dominated, nay, monopolized by “two great cartels” far too long. As one of these cartels is threatening to breach even the meager crumbs of democracy left to the people, breaking through this plutocratic two-party system is necessary – today more than ever!

Only class struggle in unity with the people of color’s struggle for equality can bring about this breakthrough. Only through such unified struggle we can push back against the coup threat, poverty, racism, and Covid-19. Only through a general strike can we defend and expand our rights and people’s will!

However, if we don’t want to just transfer the power from one crook to another, mobilization for a general strike is not enough. We also need to organize for our own political party, independent of both of the corrupt bosses’ parties!

Let them worry about their political machines, votes, Supreme Court decisions, and bureaucratic fights! Let us organize United Front Committees for General Strike and Public Safety in our workplaces, neighborhoods, and communities!

Forward for a workers’ party and workers’ government!