by United Front Committee for a Labor Party
November 7, 2020 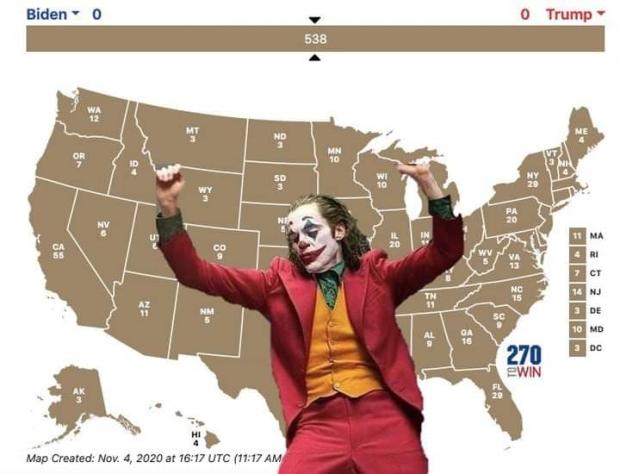 The voting is over, the ballots are closed. Trump has declared his victory, but the Democrats keep challenging him in several important states. However, in the face of Trump’s open moves towards refusing the results, the Democrats’ attempts to “protect democracy” do not go beyond verbal condemnation, pledging people to “count every vote”, and hoping to “get more and more blue as we count. What an effective way to resist a potential dictator!

Declaring an early victory, harassing the entire nation through social media, making contradictory statements back to back, encouraging racist harassments of voters… Trump has deployed all these classic manipulative tactics of a would-be dictator. He is trying to manipulate the results in his favor not only to put an end to the quarrel, but also to win time to consolidate his forces on the ground to smash any resistance he might encounter. What are these forces? Well, proto-fascist, racist gangs of armed thugs, together with an important section of the ruling class!

These should not come as a surprise to the low-income communities, workers, especially workers of color, and organizers. After all, Trump has been saying that he would refuse to step down for months!

Despite Trump’s public threats that he would ignore the results of the election, there have been no national or even regional mobilization and public protest by labor unions to defend our democratic rights.

Nonetheless, he is facing resistance. Everywhere across the nation, rallies and teach-ins are called to defend the results, refuse to give way to dictatorship, and resist Trump’s usurpation of power. Although these semi-spontaneous responses still have a long way to go, both organizationally and programmatically, it is very promising that people everywhere are refusing to give in!

Trump aspires to establish a personal dictatorship to crush the popular anti-racist revolt and workers’ movement and curb the opposition to the ruling class. His manipulations should be opposed unconditionally!

Harbor no illusions that the Democrats’ care for democracy!

The Democratic party’s presidential nominee’s main quality was that he was Not Trump. The Democrats did not offer anything to improve the living conditions of the people throughout their campaign. Biden actually promised that “nothing would fundamentally change”.  All they preached was the same neoliberal, anti-worker, pro-police agenda with a more civil face. California liberals had no problem in spending millions of dollars on the anti-worker, racist Prop 22 campaign, for instance.

If this was true on a state-wide level, it was even truer on a national level. Biden’s campaign started with a visit to a car plant in Wisconsin, where he called a worker “full of sh*t”. When Trump’s militia attacked on anti-racist protesters, all Biden could do was to call for peace and order while continuing to support more funding to the police. When people rose up against the racist police, Biden nominated a former dirty corrupt cop Kamala Harris as his vice-presidential candidate. When Trump declared he would channel more money to police departments to suppress the “disorder”, Biden declared he would do the same to… put killer cops through therapy! All Democrats offer is a joke, and it’s not even funny!

Fellow workers! We must take action!

Yet, the threat to democracy is very real. Many conscientious workers and people of color have voted Blue in hopes of defending themselves and their fellow siblings against this threat. Though we disagree with their method, their reasons for doing so are entirely valid. However, if we are to fulfill our hopes of defending and expanding our rights and protecting ourselves from racist attacks, we must take the matters into our own hands! We must organize for a general strike to oppose a Trump dictatorship!

Now is the time to act! These elections have politicized a previously immobile section of the society. For the last few decades, the voting rate of this country had been floating around 50%. In this year’s elections, it jumped to 66%! People everywhere want change!

Of course, this increase in the voting turnout is by itself not enough. There is still no national political platform for working people through which they can put their desire for change into political practice. However, the frustration is there!

In a time like this, the best thing we can do is to start organizing – for ourselves, for our fellow workers, and for our siblings of color. Only through withholding our labor can we remind the bosses’ parties that it is us who run the country. We face mass hunger, mass evictions and a massive depression because of this rotten system.

Some Labor Councils and unions have supported a general strike, but talk is not enough. We have to organize in our unions and work locations to prepare to shutdown this country, including all transportation, auto plants, tech companies and banks. Workers with or without union membership need to unite to defend our democratic rights, organize the millions of unorganized workers at Amazon and other companies, and stop the massive budget cuts of public services and education! The billionaires are getting massive additional wealth in the midst of the pandemic! These troubles will continue under either administration!

We need  a united front for a general strike, and a democratically run mass labor party with a program to defend working people and the oppressed. The capitalists and their parties cannot solve our problems!

Only through a general strike can we defend and expand our rights!

Build the United Front For A General Strike and A Labor Party NOW!