UFCLP July 5th Statement: All US is San Francisco Waterfront, every day is July 5th! Forward and onward with class struggle and against police terror!

by United Front Committee for a Labor Party
July 5, 2020 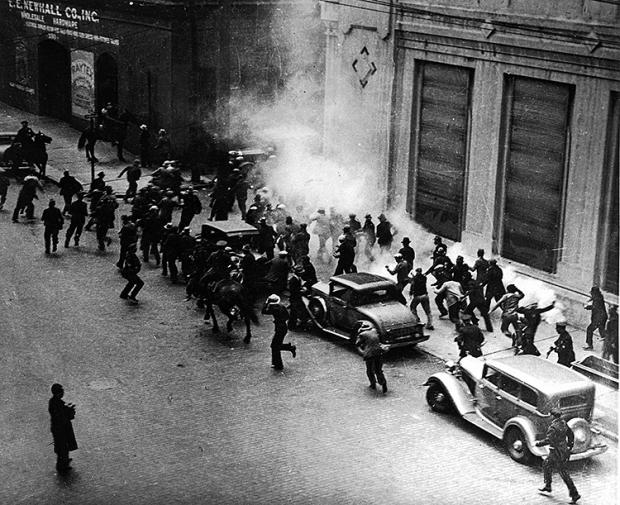 July 5th has arrived! Today is the day when the water of San Francisco Waterfront turned red with workers’ blood. On 1934 this day, the police murdered two of our fellow workers who were defending their right to organize. This criminal act triggered a massive response from all the workers of the city, culminating into the San Francisco General Strike!

The Waterfront Strike was not only about better wages and working conditions, but also about the right of workers to organize independently. The bosses, together with their lackeys in the union bureaucracy, wanted to impose business unions with strings in the hands of the company, separate contracts to divide the workers, and union-busting regulations. The longshore workers and sailors insisted on autonomous unions, full unionization in the workplace, and coast-wide collective contract. What was at stake was nothing less than the autonomy of the working class!

And how did the government react? By sending in the police who slayed two workers dead! Remember that this was the time of the New Deal – still an imaginary “Golden Age” of some among the Left! Brute repression has always been the response of the capitalists and their politicians to the workers raising their voices. The union bureaucrats, the bosses, and the Government were, are, and will be terrified from the autonomy of the working class! July 5th, 1934, or the “Bloody Thursday”, witnessed the martyrdom of two workers heroically fighting for their class’s rights and interests. Our task today is to continue their fight with the same spirit!

The agents of repression of those days are still very much with us today. Business unions, bureaucrats who capitulate to the whims of the bosses at every turn, divisive contracts, and union-busting are still oppressing workers everywhere. Killer cops are still roaming on the streets, claiming the lives of our siblings of color. The bosses’ laws, their Taft-Hartley Acts, their budgets with handsome shares to the police and the military, their business unions that keep the cops in the labor movement, are still trying to prevent us from uniting in our fight against them! Today, the Alameda Labor Council and the Democratic Oakland City Council are supporting the privatization of Port of Oakland – an explicit attack on maritime unions and racist gentrification!

However, all this is not a reason to despair. The heirs of the 1934 Strike, the carriers of the same militant spirit, are also among us! The bosses and their henchmen killed our fellow workers and eventually repressed the strike, but they couldn’t prevent the workers from taking the matters into their own hands! The International Longshore and Warehouse Union (ILWU), the heir of the fighters of 1934, has been the most militant union of the West Coast since its inception. They fought against the bosses, racism, imperialism, privatization, and many other threats to workers’ autonomy and solidarity. Every July 5th, they organized memorial events, lest the sacrifices of their forbearers be forgotten.This year, amidst the pandemic, economic collapse, and anti-racist popular revolt, they are standing against the threat of racism in their workplace!

If we are to survive the pandemic and the economic depression, and if we are to beat off racism, we should follow the example of the longshore workers of 1934 and the ILWU. We should unite around our class’s most burning issues, and never capitulate to the bosses’ and their politicians’ whims!

We should form our own, democratically controlled unions and organizations! Forward for a Workers’ United Front, independent of both of the bosses’ parties!

On this July 5th, we demand: