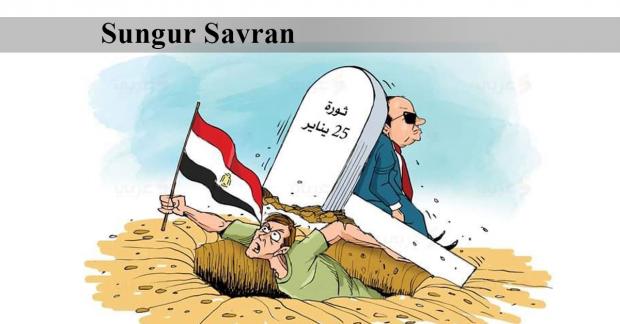 The great poet of the dawn of the bourgeois age, William Shakepeare, in what is probably his most renowned play, Hamlet, has one of his charaters say, “Something is rotten in the state of Denmark”, words that have become engraved, like many a Shakespearean line, in the common memory of humanity. Had Mahmoud Darwish, the great poet of the Palestinian revolt, not passed away in 2008, he would possibly have written a verse today, in allusion to that of Shakespeare, depicting out times: “Something is bleeding and seething in the Arab world”.

Here is a people that has been divided into dozens of countries whose frontiers were drawn in the sand by the very hands of colonialism over a geography that extends from Mesopotamia to the heart of black Africa and from the Indian Ocean to the Atlantic and yet shares the same language, the same culture and the same accursed history. It is this people that has risen in popular rebellions and revolutions throughout a whole decade in order to change its ill-fated destiny. Revolutions in five countries within the space of two years between 2011-2013, new revolutions so far in two different countries in 2019, and many more popular revolts in which the people do not, or rather are not yet strong enough to, reach out for power and yet vent their anger and frustration and express their hopes and aspirations. This is the Arab world at this beginning of the 21st century. Through all the dust and smoke, it is declaring loud and clear that it will no longer tolerate either the “rotten” medieval states of the kings and the sheikhs and the emirs, nor the dictators who act as self-appointed monarchs that rule their countries for two, three, four decades.

The revolution has nowhere been triumphant yet. Parliamentary democracy was won in Tunisia in place of the 23-year rule of a dictator, Zine al Abidine ben Ali, who has recently died in exile, a shameful death in Wahhabi Saudi Arabia for a supposedly secular despot. Only parliamentary democracy although that is of course much better than the despotism of an autocrat. But this cannot and must not be the sole fruit of the sweeping revolutionary gale of an entire people, no! The Arab peoples have not yet been able to win because those who gobble up the vast oil wealth of the Arab people, the rulers of Saudi Arabia, the United Arab Emirates, Qatar, Kuwait and their ilk either crush or absorb the revolution in each country. They have hired a dictator in Egypt. The Sisi Bonapartist coup of 2013 marked the end of the first generation of Arab revolutions in the 21st century. They have bombed weddings and school shuttle buses in Yemen. They have unashamedly occupied Bahrain militarily. They have provoked the takfiri sectarian bands into creating a civil war in Syria. And they have received the support of imperialism everywhere. They have had imperialists pour death on the peoples of Libya, Iraq, and Yemen or anaesthetize the revolution in the swamp of “civil society” as they are now doing in Sudan and Algeria.

And yet they have not succeded in abating the fearsome rage and fury of the people. They imagined they had extinguished the revolutionary wave of 2011-2013, but the revolution arose from its ashes in Sudan and Algeria in 2019! In an article published on RedMed in February this year when the people’s insurgency that had started in Sudan in December 2019 turned into a full-scale revolution, we ended the section on the possible internatonal consequences of this revolution with the following passage: “A victory, even if partial, of the masses in Sudan will, in all probability, provoke similar urges in other Arab countries. It would first have an impact on those countries already in ebullition, the ones we have already mentioned. But the ultimate moment of truth will come when the northern neighbour of Sudan, the giant of the Arab world, Egypt undergoes the same kind of effect. So the Arab revolution is far from dead, if such is the case” (Emphasis added).

Now, six months later, the revolution has knocked on Egypt’s door once again. Against the Sisi dictatorship that imprisons any dissident voice and throws the mutilated bodies of opponents considered dangeorus into the dark recesses of the outskirts of Cairo, the Egyptian people came out in their thousands on two consecutive nights on 21 and 22 September in Cairo, Alexandria, Suez, Port Said, the working class city of Mahalla al Kubra, and elsewhere. Close to a thousand people were taken under custody. This wave may dwindle, in fact will, in all probability, dwindle. But considering that the ratio of the Egyptian population living under the poverty line has risen from the 20 per cent it was during the first wave of the revolution in 2011 to 35 per cent now and will almost inescapably rise towards 50 per cent under the whip of the vicious policies of the IMF and the blows of the Third Great Depression, Egyptians will no doubt lend an ear to the grievances expressed by their Arab sisters and brothers in other countries. The Egyptian people and youth have already made the first step towards overcoming fear. The lid has been raised. Even if it is shut today, it will perforce be reopened tomorrow.

The geography of the Middle East and North Africa is accumulating a great wave of revolutionary vigor. When that revolution will have triumphed on the dried and parched soil of the Arab world thristing for rain, Sunni and Shia will no longer grab each other by the throat and mutually set each other’s mosques on fire, the takfiri will no longer find the dull knife to decapitate the imagined infidel, the sheikh and the emir will not fatten on the rent of oil and gas while the fellah[*] starves, and the Arab woman will not be imprisoned behind a black curtain that cuts her from the rest of humanity.

We in Turkey co-existed with the Arabs as citizens of the same country for centuries, sharing the same exploitation and persecution of sultan and pasha, of timar owner and tax-farmer. The Arabs still name the hated high-brow elites of their countries “effendi” and the murderers that act in the name of state repression “baltadjis”[†]. Let us make preparations to cleanse our geography of all the “effendis” and the “baltadjis”. Let us establish revolutionary parties of the proletariat in each and every country in our region. Let us make this geography once again one of the pioneering societies of humankind, just as it was many centuries ago, on the basis of a worker-fellah alliance. Without excluding the Persian, the Kurd, the Christian, and the Jew, let us dream of the Socialist Federation of the Middle East and North Africa, to proceed to establish it as soon as the conditions are favourable.

For as Mahmoud Darwish wrote: “How vast the revolution, / How narrow the journey, / How grand the conception, / How small the state!”

[*] “Fellah” is the generic name for the Arab peasant.