Towards US military intervention in Venezuela 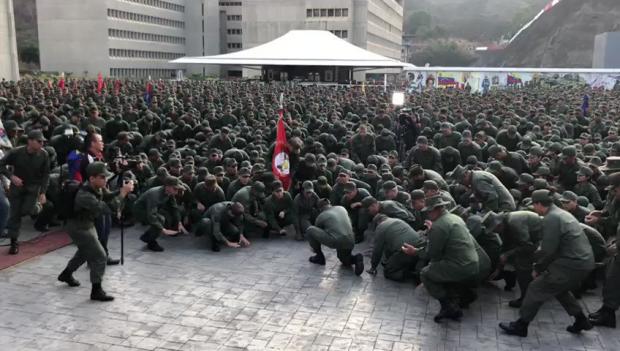 Maduro and 4,500 soldiers at the Tiuna barracks

In the small hours of 30th April, the US puppet named Juan Guaidó, the self-appointed “president” of Venezuela, broadcast a video from a military base that showed him surrounded by some elements of the military and declared that his bid for Miraflores was entering its final stage. Guaidó has thus taken a step to consummate the civilian coup he has attempted with a military coup. While pretending that the army, or at least a sizeable section of it, has now gone to his side, the pseudo-president also called the people out on the streets. On May Day, both sides, the partisans of Guaidó as well as the workers and labourers who support Nicolás Maduro, the rightful president of the country, thronged the streets of Caracas in a show of force in two different demonstrations.

But in the meanwhile it had become clear that Guaidó was not able to support militarily the people that he had called out on the streets and that the great bulk of the army was still on the side of Maduro. In other words, having won to his side an unspecified number of troops, Guaidó had chosen to pause as if he were carrying out a real coup d’Etat. Despite the manifest failure of his tactics, he called the people out again on the evening of May Day for the next day. But Thursday and Friday the streets were all empty! The same seems to have happened after Guaidó appealed to the people to demonstrate in front of military units on Saturday the 4th. Maduro, on the other hand, organised an impressive show in the largest barracks of the military, La Tiuna, with 4,500 officers and soldiers, where he chanted together with them: “Loyalty forever, treason never!”

Guaidó’s military is the US army!

Why, then, did Guaidó engage in such a bluff, obviously condemned to failure? Why did he set out on this path, knowing full well that the army was still on the side of Maduro? The answer is evident: because his army is not the Venezuelan army but that of the US! He can act so recklessly because he counts on his protector, the Yanqui! Mike Pompeo, the US Secretary of State, and John Bolton, National Security Advisor to Trump, immediately came forth supporting Guaidó’s “Operation Liberty” (how fittingly does this name rhyme with other CIA operations!) More alarmingly, on 2nd May Pompeo stated that the US would intervene militarily if the need arose.

This is the strategic plan of the US. The US government knows full well that the Venezuelan army will not abandon Maduro easily. It will not because the regime established by the late Hugo Chávez and defended by Maduro is not a personal regime, if such a regime ever existed. It is the instrument of power for a bloc of social forces that includes the officer caste. In other words, the majority of the officer cadres are owners of this regime alongside Maduro himself. This does not mean, of course, that a part of this officer cadre will not, under any conditions, go over to the side of the US. That depends on the size of the carrot and the stick that the US is holding out to them. However, different from many regular armies, the Venezuelan armed forces have very powerful economic ties to the regime. Hence the carrot has to be very sizeable and the price of persisting to stay on Maduro’s side has to be very high for a considerable exodus to the side of Guaidó.

That is why Trump asked his allies in the Organisation of American States (a reactionary diplomatic pan-American umbrella organisation), as soon as he took office back in 2017, the following question: “Why shouldn’t the U.S. just invade?” The intention was clear. The problem was that his Latin allies did not approve of the idea for they knew that this might set the whole southern part of the continent ablaze.

However, when the fascist Bolsonaro was elected president of Brazil, the most powerful of the Latin countries economically and politically, the balance of forces changed drastically. This raised the prospect of a military intervention of the US in Venezuela. And, lo and behold, in the month of January, immediately after Bolsonaro took office, Guaidó declared his self-appointed presidency, after duly conducting consultations with the US, Brazil, and neighbouring Colombia (where a very right-wing president is at the helm as well).

The Latin American leaderships are still aware that an American invasion of Venezuela is an extremely risky venture and have shied from supporting the idea when it came up earlier this year. Despite this, the Trump administration is probably hoping that bloody episodes as a result of provocations such as that undertaken this past week, as well as the daily deterioration of the economic situation, will create the appropriate conditions for intervention at a certain moment in the future. And we have been reminded by a dispatch of Reuters that mercenaries (or “contractors” in US military jargon) employed by companies such as the ill-famed Blackwater, whose services were amply used in the occupation of Iraq, are a possible source of a “private” war on Venezuela.

Guaidó engaged in this provocation because his movement is stagnating. He declared his presidency in late January. Then in late February, he appealed to his partisans to descend massively to a border region between Venezuela and Columbia, supposedly to transport humanitarian aid to the people of the country. His well-fed supporters did not bother to cross the country from one end to the other and the whole operation amounted to a pop concert, attended dutifully by the locals. March saw a weeks-long blackout in the country, who knows as a result of what kind of machination. But neither the working masses and the poor, nor the army are moving over to the side of Guaidó. He may very well have received the shameless recognition of 54 countries as president of Venezuela, but his prospects of winning over his own people are dwindling by the day.

Jeffrey Sachs: “US sanctions have killed over 40 thousand people”!

Right at the moment when Guaidó was making his move for the final phase of his bid for power, an accomplished executor of the neoliberal world order, an economist notorious for the shock programmes he imposed in the past on many countries of Eastern Europe (the so-called “transitional” countries) and of Latin America, a man above all suspicion for the capitalist class, Jeffrey Sachs, came out with the hard truth about US sanctions implemented since 2017. According to his expert opinion, it is these sanctions that are responsible for, first, the hyperinflation, estimated at one million per cent per annum and going, and the scarcity of goods that the Venezuelans are suffering from and, secondly, the excess number of deaths, estimated somewhat loosely at 40 thousand, since those sanctions were started. Sachs also underlines the fact that the sanctions have no other purpose than regime change (https://www.democracynow.org/2019/5/1/economist_jeffrey_sachs_us_sanctions_have?fbclid=IwAR0OGTYlw8xwHonLSds5NJu3N5rCqbL_wTKuIRN0x6Gdv2xy7h6SdQMFJlg).

In other words, the aim of the US is not to solve the humanitarian crisis that Venezuelans have been suffering from, far from it. US imperialism is one of the root causes of that humanitarian crisis! The US is after regime change in Venezuela through those sanctions, precisely in the same manner as it is now targeting Iran.

Should the US attain its goal in Venezuela, it will have accomplished quite an unprecedented feat in modern history. It will not only have brought down the rightful government of another country, this being quite a common occurrence in the past, nor will it have carried out regime change alone. No, it will have appointed in person the ruler of a sovereign country without any cosmetic measures to hide the fact. In these times of grave economic crisis, what we call the Third Great Depression, and the concomitant instability and disruption in political life all around the world, this is an immense menace for all countries, not only Venezuela or the countries of Latin America. Should it achieve success there, doors will be opened for it elsewhere in the future.

Let us all, then, adopt an unwavering attitude against the effort to bring down the legitimate government of Venezuela by a puppet of the US, whatever our criticism of chavismo or Maduro himself. For revolutionary parties of the proletariat, this implies not only political publicity and warning, but support to the Venezuelan working classes by any means necessary. As for governments in place, the government of Erdoğan in Turkey, as well as other countries, pretends to follow a policy of support for the Venezuelan government. But Turkey is a member of NATO and hosts US bases, which imperialist forces use to repress all types of challenges to their power all over the Middle East. The support can only be made real by exiting NATO and closing down the US and NATO bases, starting with Incirlik. The rest is empty chatter.