Towards unity of communists of Russia and of former Soviet Union 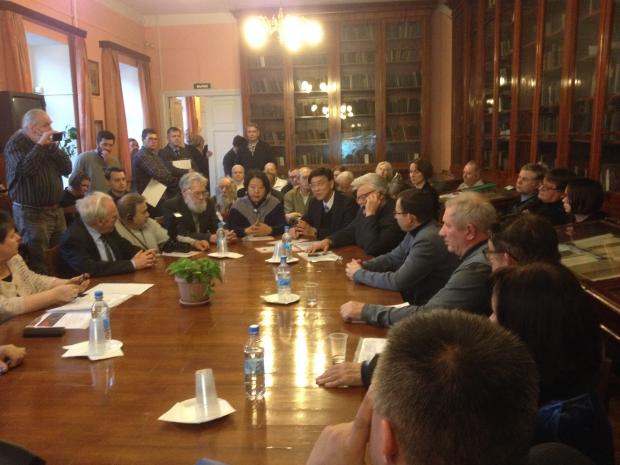 On the exact centenary of the victory of the October revolution, in the city that was the very centre of that revolution, Petrograd, later Leningrad, and now St. Petersburg, gathered a conference commemorating this most important social revolution of the modern age. The conference had two different tracks, one international, in which, in addition to Russian communist and Marxist organizations, several foreign parties participated, including the EEK of Greece and the DIP of Turkey, along with Marxist intellectuals such as Samir Amin, and a more Russia and former Soviet Union oriented one, with communist and left-wing parties from Russia and some countries of the former Soviet Union, such as Donetsk, Belarus, Moldova, Lithuania, Latvia etc. We are publishing below a statement coming out of this second track of the conference. We are also making available the Russian original of this statement.

Statement of participants of the round table

“Is a Left-wing Union of the Left-wing Political Parties and Social Movements of the former USSR Republics Possible?”

"The Great October Revolution of 1917

Urgent Problems of Historical Development of the Mankind"

On the round table practically all speakers spoke about the need of creation and have supported the creation of:

1. Association (Union) of the left-wing parties and movements of the Russian Federation.

2. Association (Union) of the left-wing parties and movements of all former republics of the USSR.

3. Association (Union) of the left-wing parties and movements of the whole world (new International).

Participants of the round table have created a working group, the task of which is carrying out consultations and negotiations on the formation until the end of 2017 of three relevant organizing committees. At the same time participants of the round table individually, or creating similar working groups, will take necessary steps for the formation of these organizing committees.

Besides, the Russian participants of the round table take necessary steps for the formation of a pre-election association (Union) of the left-wing parties and social movements of the Russian Federation for the purpose of elaboration of a unitary uniform strategy and tactics in the run-up to the presidential elections in March, 2018 and the promotion of a single candidate by this association for the Russian President's post with the program of alternative (socialist) development of the country. In particular, in St.-Petersburg (Leningrad) until the end of November the working meeting of the left-wing parties and the movements on preparation for elections will be held in which also representatives of other regions, including on Skype, will also be able to participate. The Russian participants of the round table urge the holding of the same working meetings in Moscow and other cities of the country. New, 1918 has to become the beginning of reconstruction of society of justice, equality and brotherhood – new Soviet socialism. It is not revolution that faces limitations; it is the anti-national, barbaric and brutal capitalist development that has reached its limits.