by The Organizing Committee of the 3rd Euro-Mediterranean Conf
August 9, 2015 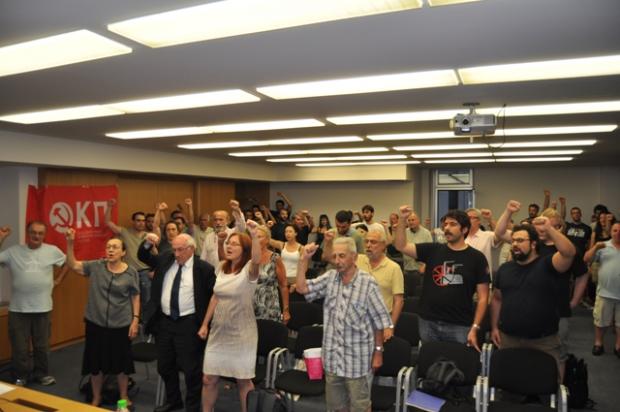 The following communiqué was released immediately after the Third Euro-Mediterranean Conference held in Athens in July was held, but has not been posted on the RedMed web site as a result of a technical problem. We are now belatedly publishing it.

The 3rd Euro-Mediterranean Conference concluded successfully in Athens, Greece, on July 18-20 2015, under extraordinary conditions of the on-going political crisis in this country and in Europe.

It was organized by the Balkan Socialist Center “Christian Rakovsky” and the RedMed network, and it was hosted by the EEK.

The interest expressed and the attraction manifested towards the Conference certainly reflects the enormous interest produced by the Greek/Eurozone crisis. At the same time, it reflects the political authority of the main organizer and host of the Conference, the EEK, which is in ascendancy at home and abroad, both previously and after the on-going crisis.

Participating in the work of the Conference, were Parties, organizations, and activists from Greece, Turkey, Italy, Finland, Denmark, UK, Portugal, Austria, Poland, Macedonia, Bulgaria, Cyprus, Kurdistan, Ukraine, Russia, United States, South Africa, India, and Brazil - a total of 19 countries. In this list should be added comrades from three other countries, Iran, Tunisia, and Bosnia who could not participate for reasons independent of their will ( including problems posed on visas). Nevertheless, the comrades of Iran and Bosnia have sent written contributions to the Conference.

From Greece, apart from the EEK, the Conference was addressed by NAR and OKDE-Spartakos, both members of the coalition of left organizations Antarsya, as well as by the workers Caravan of Struggle and Solidarity formed by the workers of the occupied factory of VIOME and the occupied National Radio-Television ERT 3 both under workers control and workers management.

From Turkey, the DIP ( Revolutionary Workers Party) participated actively as co-organizer. The Conference was also addressed by the SDP (Socialist Democracy Party affiliated to the HDP, the Kurdish led Coalition, who recently had an important electoral victory and became the main target of the terrorist attacks by the ISIL and the Erdogan regime).The Committee for Solidarity to the Political prisoners in Turkey and Kurdistan was also present bringing greetings as well as other activists from all parts of Kurdistan.

From Italy, there was a delegation by the Partito Comunista dei Lavoratori (PCL)

From the Balkan region, apart from the Greek and Turkish comrades, reports were presented by comrades of the Autonomous Workers Union , from Bulgaria, the Movement “Lenka” fromMacedonia, and a document was sent by the workers of the DITA factory in Tuzla, Bosnia. An activist from Cyprus also participated in the works.

From the Russian Federation, delegates participated from the RPK ( Russian Party of Communists), the RKP-KPSS ( Russian Communist Party-CPSU) , the OKP ( Unified Communist Party), and the social movement Alternativi.

From Ukraine, the Conference was addressed by the organizations “ Against the Current”, Borotba, the Communist Party of the People's Republic of Donetsk, the Union for the Political Prisoners, and the Union of the Political Refugees, from Donbass via a Skype connection.

From Poland, an activist of the anti-capitalist Left.

From Finland, a delegation of the MTL (Marxist Workers' League)

From Denmark, an independent Trotskyist and activist.

From the United Kingdom, Hillel Ticktin, editor of the Marxist Journal Critique.

From Portugal, Raquel Varela in a personal capacity from Rumbra.

From Austria, a representative of the international organization RCIT (Revolutionary Communist International Tendency).

From the United States, Alex Steiner, editor of the web site http://permanent-revolution.org

From South Africa, Latief Parker, member of the Editorial Board of Critique.

There were also observers in a personal capacity from India and Brazil ( most of them from the PSTU).

A message of greetings was sent and read to the Conference from the Partido de los Trabajadores (PT) de Uruguay.

The last day of the Conference, Monday, July 20, special Commissions prepared and presented to the Conference a Final Resolution and special statements on the Suruç massacre by the Isil , onthe Middle East, on the Balkans, on Ukraine.

The Final Resolution was voted unanimously by those present.

Unanimously also were voted the statements on the Middle East, the Suruç massacre, and the Balkans.

The resolution on Ukraine provoked, as in the 2nd Euro-Mediterranean Conference, an intense debate and finally, after amending it, was supported by a large majority with two abstentions (PCL, H. Ticktin), and no one against.

All materials will be published in all the respective languages of the participants and widely distributed.