They are all in agreement about capitalists’ interests and US partisanship! We are not! We will struggle until they are all gone! 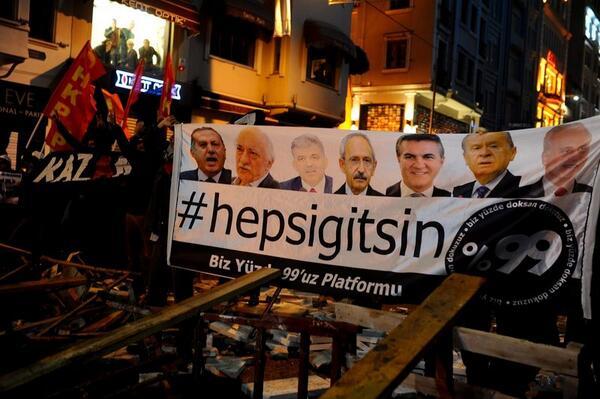 This is the Editorial of the monthly central organ of DIP (Revolutionary Workers’ Party) for August, translated into English from its original Turkish.

When the December 2013 corruption cases exploded, the people took to the streets to ask account for the corruption. Barricades were set up near Taksim and there was a banner above one barricade. “We are the 99%” and “Let them all go!” said the banner. But who are the “them”? Let us name “them” from left to right: Tayyip Erdoğan, Fethullah Gülen, Abdullah Gül, Kemal Kılıçdaroğlu, Mustafa Sarıgül, Devlet Bahçeli… There is one more on the extreme right. Apparently, people who see the banner usually don’t recognise this man. Most  ask “Who is this?”.

The colored-eyed, gray-haired man, who doesn’t seem to belong to this geography, is Francis J. Ricciardone, then ambassador of the United States to Turkey. The man who had a confidential meeting with Kılıçdaroğlu, resulting in Mustafa Sarıgül’s return to the CHP and his candidacy for mayor of the İstanbul metropolitan municipality. Ricciardone is the architect of what we have since called the “American opposition”, which brought together Gül, Gülen, Sarıgül and Kılıçdaroğlu. This American opposition was prepared against Tayyip Erdoğan’s power shaken by the people’s revolt, in order to  contain the people’s struggle within the borders of the system.

Nowadays we look back and say “you were all involved in this mess!”,  but the important thing was saying “Let them all go!” back then. It was possible to get rid of all of “them” by the strength of the people resisting and striking, people of different tongues and from different cities, adding the proletariat to the revolt. It was possible to establish an equal and free future. It was possible to repel American imperialism, the usual suspect of every scourge that befalls this country. It was possible to do this with the struggle of the people, seeing the US as an enemy rather than taking it as a referee. None of “them” have gone and all together they caused the country’s present situation.

The coup d'état which was attempted on July 15th occurred on the basis of the American opposition’s political axis established earlier under the leadership of the imperialist ambassador. The hitmen were Gülen’s followers and their pro-NATO allies and its base was İncirlik. Nowadays, the Gülen community is supposedly being liquidated, but nobody is raising a question about Turkey’s NATO membership or the status of the İncirlik base. There are barricades in front of all of the barracks but Incirlik, the coup base, is untouched. The power cut on the  night of the coup has been ended. Nothing is in order in the country, but in İncirlik everything returned to normal in a few days.

Although these simple facts are clear, “they” are all coalesced around a “national consensus” fiction, lulling the people. They are holding common public demonstrations, throwing flowers and smiles at each other. They are in agreement about the stock market’s and forex’s stabilisation, foreign capital inflows and protection of Turkey’s NATO membership and Incirlik base in any case. As the Revolutionary Workers' Party (DIP), our call is clear: “Turkey, out of NATO! Shut down the Incirlik base!”

The political direction we suggest is crystal clear. Today, we are not giving support to Erdoğan and AKP’s front while protesting the coup d’état and American imperialism as we were against supporting the American opposition against Erdoğan while we were asking for accounts for corruptions yesterday. We are warning the working class about the “national consensus” fiction. We call on the working class to establish its own independent front against the capitalists’ pro-NATOand pro-American stock market and forex agreement.