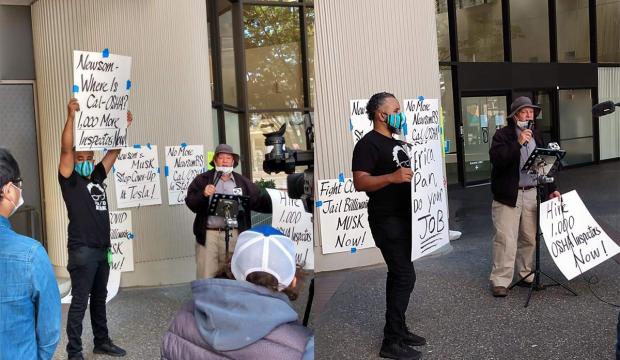 Elon Musk, the CEO of high-tech giants SpaceX and Tesla, has acclaimed a celebrity status around the world over the last few years with his company’s supposedly green-friendly products, eccentric behavior, media personality, and his supposed “innovativeness”. He himself has done everything in his power to enhance this boastful public persona, from launching space shuttles “for fun” to naming his new-born child after a computer code. As a result, this sassy poster-boy of the Silicon Valley bourgeoisie is revered as an innovative miracle-man in a number of business and high-tech R&D circles. His South African origin and occasional appeals for green energy or universal basic income lure some of the leftist intellectuals around the world to sympathize with him.

However, workers employed in Musk’s Tesla plant in Fremont, California, exposed through their action what he really is: a boastful bully and a crony union-buster. On July 2nd, Wednesday, Tesla workers gathered in front of Department of Public Health office in Oakland, California, for a rally and press conference.

Despite his reputation as a “relatable” and humanitarian billionaire (itself a contradiction in terms), Musk has never hesitated to employ the most brute tricks in a capitalist’s arsenal to suppress his workers. He has covered up workers’ injuries, worked employees overtime and in excessive hours, bullied workers personally, and fired any worker who tried to organize their co-workers to defend their interests. There are also numerous reports about Musk emailing his engineers derogatory emails just for fun, and the management harassing the workers who demand rights.

Let us remind our readers that even in the US, the heart of imperialism, some gains of the working class have endured the four-decade long neoliberal onslaught. Even in California, the “golden state” of American capitalism, the bourgeois law recognizes Musk’s actions to be strictly illegal. Thus, the State of California is turning a blind eye on the implications of its own laws and regulations.

Lately, Musk added most self-consciously and explicitly new disgraces to his criminal record. He declared and carried out his decision to open the Tesla plant despite the shelter-in-place orders of California, and called the government of California to jail him if he is not allowed to do so. Moreover, despite the rising number of cases of Covid-19 in Tesla, he still refuses to allow proper health inspection in the plant or to provide PPE to the workers.

And how did the Democratic government of California respond to the threats of this sassy bully? By bending its own laws according to his wishes! In a reply to Musk’s tweet declaring that he would open up his plant no matter what, the State of California said that they would “make adjustments”! Moreover, the State of California not only allowed Musk to open his plant, they also refused to send OSHA inspectors into Tesla! Instead, none other than the Fremont Police is entrusted with inspecting the hygiene of the plant! The health and safety of the Tesla workers are left to the hands of their most immediate oppressors!

Unfortunately, what is true for Tesla is true for a lot of other West Coast giants. Union busting, loose or no health and safety measures, and bed-fellowship with the Democrats are commonplace, from Amazon to the UC system. Many companies are allowed to conduct their own health inspections – a most vital public work is abandoned to the hands of capitalist vultures!

The bourgeois-reformist response, or the bankruptcy of “Keynesianism”

With privatization, commodification, capitalist exploitation and oppression reaching most grotesque levels in the last few years, some members of the Left intelligentsia have begun to criticize “neoliberalism” or “neoliberal capitalism”, implying that a less exploitative, more human capitalism is possible and desirable. Much of this criticism amounts to a call for returning to the pre-neoliberal era, with more public works and state expenditure, welfare distribution, some minimal rights and benefits to the workers, and so forth. Most of the concrete policies advocated by these intellectuals are very loosely – and inadequately – termed as “Keynesian”.

One of the superstars of this approach is a UC Berkeley Economics professor, Robert Reich. Already a celebrity thanks to his best-selling book Saving Capitalism for the Many, not for the Few, his advocacy for unions and universal basic income, and his service as Secretary of Labor under the Clinton administration, he replenished his fame with a recent tweet war with Musk.

Under ordinary circumstances, we wouldn’t spare any space in these pages devoted to class struggle for a phony tweet exchange between celebrities. However, the individuals involved in this particular skirmish are so representative of their respective social sections – a crony, brutal bourgeois and a “Keynesian” intellectual – that the event reflects a certain social fact.

As Musk pompously declared that he would open his plant no matter what, Reich reminded him that he has “responsibilities”, and that he has to pay his employees full wages during the pandemic. Musk’s reply reflects the bourgeoisie’s attitude towards such moralizing sermons. After calling Reich “a boring idiot”, Musk then blocked him on his account. Reich’s rejoinder, on the other hand, shows how hopeless, clueless and helpless he and his like are. In a video he has taken of himself, he whines and begs Musk for mercy. “You are a true visionary”, he says, “and I admire most of your work. But,” he goes on, “you have to understand that you have some basic responsibilities”. Basic responsibilities! A professor of economics trying to butter up and appeal to the conscience of a sassy billionaire who had just scoffed at him! To believe that his moralizing sermon would have the slightest impact on Musk, Reich must be the exactly what Musk calls him:  a boring idiot!

However, this reflects the social position the bourgeois reformists find themselves in the current crisis-ridden moment: begging for crumbles, and moralizing in the face of the capitalists’ scoffs. As the delicate middle ground that separates the workers from the capitalists crumbles under their feet, they have nothing left to appeal but some abstract morality. And as Marx quotes from Fourier, “morality is impotence in action!”

The proper response to Musk’s obnoxious greed will come, and has come, not from some “liberal” intellectual, but the workers who have to endure his bullying every day!

Unlike liberal intellectuals, Tesla workers don’t have any illusions whatsoever about their boss’s character. In the press conference held in front of the Department of Public Health, the workers and their comrades mercilessly exposed Musk’s wrongs and Governor Gavin Newsom’s complicity in them. The event attracted a high level of interest from the local and national media.

Steve Zeltzer, long-time labor journalist, political militant, and a comrade of United Front Committee for Labor Party (UFCLP), explained Governor Newsom’s servitude towards big capital and the danger this unconditional obedience implies for the workers. He pointed out that Tesla workers live all over in the Central Valley region, and that they would carry the virus to many localities in the region lest they themselves get infected at work. Despite this grave risk to a significant portion of the Californian population, said Zeltzer, Newsom remained adamant about not hiring new inspectors to Occupational Safety and Hazard Administration (OSHA), which currently consists of only 200 tired, overworked, over-stressed officials. Zeltzer then singled out the parallelism between Musk’s whims and Newsom’s behavior in following words: “Newsom doesn’t want any more inspectors. Do you know why? Guess who else doesn’t want any inspectors! That’s right, Elon!” Concluding his speech, Zeltzer called OSHA to duty, and raised the demand for hiring 1000 more OSHA inspectors.

Then Carlos Gabriel, a Tesla employee and a member of the NorCal Dandelion Collective, took the floor. In his speech, he exposed the brutal regime of bullying and lies that reigns within the plant. He said he has been harassed by the Human Resources (HR) department of the company for his organizing efforts and exposing the risk of Covid-19 in the factory to the public. There is no proper physical distancing or personal protective equipment provided for the workers, Gabriel said, and whoever raises this point is immediately harassed. When he began to publicize this information, Gabriel was threatened with losing his job, and then later was falsely accused of not responding to the emails about the subject (obviously not true). The officials from the HR department would never talk to him on the phone the moment he would seek a lawyer to listen to the conversation. “Tesla says they conduct their own testing”, said Gabriel, “but that’s a lie. They are just doing tracing”. Gabriel also accused Tesla for failing to acknowledge an outbreak in the plant, although there are indicators at place. “We are discussing about defunding the police”, remarked Gabriel, “the Fremont police has way too much money. Why are we not spending that money on OSHA, and let the police do health inspections?” Thus, Gabriel pointed out the link between the current anti-racist rebellion against police terror and workers’ struggle for survival. “OSHA do your job!” was his concluding remarks.

Other Tesla employees and political militants who wanted to remain anonymous acknowledged Zeltzer’s and Gabriel’s remarks. One member of UFCLP pointed out that the situation in Tesla was not unique to that company. “The University of California (UC) system, the biggest employer in the State of California, just laid off 3000 healthcare workers in the middle of a pandemic!” they remarked.

Thus, Tesla workers and their comrades pointed out the only way forward in the double fight against the Coronavirus and the bosses: incessant struggle based on workers’ own strength, and not begging to the Democratic government for crumbles.

California has been a hotbed for class struggle in the last few years. Teachers, farm workers, teaching assistants of the UC system, nurses, and other workers have been engaging in various kinds of actions from walkouts to strikes one after another. The longshore workers of the mighty ILWU, besides their own struggle against the privatization of the Oakland Port, have been lending their support to every major social struggle of the region. Their port shutdown and massive rally on June 19th, or Juneteenth, with slogans explicitly linking anti-racist struggle with labor’s own struggle, is now well-known.

Tesla workers are now seem to be joining this long march of toilers of all brands. Clearly, if workers raise the banner of struggle in such a prestigious company, this should echo tremendously across all workplaces all over the State.

However, to ensure the success of these individual struggles, workers’ own political party to coordinate all struggles across different sectors is necessary. Only by breaking with the Democrats, who behave like the lackeys of the capitalists, the working class as a whole will establish its own political independence and lead the quest for survival.