A taste of Tahrir at Taksim 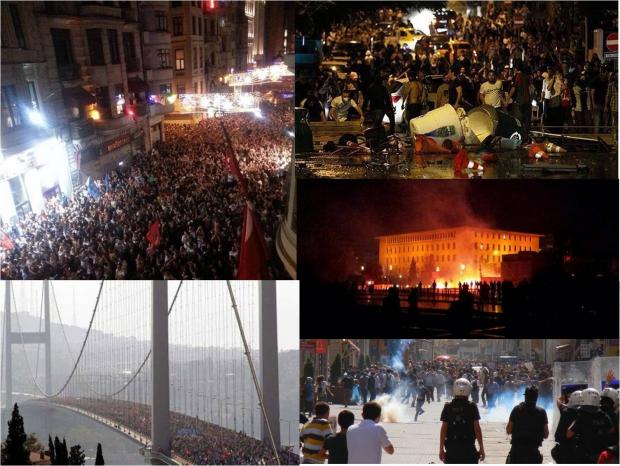 Istanbul has become a battlefield covered by tear gas. The police, no doubt at the behest of Tayyip Erdogan and his AKP government, have been attacking protestors in the centre of the city, near Taksim Square, for five consecutive days. This would have been no news at all: Turkish police are famous for their brutality in dealing with demonstrations unwelcome to the government. Only a month ago, on May Day, they had dispersed a gathering of thousands of workers and unionists using tear gas unsparingly. So nothing new on the police front. This time is different for another reason.

The difference lies in the determination and audacity of the protestors. The first four days saw a growing number of people, reaching many thousands Thursday night, that is, the fourth day of action, set up a camp each night on the so-called Promenade near Taksim Square. Every night, in the small hours of the morning, the police attacked the campers and dismantled their tents, burning them on the last third and fourth nights. The protestors are trying to protect life, the life of very precious trees right in the middle of a city with extremely limited green area. The Metropolitan Municipality of Istanbul, under AKP rule, has been busy preparing the ground to build a shopping mall (in the guise of a historic building) in the place where stands the Promenade now.

The sheer brutality of the police and some plainclothes thugs claiming to be municipal police (it is they who burnt down the tents) provoked the people of Istanbul to run to the aid of the attacked protestors. Istiklal, a major artery that runs from Taksim several kilometres south, a pedestrian zone that is the heart of culture, politics, entertainment and lately tourism, was soon packed full of people  from one end to the other, Taksim Square itself being controlled by the police. Istiklal resounded to chants against the government, some going somewhat rashly as far as predicting its imminent fall.

A certain slogan evoked a limited but real sympathy in the crowd: “Taksim will become Tahrir!” This has been one of the slogans of the DIP (Revolutionary Workers’ Party) ever since the Egytpian masses stumped on their modern-day pharaoh Hosni Mubarak. The slogan chanted by the DIP militants standing at the forefront of the crowd on Istiklal, facing the police, immediately touched a raw nerve and caused an uproar on the part of the lackeys of the AKP government. Beyaz TV, a channel at the pay of the government, passed a caption underneath the screen, repeatedly asking: “What do the provacateurs chanting ‘Taksim will become Tahrir!’ want?”

The DIP has been demanding for some time that the Foreign Minister, responsible for the criminal policy of the government in Syria, and the Interior Minister, whom we call the “Chemical Muammer”, as a reference to the “Chemical Ali” of the Saddam administration, be removed from office. The removal of the latter has now already come squarely on the agenda. There were already unconfirmed rumours tonight that the chief of police for Istanbul has been dismissed. Even if this were true, which is too optimistic, this is not where the cleansing should stop!

The working class, left forces and the youth of Turkey are coming out of a period of extreme political passivity. But for the incessant struggle waged by the Kurdish people, Turkey has been a desert in terms of mass struggles for the past 15 years at least, interrupted exceptionally by the struggle of the Tekel workers (the tobacco and alcoholic drinks company, privatised earlier) in winter 2009-2010, unfortunately sold out by the union bureaucracy. So it would be rash to say that the movement is already at a point of no return. But the spirit is definitely one of regained self-confidence on the part of the masses. What is most important is to see how the organised working class will react. There have been several important industrial actions lately. These may very well radicalise the attitude of some sections of the working class, including the workers of Turkish Airlines, in whose strike the DIP has been intervening very heavily.

I have just left another central square of Istanbul, itself not far from Taksim. The place is packed with people and thousands, even tens of thousands of cars are still slowly moving towards that square. There would have been nothing extraordinary about this—were it not almost three o’clock in the morning. Ankara, the capital city, was out protesting today as well. Izmir, the third biggest city on the Agean sea, is still alive, with street fighting going on.

One blogger said tonight: “Well, Tayyip Erdogan, through his arrogance, has at last united Turk and Kurd, Sunni and Alevi and secular!” Well, this is what we have been saying all along. This was what happened when the Tekel workers entered their two and a half month fight. This is what is now happening on a much more gigantic scale.