Support the struggle of the Palestinian people against imperialism and Zionism for a free Palestine! 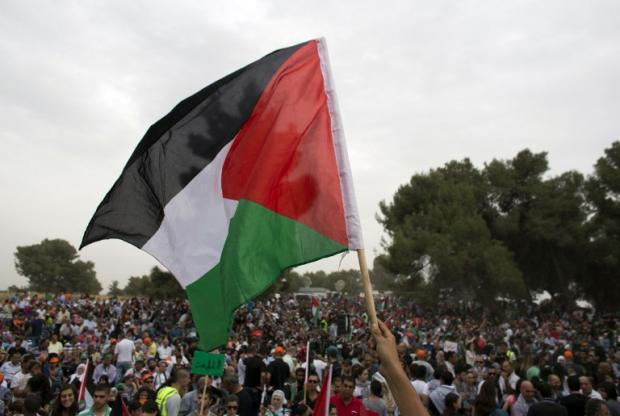 The 4th Euro-Mediterranean Conference in May 2017 had emphasized the implications of the first trip of Trump outside the US in Saudi Arabia and Israel: the formation of a pro-imperialist war axis of Israel, Saudi Arabia, United Arab Emirates, Egypt and Sudan aimed against Iran and its allies in the region, first of all Hezbollah in Lebanon and the Syrian regime of Bashar al Assad.

Inescapably the first target and victim of such unholy alliance is the Palestinian people, their rights of national self-determination, including the right to Return of all Palestinian refugees.

On May 14, the United States opened its new embassy in Al Quds/Jerusalem. Thereby the US imperialism made definitive its recognition of Al Quds/Jerusalem as the capital city of the occupier state. The Palestinian people’s unarmed Great March of Return in Gaza was attacked by the Zionist forces, who killed dozens of civilians, injuring and arresting thousands, thus leading one of the most violent attacks against the Palestinians since the 2014 Gaza War. At the same time thousands of Palestinian political prisoners are in the Zionists’ prisons, without trial, for years.

The Euro-Mediterranean Encounter denounces this imperialist provocation and the massacre of Palestinians in Gaza. Al Quds/Jerusalem belongs to the Palestinians, it is the capital of Palestine as a whole! Free all Palestinian political prisoners!

On July 19, Israeli Knesset, the Parliament of the Zionist state voted the racist Basic Law of the Zionist State as “the National homeland of [only] the Jewish people. Not only Arabic ceases to be an “official language” but a destructive blow is given to all the extremely restricted rights of the Palestinian Arab citizens of the occupied country. Segregation according to ethnicity and religion is established, illegal Jewish settlements are not only legitimized but also praised as the occupier state's highest national value. This was protested by thousands of Israeli Jews in Tel Aviv, who demonstrated against the new apartheid Basic Law.

Burying the Palestinian Question, they hope to open the road to attack what they consider as their main peril, Iran. Trump decided, on May 12, to tore apart the 2015 nuclear deal with Iran; an implication of the return of the commercial and financial embargo on Iran as Trump also threatens to apply an embargo on all the companies that establish economic and financial relations with Iran, including the companies of its allies in the European Union and a significant support to the war policies of Zionism against Iran.

The Euro-Mediterranean Encounter denounces the sanctions and military escalation against Iran. For the defeat of imperialism, of Zionist Israel and of Saudi Arabia in case war breaks out!

An international combat front is needed throughout the region and beyond to strengthen and march together with the rising revolutionary forces, in political independence from the local bourgeois elites and imperialism, in fighting solidarity with the Palestinian, Arab, Iranian, Kurdish and all oppressed peoples.

Fight the imperialist, Zionist and Saudi reactionary war drive in the Middle East!

Imperialists out of the entire Middle East!

Down with Zionism, full support to the national rights of the Palestinian people, including its right to Return!

Down with the US imperialism!

Al Quds/Jerusalem belongs to the Palestinians!

For a free, secular, socialist Palestine in a Socialist Federation of the free peoples of the Middle East!

For the defeat of imperialism and its allies in case of war against Iran, without political support to the mollahs’ regime!