Struggle of thousands of medical professionals in Bulgaria 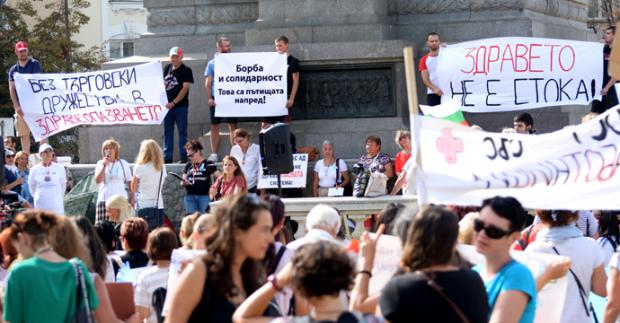 We wrote on behalf of the thousands of medical professionals in Bulgaria who have been "on the street" for 7 months now, protesting, resigning, striking and blocking roads in opposition to unhealthy working conditions and inadequate healthcare pay. Due to the chronic shortage of personnel in the sector, we have to work under difficult conditions, for which we receive a basic salary of less than 250 Euro per month. Therefore many of us are forced to work in two or more places in order to survive. There is a huge lack of staff in the system (about 30,000 short) due to workers who have left the country and their places are currently occupied by pensioners (over 70 years old) or carers (students or people without medical education). We work for 0.12 euro cents an hour night work rate, overtime is almost never paid, there are no mandatory medical standards (one nurse cares for between 30-40 patients in one clinic), which physically does not allow us to take good care of the patients. In kindergartens and schools, one nurse is responsible for 800-1200 children.

The work of medical professionals is not valued, as we, as separate entities (paramedics, midwives, nurses, physiotherapists, laboratory assistants, etc.), do not participate in any negotiations at the national level because this role is legally assigned to the trade unions (CITUB, PODKREPA) and BLS (Bulgarian Doctors Union), which have been keeping us in this humiliating position for years. Not to mention that the collective agreement signed at the national level is desirable for the employers and has not been implemented for years, but remains only on paper. The unions do not monitor its compliance and so far in Bulgaria not one employer has been convicted. At the beginning of this year, thousands of medical professionals from across the country began discussions about the need for general protests, demanding adequate remuneration and improvement of working conditions and mandatory adherence to the agreed and signed collective agreement at the national level. We have asked for help and assistance from the CITUB (Confederation of Independent Trade Unions in Bulgaria) and BAPZG (Bulgarian Association of Health Care Professionals) organisations since most of us are members and regularly pay membership fees. We have sent official letters to the CITUB Headquarters to the person of Mr. Plamen Dimitrov and to the Federal Health Insurance Fund (Federation of Trade Unions in Health Care) to Dr. Kokalov (as yet we do not have an official answer from either of them), and to our surprise they issued a statement to the media after meeting with the Bulgarian prime minister that they "neither organize nor support us". However, we managed to organize ourselves and start a campaign that has been going on for 7 months and has involved thousands of professionals from dozens of cities in the country.

Then came the second surprise for us when CITUB and BAPZG launched an active campaign against us - health care workers. The chairman of the medical federation and the vice-chairman of CITUB, Dr. Ivan Kokalov, began appearing in the media and spoke against medical specialists, calling for an end to the protests. Dozens of nurses were called to personal meetings with hospital executives, where they were threatened with losing their jobs if they continued to protest. The culmination of these actions came in August, when the director of Tokuda Private Hospital in Sofia, Dr. Venelina Mileva, together with CITUB chief Dr. Kokalov, signed the dismissal of the leader of the protesting medical specialists, Nurse Maya Ilieva. As a long-time union activist and chairman of the union section of medical professionals at the private hospital, she has defended the rights of those working there for the past six years. During this time, Maya Ilieva was subjected to tremendous pressure from three different managers who ran the hospital during those years – she was threatened, they tried to bribe her, deprived her of extra pay and punished her repeatedly by disciplining her, one discrimination case, and all of these were familiar to the CITUB trade unions.

However, as she publicly demanded the resignation of Dr. Kokalov for abstaining from his union duties and refusing to support fair protests by medical professionals, he struck a deal with the employer of Tokuda Hospital signing her dismissal. This dismissal was made without warning, without giving reasons for it and without hearing Maya Ilieva, but they did not forget to collect our membership fees. Maya Ilieva's dismissal has sparked an outcry among medical professionals across the country, with solidarity protests being held in dozens of cities and hospitals, and dozens of others being threatened and repressed by hospital executives and union representatives.

Despite the repression of September 11, we managed to organize a nationwide protest in Sofia, where thousands of medical professionals from all over the country came out with "NO FEAR" posters. CITUB realized that repression could not stop protests, but had the opposite effect -workers began massively leaving the bureaucratic organizations and became even more involved in self-organized protests. Then the CITUB, together with BAPZG (Bulgarian Association of Health Care Professionals), decided to take urgent action against the medical professionals. Just two days after our national protest, they announced they were convening a nationwide counter-protest on October 7th. The purpose of the protest rally that the unions are preparing is to continue their policy of attacking medical professionals, to demonstrate strength and to show that they are still in control of some part of the workers in the sector, to undermine the efforts of medical professionals who have been protesting for months with demands for better working conditions, pay and overall health care reform, and replacing our demands with others. It is important to note here that the pledged sums of BGN 950 (EUR 475) were agreed back in 2018 in the collective agreement for the sector of healthcare and should have come into force on 01.01.2019, but .... now we are already in September and they are not yet a fact.

The purpose of this circus is to simulate a working "social dialogue" between trade unions and the government and to undermine the efforts of health workers and their struggles by asking for "NOTHING" from the government and handing it to them with fanfare. Unfortunately, it is already clear to us all whose interests the trade unions and professional organizations in Bulgaria defend and how they work: ‘No worker, no problem’. CITUB and BAPZG are instruments of power which, in their efforts to 'level' the medical profession, have overlooked that there are still people awake to these wrongs, a bell for the untruths, which with its voice brings to the surface the natural need for a worthy respect for human rights because fear is the driving force of unworthy deeds, fear obliterates human values, fear makes us subservient. It is our common responsibility to awaken medical professionals, to restrain corrupt governance mechanisms, to bring the truth to the world in the hope that there is a power other than FEAR that will change the health and social systems in Bulgaria.

A nurse from Bulgaria