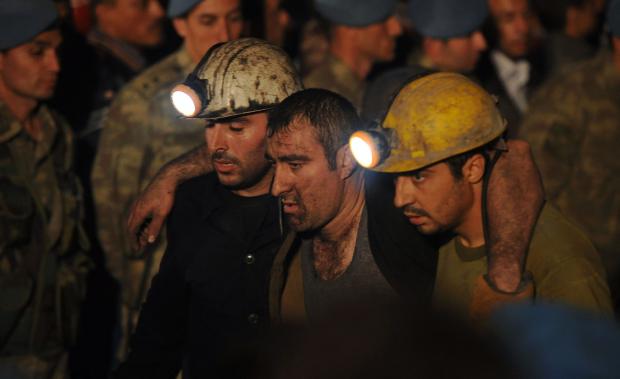 No work-related accident, a true massacre!

Down with the government!

For a general strike until all demands are met!

Tell the people the truth regarding the number of the dead!

An Independent Investigation Commission to bring the causes of the massacre to light!

Stop the de facto state of emergency in Soma!

Arrest immediately the bosses and executives of the criminal mining company!

Nationalise the Soma mine under workers’ control!

Stop privatisations! Renationalise all mines! No private sector to be admitted to mines!

The working classes of Turkey are filled with unspeakable grief. We have sacrificed hundreds of sons and brothers on the altar of the voraciousness of capital. The bitter fruits of the policies pursued by the AKP government for over a decade, privatisation, subcontracting, de-unionisation, disregard for workers’ health and occupational safety, the whole orientation of trampling upon all the gains and acquired rights of the working class, are clear for all to see: hundreds of our working class brothers will forever be buried under the earth, where daily they went down in order to win their bread. We are filled with unfathomable grief! We, the Revolutionary Workers’ Party, present our condolences to the people of Soma and, first and foremost, to the families and next of kin of the deceased workers.

This is no coincidence, nor is it destiny. What has happened is very clear: the bosses tied to the AKP government have had their day! This is the kind of epoch we have been going through! Zafer Çağlayan, former Minister of Trade, now out of the cabinet because he has been documented to have received a 250 thousand-dollar Philippe Patek wrist watch as a bribe from a crook that dealt in illicit trading between Iran and Turkey in return for protection, used to tour the world marketing Turkey, bragging “my worker is so docile as to work longer hours than anywhere else for lower wages and to never report sick”! Whether foreign or domestic, all capitalists were shielded energetically from “unnecessary” (!) costs that would eat into their profits. No overtime payment, no social security, the work force divided through the use of a multitude of subcontractors at the workplace, wages thus driven down, no seniority pay, and most important of all, all measures necessary for workers’ health and occupational safety conveniently shelved! This is the basis of the much-vaunted 10 thousand dollars-per-capita GDP! For the bosses to get rich, the workers have to die!

This is no accident! It is the logical conclusion of policies pursued in the most systematic and conscious manner for over a decade, in fact even longer. It is thus work-related murder. And deliberate murder, for that matter. Turkey has been well-documented to be ranking first in Europe and third internationally in the area of work-related “accidents”. We bury every year around a thousand workers to satisfy capital’s greed for profits. If a government does not move a finger to put an end to this situation, then this is deliberate murder! That is why the work-related murder of Soma is properly to be called a massacre!

Despite the rule of a maximum seven and a half-hour work day in underground pits, the workers have explained that they work eleven hours. The reason why the number of workers trapped in the mine has not been possible to determine is because many are employed unregistered. Some of the families waiting for their next of kin to be discovered live in the pit have told our comrades there that they have sons at the age of 15 working there! The fact that the Minister of Energy and Natural Resources has asserted that this particular mine had been subjected to all necessary checks shows that he is acting together with the mine’s bosses to conceal their responsibility in the matter. There is a crime and the risk of a blackening of this crime! Arrest the suspects! Not a few lower level engineers and foremen, but the bosses and the executives!

This is no fate! The working class, the labourer, the poor peasant, the urban poor, the pensioner, women, youth, all the oppressed, all who were part of last summer’s people’s rebellion, we all have to move in order to get rid of this government and its policies that knows no bounds in defending the interests of the capitalists. Down with the government!

The government is trying to blacken the evidence for the crime. It is trying to impose on Soma a de facto state of emergency. The number of the dead was concealed systematically from the first moment. While government sources insisted on figures below 20, the opposition mayor of Manisa, the province in which the district of Soma is located, cited the figure of 157, which itself has now turned to be a mere first estimate. The workers in Soma are reporting figures way beyond the 201 now belatedly admitted by the Minister of Energy and Natural Resources. Now the government is hiding the corpses, sending the bodies to their home towns, resorting to all kinds of ruse to hide the truth form the people. Troops are being transferred to Soma at full speed. The government is preparing to turn a blind eye to the real criminals and to repress the people of Soma! Hands off the people of Soma already suffering from the death of their loved ones! Stop imposing a de facto state of emergency on the town! Our martyrs of the working class should be seen off with a collective funeral ceremony!

The government cannot be trusted to truthfully reveal the causes of this massacre and the number of our lost ones. An Independent Investigation Commission, comprising representatives of the trade union movement, the engineers’ and physicians’ professional chambers and bar associations, as well as others, should be established and access should be granted for this commission to all data and evidence.

The whole mining industry should be overhauled. All measures necessary to provide for occupational safety at mines should be taken under workers’ control. Privatisations should immediately be brought to an end. All mines previously privatised should be renationalised.

Ban subcontracting! Job security for all! Lift the obstacles placed in the way of unionisation! Hands off the seniority pay scheme! Withdraw the draft law on temp agencies!

The worker is no slave! All who refuse to be a henchman of the capitalist class join the struggle now! Let us change this social order! Only a workers’ and labourers’ government can protect us in the face of death!