Statement of EEK: War against the imperialist arsonists of war in Ukraine! For the international and internationalist anti-war mobilization of the working class! 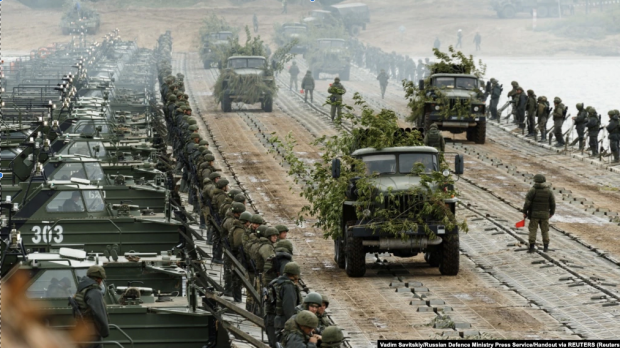 War against the imperialist arsonists of war in Ukraine!

1. From the early hours of February 24, 2022, for the first time since the end of the Second World War, the flames of war destruction flared up in Ukraine, threatening to spread to the whole of Europe and set the planet on fire.

The Kremlin, in a speech by Putin, spoke of a "special military operation against the military infrastructure of Ukraine" which, together with the "Western bloc", threatens the populations of Donbass and "the security of Russia". The thermometer of war fever has risen in the imperialist centers, in the USA, NATO and the EU. Biden, in an emergency address, escalated threats against Russia, which he accused of "unprovoked invasion of Ukraine".

"Unprovoked"? The US President is challenging the intelligence (and life) of humanity. Nobody, especially in these critical moments, can forget that the current nightmare began at the initiative of US-NATO imperialism: With the NATO encirclement of post-Soviet Russia with military bases up to its borders, the direct intervention in the events of Maidan in 2014 and the transformation of Ukraine, under the political hegemony of fascist heirs of Stepan Bandera, into a semi-colony of the West, an American protectorate and an advanced military post for aggression against Russia.

This reactionary turn was followed by the antifascist uprising of workers in industrial Russian-speaking southeastern Ukraine, the incorporation of Crimea into Russia, the formation of the Donetsk and Lugansk People's Republics, the eight-year "hybrid" war in the region with all its calamities for the civilian population. The Minsk agreements, in an attempt to find a compromise between the Kremlin and imperialism, remained dead letter. They were accompanied by the repression of proletarian resistance and communist fighters in Donbass by the Kremlin, the oligarchs and their local guardians, but they did not bring compromise and peace. On the contrary, the flames flared up again when, on the initiative of the USA, the issue of Ukraine's direct membership of NATO was raised.

2.  As repeatedly analyzed and warned by the EEK, as  it was also recently emphasized by the Resolution of the International Socialist Center "Christian Rakovsky" on February 4, 2022, the goal of imperialism, from the violent break-up of Yugoslavia onwards, the process of  NATOization of Eastern Europe, the "color" counter-revolutions, the wars in the Caucasus, the permanent crisis in Ukraine, is the colonisation of the former Soviet space, the imposition of Quisling regimes and the stabilisation of imperialist hegemony in the world, shaken by the unresolved global  capitalist crisis.

From this international and internationalist point of view, the EEK has not kept and does not keep "equal" distances, as the majority of the international and Greek Left does, when the latter does not openly become the tail of imperialism in the name of "democracy". The international working class and the oppressed must turn the main fire on the main culprits, the imperialist arsonists and provocateurs of war, US-NATO imperialism, the EU, their "willing allies" and accomplices, including the Mitsotakis government in Greece.

War on the war of the imperialists! The enemy is in our own country! Tear down immediately the US-NATO bases of death in Greece, in Europe, everywhere!

3. Our anti-imperialist line does not mean that we abandon our firm opposition to the restorationists of capitalism, to the Russian oligarchs and Putin’s Bonapartism.

The war operations are accompanied by repression of communists as even Putin’s faithful ally Genadi Zyuganov, leader of the CPRF admits. We don’t forget or forgive the anti-communist rhetoric of Putin against Lenin and against Bolshevism that were included in his recognition of the People’s Republics of Donetsk and Lugansk before the beginning of the war.

There are three main reasons for these anti-communist attacks.

First, it was a declaration of faith to capitalist restoration reassuring the oligarchs and indirectly the imperialist West that there are no intentions to restore the old USSR.

Second, to mobilize Great Russian chauvinism as a unifying ideological bond playing demagogically with the frustration tied with the collapse of the USSR and the humiliation of the devastated popular masses by the arrogance of imperialism.

Third and extremely important, the offensive against Bolshevism manifests the fear that possibly an initiative of anti-imperialist and anti-fascist action will be taken by the proletarian masses, because never were eradicated the revolutionary traditions of October 1917, nostalgia of the social conquest of the Soviet period and the epic of the Great Anti-fascist War.

There is a fear of a historical return of the repressed, of socialist revolution during the geopolitical storm; a fear which is not limited among the oligarchs in the former Soviet space but within the metropolitan centers of global capitalism shaken by an insoluble and rapidly deteriorating crisis

4. The urgency of the times cannot and should not be underestimated. Imperialism cannot be defeated and a disastrous world war cannot be repelled by the military means of Putinist Bonapartism in the service of the oligarchs of the former bureaucratic nomenklatura, who have ravaged the Soviet heritage and the people's wealth. It is the dissolution of the USSR, and the turn to capitalist restoration that brought humanity to the brink of the abyss.

The only road to salvation and peace is the revolutionary mobilization of the working class internationally, including in Russia and Ukraine, equipping them with a revolutionary internationalist strategy, perspective and organization, for the overthrow of capitalist imperialism which threatens to bury us in the ruins of its crisis, for international socialism, the United Socialist Council Republics of Europe, from Lisbon to Vladivostok, for universal communism!

Now more than ever we need the revolutionary International of Lenin and Trotsky!

The Central Committee of the EEK