Statement of EEK: No to the annexation of Palestinian territories to Israel! Freedom to Palestine! 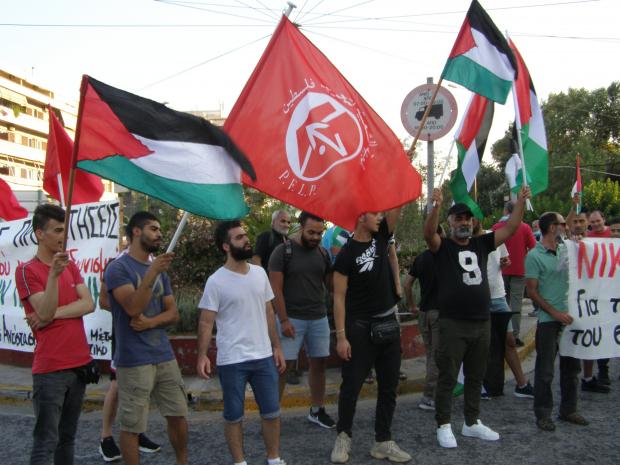 On July 1st 2020, Israel, under the government of the far-right Prime Minister Netanyahu, is committing another crime against the Palestinian people. As it has already been announced, Israel will annex the Jordan Valley to the occupied West Bank, a significant part of the territory occupied by the 1967 war.

The fertile lands of the Jordan Valley and the control of water resources are the objective of the annexation. More than 65,000 Palestinian Arabs live in the region, while around 11,000 Israeli settlers have built illegal settlements in the region – an act that is illegal and contrary to international law.

The whole act of Israel is contrary to international law. The United Nations itself, which can hardly be accused of left-wing or pro-Palestinian politics, recognizes that the territories are Palestinian and that Israel is breaking the law. The Palestinian ownership of these territories was not called into question not even by the 1993 Oslo Agreement.

This is a further crime by the State of Israel against the Palestinian people. Not only are the Arab Palestinian people being robbed of their land and resources, but Israel is also taking the apartheid regime further, by cutting into pockets without communication the territory of Palestine occupied by the Israeli army – to create, if ever to be created, a subservient state “Swiss cheese” version. This imperialist occupying step, with the force of arms, complements the 2018 decision to move the Israeli capital from Tel Aviv to Jerusalem, completing the 1967 occupying policy. At the same time, concluding the racist nature of the Jewish state, Netanyahu passed a law two years ago under which only people of Jewish origin are recognized as Israeli citizens. This law deprives one-fifth of the population of Israel, who are Palestinians - those who were not expelled to Nakba in 1948 - of all political rights. It is tragic that in the state of the descendants of the Jewish people who martyred in Shoah (the Holocaust) people are denied political and democratic rights on the grounds of race and blood(!)reproducing the criminal practices of Nazism.

Netanyahu and the right-wing Zionists justify the new conquering step by invoking the... Scriptures and that there was the area of Judea and Samaria mentioned in the Scriptures. It's a paranoid reactionary argument that wants to turn the tide of history back thousands of years. It annexes an area that has been inhabited for at least 1,500 years by Arabs in order to fulfill the plans of Eretz Israel (“Promised Land”). In this way, Israel and its leaders are throwing new flammable material into the flames of the Middle East war. It perpetuates and expands illegally, by force of arms, the conquest of Palestinian land, turning the Jewish people into an aggressor, an occupying force in the region;an occupation against which the enslaved Palestinian people have the right to resist and fight for their freedom.

Of course, Israel and Netanyahu would not have been able and would not have dared to take such a step if they had not had the support of fascist US President Trump, the economic and military power of American imperialism behind them. It was not by chance that Trump's first trip abroad, after his election, was to the Middle East, where he plans to expand the war and cause a wider one against Iran, which right-wing extremists are threatening with a nuclear strike. War and the theft of oil and gas resources are the toxic derivatives of imperialism in the Middle East and everywhere, particularly acute in its current global crisis and decline.

In this imperialist strategy, and behind Israel's actions as the spearhead of imperialism in the Middle East, Greece is in line, with both its present right-wing Mitsotakis government and the previous SYRIZA government.Mitsotakis a few days ago, as Tsipras before him – along with Pappas, ex-minister and partner of Mionis, representative of the corrupt Benjamin“Bibi”Netanyahu - went to Jerusalem, legitimizing the illegal Zionist occupation of a city that even the UN recognizes as the capital of the Palestinian state. In addition, Israel and Egypt's dictator Al-Sisi have entered into agreements to transport natural gas to the East Med pipeline, exacerbating conflicts in the Aegean and Mediterranean Seas. Especially Greeks interested in the international legitimacy and withdrawal of Turkish troops from the occupied part of Cyprus -a perfectly legitimate long-standing request- how can they be trusted, when they recognize the occupation and annexation of Palestinian territories from Israel?

The Greek people and all the peoples of the Middle East and the Mediterranean must oppose this new imperialist illegal annexation of the historically inalienable Palestinian territories.

Imperialism out from the Middle East, the Mediterranean and the Balkans.

Down with Zionist occupation – No to the annexation of Palestinian Arab regions. No to the deadly embargo on Gaza. Victory in the arms of the Palestinian resistance.

Down with Zionism and imperialism.

Internationalist joint action by the peoples to defeat imperialism and Zionism, to establish a free, non-religious, democratic and socialist Palestine where Arabs and Jews can live in fraternity.

TAKE PART IN THE DEMOSTRATION, on Wednesday, July 1, at 7 p.m. outside the Israeli embassy in Athens, against the annexation of the Jordan Valley.

«From the River to Sea, Palestine will be FREE»