Statement by DIP, EEK and PO: a step forward in our revolutionary struggle 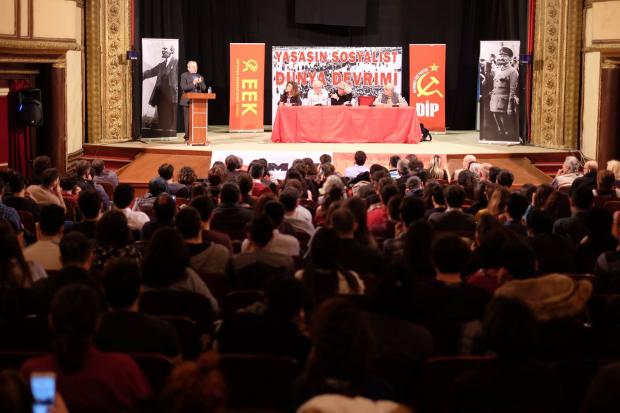 DIP, EEK and PO, on the 4th of December 2017, carried out a previously planned meeting between the respective parties by taking advantage of the international conference that was held in Istanbul.

On the 3rd of December, for the centenary of the October Revolution, by the call of RedMed web network and Christian Rakovsky Balkan Socialist Center, those who regard this most advanced breakthrough of humanity as a guide to action came together in Istanbul, Turkey. The whole-day conference lasting from 11 a.m. to 8 p.m., which was attended by close to 400 people filled with enthusiasm, with a certain circulation in its three sessions, was hosted by DIP of Turkey with contributions of EEK of Greece and became a fittingly accomplished activity for the centenary of the October Revolution.

The conference greeted this glorious attempt in abolishing capitalist exploitation through the conquest of power as the essence of that world-historic event. The commemoration stressed that the imperialist First World War was ended by the working class taking power in Tsarist Russia and starting revolutions in Europe, especially in Germany and Hungary, and that, the Second World War was too, ended by the working class through the smashing of Fascism and Nazism by the product of the October Revolution, the soviet state, and the revolutionary upheavals of the international proletariat. A great lesson for today, as the World is on the brink of a renewed threat of a spillover of war by the interventions of imperialism in the crunch of another Great Depression.

The October Revolution which cannot be taken as solely a Russian revolution could only be celebrated by a feast of internationalism. As a revolution of workers even from various nations within the Tsardom including those of Muslim peoples and as a revolution that penetrated its devastating waves deep inside Europe at first and then extended its influence over Asia and in later stages to Africa and Americas, the Great October Revolution should be and was considered by the conference as the prelude for the epoch of proletarian revolutions.

The conference was attended by a rich international delegation. A spirit of internationalism was in the air not only in the speeches given by the attendees which were simultaneously translated into Turkish and respective languages but also in the strategic idea behind conducting such a conference, like the four Euro-Mediterranean conferences, to provide a medium for convergence of the fighting forces against the imperialist capitalism in its shatters and eventually bringing them in a revolutionary international through discussion and joint work.

Besides Savas Michael-Matsas and Jorge Altamira representing EEK and PO, the contributors to the conference included presences of Comrade Iosif Abramson from Party of Russian Communists (RPK); Çingiz Topçiyev, delegate of Socialist Elm from Azerbaijan; Daniela Penkova, a Marxist economist running the website Dokumentalni from Bulgaria; Aziz Şah, an author of daily newspaper Afrika from Cyprus. Tamás Krausz from Hungarian Marxist journal Eszmelet; Dimitris Mizaras from the Marxist Workers League (MTL) of Finland; Lenka-Movement for Social Justice representative Haktan Recep Ismail from Macedonia; and Yuri Shakhin from Ukrainian organization Against the Current offered their contributions through video messages as well. Several leaders of DIP and Marxist intellectuals from Turkey gathering around Devrimci Marksizm (Revolutionary Marxism -the theoretical journal of DIP which also has a yearly English edition) also made significant contributions covering a wide range of topics.

The whole event was not carried out in the nostalgia of a beautiful moment that has survived for a certain time; but dedicated to display a program of future revolutions and the necessity of construction of vanguard parties to make upcoming revolutions and struggles victorious! As a result, one of the most important highlights of the conference was on the construction of a world party of revolution for the working class.

The resolutions of meeting of the parties

Following the conference, on the 4th of December met the delegates of DIP, EEK and PO to discuss the current situation of the joint work of our parties and to decide on the steps to be taken hereafter. In harmony with this aim, the meeting decided on a series of resolutions regarding to a plan of action.

Among those were the most relevant to the audience, the decisions regarding;

First, three subsequent meetings to be convened within just more than a year. First of these, an international conference, is going to take place in the end of March – early April 2018 in Argentina, followed by a mass public meeting by those attending the conference. The conference will prepare an international congress or a conference to take place in September that is the 80th anniversary of founding of the Fourth International. The last meeting will be hosted in Istanbul, Turkey in January 2019 coinciding with the centenary of the founding of Comintern. A special session in this meeting will be dedicated to Rosa Luxemburg, Karl Liebknecht and Leo Jogisches, three assassinated leaders of international proletariat.

Second, launching of a bilingual theoretical journal in English and in Castilian to disseminate our views on the ideological ground. This publication will not be a platform of factional fights but will deal with the real problems of the world revolution.

Third, launching of a website by the parties, jointly analyzing and intervening in the political issues. For an intervention in the class struggles throughout Europe, the Middle East, Latin America, and all over the World by our parties and a relevant broadcast.

Factory occupation of metal workers with DIP in the leadership

As the meeting continued, news came from a metal factory in Istanbul where DIP was undertaking an organizational work for months. Against the attack of the bosses by layoffs in response to unionization work carried out by the factory committee formed by the workers where militants of DIP were in the leadership, 600 strong workers first started a strike then immediately advanced to an occupation of the factory. Their demands were reincorporation of the fired workers and the acknowledging of the trade union.

One day before, as the conference proceeded, workers from the factory sent their greetings by a message written by the factory committee, apologizing for their absence in the conference which they wanted a lot to participate but couldn’t do, due to tense situation in the factory.

These symbolic events of first, the accomplished conference, second, the extremely important meeting between our parties and a subset of the resolutions expressed herein and third, crowning of the both, by a factory occupation with DIP in the leadership taking place within the limits of the city those two meetings convened signaled a new and a much more mature period in our struggle for founding the International to lead the working class masses to the victory of revolution all over the World.