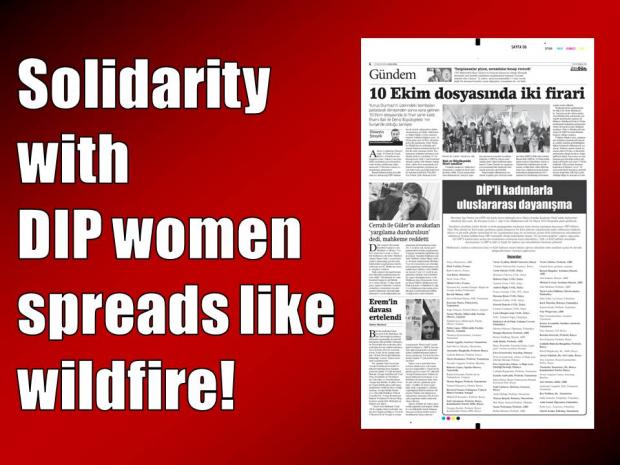 Six women members of the Revolutionary Workers’ Party (DIP) of Turkey are being persecuted for their activity around the International Working Women’s Day. On 6 March 2016, the six women were distributing a DIP leaflet appealing to women to join the action to be held on women’s day in the main square of Çorlu, an industrial working class city west of Istanbul, when police took them under custody because there was reference to state repression of Kurdish women in the text of the leaflet. The public prosecutor later indicted our comrades on the basis of the Anti-Terrorism Act for support to and propaganda of terrorism.

The court case opened at the Assize Court of Çorlu last Thursday, 26 May 2016. The first hearing of the trial was a big success for the defence. The six defendants, young women whose ages range from 19 to 35, put up a courageous example of  political defence, stressing the commitment of DIP to women’s liberation all around the world and the support that DIP extends to the rightful struggle of the Kurdish people for its legitimate rights. The defendants were unrepentant and gave statements that acted as unambiguous instances of political defence on their part.

The lawyers pointed out that the leaflet for which the women of DIP were being indicted was an official statement of the party and openly claimed by the party centre, which implies that the case should go to the Constitutional Court, which alone is powered to try political parties for supposed criminal offences. They therefore demanded that the court declare it is incompetent to oversee the case. In addition, on the substance of the case, they pointed out that the women of DIP expressed outrage and solidarity in the face of the scores of cases of humiliation of Kurdish women by the Turkish “security forces” and that, in the final analysis, what the court case really was making a target was solidarity between women of different peoples (Turkish and Kurdish), solidarity for which DIP women stood resolutely. The lawyers also quoted verbatim statements by many different spokespeople of the AKP, including many members of the council of ministers to the effect that Abdullah Ocalan and the PKK pursued visionary policies that inspired a new dawn for the Middle East and a statement by Tayyip Erdogan from the 1990s in which he says one should be as much against state terrorism as one is against the PKK! On the basis of these and other evidence, the defence lawyers demanded immediate acquittal, in case the former procedural demand was not granted.

The prosecution was cornered and asked for additional time to reflect on two counts (the demand for refusal of jurisdiction by the court and, in case this is not granted, the demand for immediate acquittal). The trial was adjourned to 13 June, when prosecution will present their final position on the case and the DIP lawyers will respond to that final assessment. This will then lead to the final decision of the court, most probably on the same day.

During their intervention, the lawyers presented to the court a copy of a publicity advertisement in a left-wing daily that carried the petition of our foreign friends and comrades with the signatures of hundreds of comrades and friends from around the world. We think that the success of the trial also depends on that support and we thank everyone who subscribed to this petition and, even more so, those who established the link to many of these people.

Six women members of the Revolutionary Workers’ Party (DIP) of Turkey are being persecuted for their activity regarding the 8 March Women’s Day. They are now being tried in court for “support to and propaganda of terrorism” simply because they have expressed solidarity with Kurdish women brazenly repressed and humiliated by security forces.

On 6 March 2016, the six women were distributing a DIP leaflet appealing to women to join the action to be held on women’s day in the main square of Çorlu, an industrial working class city west of Istanbul, when police took them under custody because there was reference to state repression of Kurdish women in the text of the leaflet. The public prosecutor later indicted the six women and the court case is opening at the Assize Court of Çorlu next Thursday, 26 May 2016.

The allegation of “support to and propaganda of terrorism” is a judgment of mere intent. After having touched upon a series of forms of women’s oppression, the DIP leaflet then points out that some months ago, within the context of the war stepped up by Tayyip Erdoğan and the AKP since last summer, the naked body of a Kurdish woman guerrilla had been dumped in the midst of a Kurdish city for display to the public, so as to sow terror amongst the population. The leaflet severely condemns this brazen act of humiliation of women, expresses solidarity with Kurdish women subjected to this and similar other acts of aggression, and salutes the struggle of Kurdish women engaged in self-defence against such practice on the part of security forces. It was this that the prosecutor immediately labelled as support to and propaganda for terrorism.

In its struggle against women’s oppression and for women’s liberation, in the face of a tremendous increase in violence against women in Turkey in recent years, the DIP has systematically called for “self-defence groups” composed of women to fight violence against women, both in the Western parts of the country, in the industrial heartlands amongst working women and on campuses for female students and, quite naturally, also in the Kurdish regions of the country. The fact that it is security forces that have committed this brutal denigration of women does not make this demand any less urgent, but, if anything, even more so.

The court case against the six DIP women is a case of attempted repression of women’s struggle against oppression, of solidarity between the Turkish and Kurdish peoples and of the struggle of DIP for a just and free society.

We call on the Turkish judiciary to drop all charges against these women fighting women’s oppression and for the legitimate rights of the Kurdish people.

Feminists for Another Europe

Savas Michael-Matsas, General Secretary of the EEK, Department of  Communication and Mass Media of  the University of Athens, Greece

Yannis Aggelis, Journalist, member of the Executive of the Union of Journalists of Athens, Greece

Claudio Katz, Professor of Economics, University of Buenos Aires and researcher at the National Council of Science and Technology, Argentina

Kostas Avramidis, Member of the executive of thr Union of Employees in the Technical Institute of Greece, Greece

Maurizio Freschi, Candidate for Mayor for PCL in the commune of Oderzo (province of Treviso), Italy

Antigoni Trouli, Member of the board of the Teachers’ Union ELME of Heraklion, Greece

Nikos Zampoulakis, Teacher – member of the local board of Heraklion of the federation of public empoyees, Greece