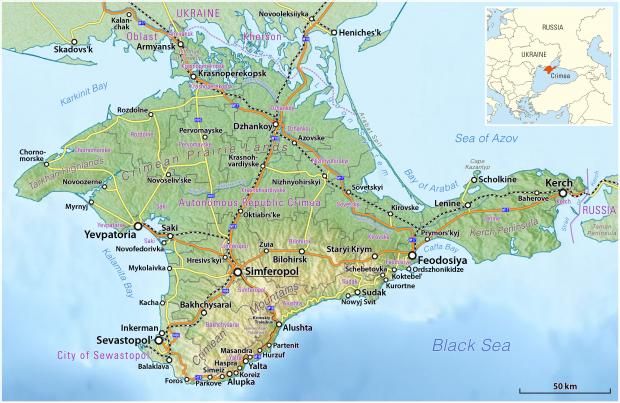 On March 1 five left activists were searched in Sevastopol. Two of them were arrested.

Last months the Russian authorities began to persecute the left activists in Crimea. On November 14, 2017, investigators brought the case to the worker Valery Bolshakov. Bolshakov for a long time headed the Workers Union of Sevastopol, and at present he is the secretary of the Sebastopol branch of the party "The Russian United Labor Front." During the search, he was subjected to ill-treatment, all identification documents were confiscated, as a result the activist can not get a job, and his bank card is blocked.

On February 1, in the city of Yevpatoria, a local anarchist Yevgeny Karakashev was detained. He was detained in violation of procedural norms and beaten. A week later, Karakashev was charged with inciting hatred or enmity (Part 1, Article 282 of the Criminal Code) and in public calls for terrorism through the Internet (Part 2, Article 205.2 of the Criminal Code).
The reason for this accusation was the video "Untitled", published in the social network "VKontakte" at the end of 2014, and a text published in the same social network along with the clip "The Last Interview of Primorye Partisans", which was previously included in the register of extremist materials of the Ministry justice. The last video was posted on November 12, 2017 in a chat with 35 participants. https://ovdinfo.org/express-news/2018/02/08/v-evpatorii-sk-obvinil-mestnogo-aktivista-v-ekstremizme-iz-za-publikaciy-vo At present, Karakashev is in the pre-trial detention center.

On March 1, in the city of Sevastopol, local left activists were searched. The search was carried out at Marxists Igor Panyuta and Ivan Markov, as well as three anarchists Alexey Shestakovich, Alexey Prisyazhnyuk and Artyom Vorobyev. After the searches, they were questioned as witnesses to the case of anarchist Yevgeny Karakashev from Yevpatoria. Shestakovich and Markov were detained. The Sevastopol court found them guilty of producing and distributing extremist materials. On the basis of Article 20.29 of the Code of Administrative Offenses of Russia, Markov was arrested for 10 days, and Shestakovych for 11 days. https://primechaniya.ru/home/news/mart-2018/sevastopolskih-anarhistov-osudili-za-ekstremistskie-materialy/Currently Alexey Shestakovich is serving a sentence in a temporary detention facility in the territory of the Bakhchsarai district, and Ivan Markov in the temporary detention facility in the territory of Sevastopol. There is no connection with them.

Panyuta, Prisyazhnyuk and Vorobyev note that the law enforcement agencies arrived for a search with automatic weapons, acted rudely. During the search they had all computers, mobile phones, Wi-Fi routers and even flash drives removed. The law enforcement officials also seized the paper archives of twenty years ago. Apparently, seized materials are being actively studied, and therefore one can expect new lawsuits and arbitrary detentions. In particular, Valery Bolshakov was charged in this way.

Regional media put forward two versions of searches on March 1. According to one explanation Russian state security persecutes friends of Karakashev, who prove him support. According to another explanation the search was caused with Shestakovich’s intention to hold on March 10 a rally "The presidential institute is an atavism of the monarchy" in order to remind Russian citizens of their constitutional right not to participate in elections, but at the same time "to test freedom of speech in the pre-election Sevastopol." Shestakovich posted the text of application for a rally on his page at social networks https://primechaniya.ru/home/news/mart-2018/v-krymu-i-sevastopole-proshli-obyski-u-levyh-aktivistov-i-oppozicionerov/So, searches and arrests have been held to prevent the action.

Russian state securities creatively reworked this information and attributed to all victims of searches the intention to arrange unrest on March 18. Presidential elections are appointed on that day in Russia.