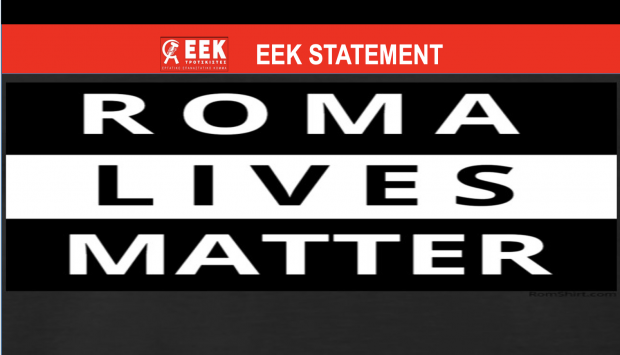 Statement by the EEK (Workers Revolutionary Party of Greece)

A 18 years old young Roma has been murdered by Greek Police in Perama, Piraeus.

– the Mitsotakis right wing government covers up and protect the killers

The murder of the young Roma was committed by 7 police officers of the special DIAS force, well known for its brutality.

Late in the night of Friday, October 22, the DIAS unit, after a long pursuit of three minors Roma, 15-18 years old, who apparently they had stolen a car, in the area of Renti, trapped then in Perama and opened massive fire with their guns. One young Roma, 18 years old, was killed on the spot. Another, 16 years old was seriously wounded by three bullets in the belly, while a third, 15 years old, escaped.

The Headquarters of the Police, the Chief of Police and the Ministry of the Police, misnamed “Ministry of Civil Protection”, with the full help of the bourgeois mass media, controlled, in their majority by the right wing government tried to justify the murder, with the false claim that the young Roma had reversed the stolen car to the direction of the policemen to attack them. The pictures taken on the site of the killing completely disprove these claims.

Furthermore, the police communique and the mass media have raised the age of the murdered boy to 20 years to cover up that the victim was a minor. It is noteworthy that all three young Roma were unarmed, and no life threat existed for any of the 7 policemen. Instead the DIAS unit acted as a executive squad imposing in cold blood the death penalty, without trial and, of course, despite the fact that the death penalty is abolished in Greece.

It is another State crime of the “guards of the law and order”, who are convinced that their position as police officers protects them from any punishment, and entitles them to be executioners. A violation of a misdemeanor character is punishable with death. The incident makes it clear that all.

Police training is to act as shooters. Apart from authoritarianism to a degree of brutality, the act is clearly racist in nature, when it is not the first time that Roma have been killed by police bullets for any or insignificant reason.

The government announced that the 7 police officers were arrested. Their detention is not in any prison but in the Central Police Headquarters. There they found there not only hospitality by their colleagues and superiors but also the high protection of the Minister of the Police Theodorikakos who visited them to “strengthen the psychology of these young officers serving the Greek police”, as he publicly declared. Another minister of the right wing government, Adonis Georgiadis (well known in Greece for his fascist record) publicly congratulated the cops in the media for their murderous action in Perama...

The EEK denounces the murder of the young Rom as a State crime.The main culprits are the bourgeois State and the Mitsotakis government itself, which are building a brutal Police State against not merely petty criminals -while they cover up the real Mafiosi- but against the working class and all the oppressed people. The State becomes the main bastion for the capitalist domination in crisis. For this reason, in preparation for coming social upheavals and class confrontation, the ruling class and their repressive apparatuses unleashes police brutality and covers up for fascist violence. For this reason, recently, the Nazi Giorgos Patelis, although already condemned by the court as the main executioner of the Nazi gang of the “Golden Dawn” that killed Pavlos Fyssas in 2013 was released from prison. He is no exception; other imprisoned members of the same Nazi group are released one by one…

We denounce the systemic racism of the State against the Roma community. We call all workers and oppressed to solidarity against the victims of State racism: Roma Lives Matter! We demand the punishment of the murderers of the young Rom.

No Justice no peace!

Justice now for all the victims of the ruling class, of its State, and of its government!

Join the anti-racist demonstrations in solidarity to the Roma community and of all oppressed!