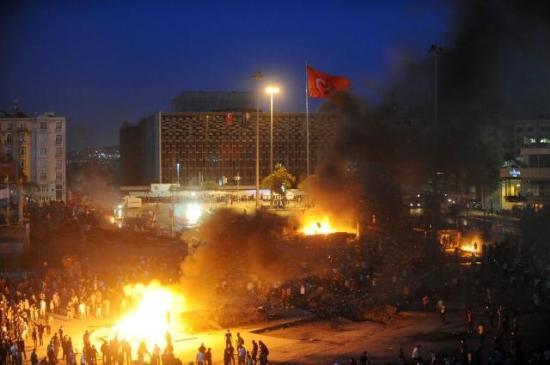 This resolution was adopted unanimously by the International Conference “Europe in Crisis: For a Revolutionary Internationalist Alternative” on 10 June 2013.

The International Conference “Europe in Crisis: For a Revolutionary Internationalist Alternative” salutes the courageous uprising of the people of Turkey against the savage repression by the security forces under the explicit orders of the government of Prime Minister Tayyip Erdoğan, with the mass movement finally defeating the forces of repression and liberating major squares in several cities, first and foremost Taksim square in Istanbul. We fully condemn the unspeakable repression unleashed on the masses in Taksim, in many neighbourhoods of Istanbul, and in many cities of Turkey. We demand the immediate release of all those who have been arrested, the prosecution and punishment of all those responsible for the repression, including those who have taken the political decisions, and the acceptance of the demands of the movement with respect to the dropping of all the plans regarding Taksim Square.

We urge the working class movement to take initiatives leading to a general strike in order to transform this popular rebellion into a powerful wave of class struggle for the emancipation of the exploited and the oppressed. We consider the self-confidence and courage acquired by hundreds of thousands of demonstrators and the millions that support them as an appropriate moment for not only making certain demands accepted, but also bringing the reactionary Erdoğan government down, overthrowing the whole system of oppression and exploitation in Turkey, putting an end to the political rule of the bourgeoisie, and achieving the conquest of power by the working class and the labourers.

Adopted unanimously by the International Conference “Europe in Crisis: For a Revolutionary Internationalist Alternative” on 10 June 2013.