Resolution of the Central Committee of the Revolutionary Workers’ Party (DIP) 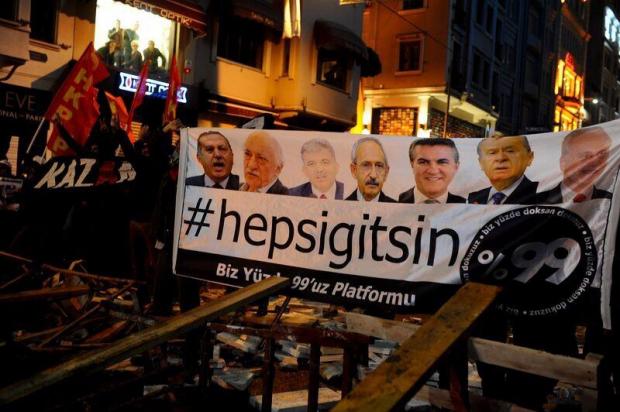 The DIP at the barricades in Taksim, Istanbul, on the night of 27 December 2013

Turkey is in the convulsions of a massive crisis ensuing from the unearthing of immense corruption that involves government ministers, their sons, including the son of the prime minister Tayyip Erdoğan himself, construction and real estate magnets, the CEO of a major publicly owned bank, and others. We are presenting below a resolution published by the Revolutionary Workers’ Party (DIP) of Turkey. Since the publication of this declaration, a popular movement has made its debut in all parts of Turkey reminiscent of the popular rebellion of this past summer.

Let the government resign!
Let all of them go!
Prepare the ground for a workers’ and labourers’ government!

Turkey is in the middle of a profound political crisis. It has become apparent that the AKP government is entirely drowned in the mire of corruption. From shoeboxes and safe boxes filled with money, the filth of a purely bourgeois government is spreading forth for all to see. Prime minister Tayyip Erdoğan, the leader with primary responsibility for this infamy, can no longer cover up the facts.

Erdoğan first hoped that he could relieve himself from the pressure by summoning the ministers who are charged with corruption to resign. However, he has now been cornered even further after the resigning Minister of Urbanization and the Environment made a plea for Erdoğan to resign as well. The prime minister has deepened the crisis further by ordering the police loyal to him to block a new corruption investigation, which is said to involve the Turkish State Railways.

Regardless of the political intentions and links of the public prosecutors that have initiated the corruption probe [they are alleged to belong to Fethullah Gülen’s religious network, which supported Erdoğan’s AKP for a very long time, but has entered into a conflict with it in recent years], Erdoğan’s appointment of new prosecutors to the ongoing probe and the change of the rules for the functioning of the judiciary by requiring the public prosecutors to seek the approval of administrative authorities before carrying out an investigation amount to an attempt to turn the judiciary into the AKP’s law office rather than blocking a conspiracy. That Gülen supporters have created a camarilla within the police force is no secret. However, by blocking the implementation of the arrest orders from the prosecutor’s office with the help of police forces loyal to himself, Erdoğan is clearly attempting to turn the police into the AKP’s illegal paramilitary organization.

Erdoğan is talking about a conspiracy and the involvement of foreign forces. There is indeed a conspiracy and the involvement of foreign forces, especially US imperialism…However, the main factor behind the chain of recent events is the popular rebellion against Erdoğan in May-June 2013, which led all of his allies to realize that he is no longer capable of ruling Turkey in stability and consequently to abandon him one after another. For this reason, Erdoğan is in no position to oppose the US or the conspiracy. Let Erdoğan seek the help of those forces by whose support he has so far maintained power! Let him beg the US for help and ask for forgiveness for his past mistakes. Let him go to the Islamist capitalists of the MÜSİAD and solicit their help. Let him plead with the Saudi king and the emir of Qatar. The workers who have been exploited mercilessly by the bosses of the construction industry, who work without even basic insurance, who die as a result of work crimes (so-called “work-related accidents”), who are condemned to work in conditions of slavery for a pittance and who are gassed each time they step out onto the streets to reclaim their due will certainly not come to his rescue!

No matter how many votes the AKP got in the previous elections, it has become clear that it defends the interests of a tiny minority exploiting and oppressing 99 percent of the people. This government in disarray has no future but to collapse. Let the government resign!

However, we also will not buy AKPism without the AKP! We don’t have the slightest confidence in the ambassador of the US [who has lately been deeply involved with day to day political manoeuvres in Turkey], Gülen, Kılıçdaroğlu, Sarıgül, and Bahçeli, the other representatives of the same blood-sucking minority of exploiters. They are the ones who understood after the popular rebellion triggered by the Gezi events this past summer that Erdoğan lost his capacity to coordinate the offensive against the working class, to repress the workers’ reaction to a possible economic crisis, or to liquidate the Kurdish movement. That is why they have decided to prepare an attack on the working and oppressed masses with a force more reliable than Erdoğan’s. Let all of them go! ꜟQue se vayan todos!

A force capable of forcing all of them to go can be created by reorganizing the potential generated by the popular rebellion triggered by the Gezi events of last summer around the interests of the working and oppressed people who comprise 99 per cent of society. Against the pro-US AKP administration and the possibility of the rise to power of the opposition bloc more pro-US even than Erdoğan, the 99 per cent is the only alternative: For a workers’ government! It is now time to build the forces that will go into the making of this government!