Reports received from South Pars Asalouye about the strike of petrochemical workers in Iran! 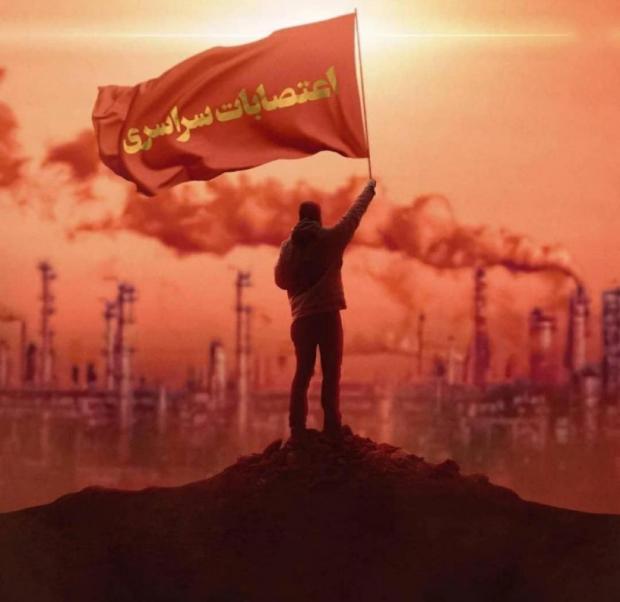 The first report from #Southern_Persian_Asalouye: 10 October

On Monday, nationwide strikes took place in the region, where more than four thousand workers participated.

The strikes started at Bushehr Petrochemical and extended to other petrochemicals and refineries in the region. (including in the Damavand ASU unit of Bakhtar Petrochemical Holding)

On the same day, a large number of workers were arrested by the repressive civil police.

The volume of arrests has grown until today. The repressive force has even raided the dormitory of "Hangam Petrochemical" and other petrochemicals to arrest workers.

At least 100 workers have been arrested.

Several workers have left their workplace at night for fear of arrest.

The leaders of the strike have been called to the headquarters of the police in several stages to hand over the workers in exchange for cooperation, which has been rejected so far.

It should be noted that efforts have been made to free the imprisoned workers, but they have had no results.

The judicial system (read: a system of oppression) has agreed to release the group with the condition that the workers provide their permanent contracts, which does not apply to many of the workers due to some being immigrants and others working on temporary and or private contracts.

The second report from #Southern_Persian_Asalouye:17 October

Meeting with a number of arrested workers in South Pars

1- The process of releasing workers takes place in groups of several people, and a proportionate number of people are arrested once some are released.

3- The workers have been temporarily released due to the bond of the salary slip, and they can be immediately summoned by the arresting unit or the courts

4- After being released, the workers have not been able to show up at their place of work until now due to the refusal of permission from the Petrochemical Protection Unit. Some of them have returned to their places of residence and some of them are in the dormitory in an undecided manner.

5- The effects of beatings are evident on the bodies of the workers who refuse to take photos and documents due to being intimidated by the repression forces.

6- The number of arrested workers is more than 150 and fifty of them are kept in Bushehr Central Prison.

7- Every day, various petrochemical plants are attacked by repression forces, and the process of arresting the workers has continued until now.

The third report from #Southern_Persian_Asalouye: 19 October

Divisions among workers and their effects on the strike:

1. "Project workers" who work for contractors on a temporary contract, the number of such workers increases and decreases depending on the contractor's wishes and at different work intervals.

Generally, project workers are hired using their resumes and the introduction of another colleague.

On the other hand, the chartered, permanent workers are hired mostly with the intervention of politicians, for example, via relations and orders of some representative or Friday imam, etc.; of course, there are also a few people who are hired on a trial basis.

Due to the fact that the South Pars region is one of the critical bottlenecks of the Islamic Republic, in the past years, the Revolutionary Guard's influence in this region has increased in such a way that in most of the petrochemical and refineries, the key and main forces such as the CEO, the head of operations, or the head of maintenance are selected from among those referenced by the RG. Therefore they are selectively approved by the system.

The strikes of the past several years are mostly related to the project forces, which are petrochemical and refinery builders, who demanded widely in the last two years the improvement of the legal situation and accommodation, the number of working days, and paid leaves.

It should be noted that the legal conditions, accommodation, and benefits of the chartered forces are naturally better than the project forces; their close relationship with the state and the fear of losing their jobs caused them not to participate in these strikes. Even if these workers have a role, they will never fully be with the project workers.

Last week's strike in South Pars was also done by project workers, and no chartered forces participated in these strikes. The recent strike was a day and a half to two days in total, and the strikes failed due to the repression of the security forces, the pressure of the project forces, and the arrest of a large number of workers.

So far, none of the chartered forces has gone on strike in the region.

Based on the experience of fifteen years of work in South Pars and the general knowledge of the region, it can be said that these strikes will be more widespread and powerful if the chartered workers support the project workers.