Confinement in the Aegean islands: a game to the detriment of all 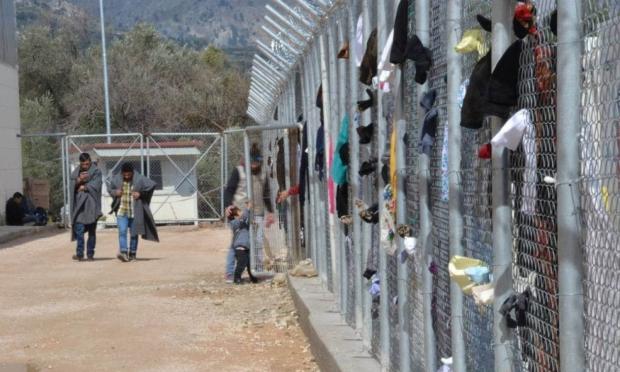 Since a long time, friends and supporters from Greece, Europe and America have been sending me messages with two questions. What is the situation on the islands as far as the refugee issue is concerned and how can they help?

I will try to answer as thoroughly as possible.

The situation on the islands is bad. The deliberate impoverishment of refugees increases crime and this in turn, increases xenophobia.

Solidarians and volunteers are not allowed to visit VIAL since the beginning of March.  Under the pretext of the corona virus, the movement restriction measures in the camp are still in force until the beginning of August, although no cases have been registered in VIAL.

A visit we made to give diapers and a mosquito net to a newborn (who lives in a tent with 10 other tenants) had a bad ending.  While we were driving on the street and not in the area of ​​VIAL, the police made a thorough search of our car, photographed our identity data and asked us to leave immediately to protect our health.  By the way, we wore a mask, they did not.

The food distributed in VIAL ends up in the trash many times.  People tell us that due to the high temperature until it is distributed to so many thousands of people it has deteriorated and they have to stand in line for about 2 hours in order to get it.  Running water does not have a continuous flow.  The situation is somewhat better than 2 months ago but without a permanent solution to the problem, that is common throughout the island of Chios.

Garbage is still being dumped in VIAL, which has now been expanded with the blessings of the government and without the permission of locals who see their property becoming cesspit and landfill. All this contributes to the destruction of the environment and the risk of transmitting infectious diseases.  Humans live with mice, snakes and insects!  The refugees are forced to burn the rubbish to reduce their volume and remove the rodents, with the result that they are rightly and unjustly blamed for the fires in the area, the most important of which occurred on July 1st.  The government and the Municipality, however, state that the Ministry of Immigration receives an amount in excess of one million euros and a very large percentage of this money was intended for cleaning!

Some people who have been to Chios for a year are still waiting for an interview and the answers from the asylum take a long time. Thousands of rejections are given according to the new bill even to the ethnic groups that are victims of war, such as the Syrians.  Suicide attempts, sharp object cuts, etc. are common. The population of VIAL receives minimal psychological support since living in such a place, aggravates the existing mental traumas that every refugee "carries" coming to Greece.

Many refugees who have received papers and have their restrictions lifted are forced to leave the camp and find accommodation and work on their own.  Most leave for Athens without any support, some come to the city of Chios where they live in courtyards and beaches.  That is, the problem is transferred from VIAL, to the city of Chios and then to the mainland.

There are no jobs for the refugees - not even for the locals. Few recognized refugees who managed to find work stopped because their employer was harassed by locals because he hired them.  Greek language programs are not offered by the Greek state, neither for adults nor for children, who this year attended the schools of Chios for a total of 11 days!  Education is based on courses offered by non-governmental organizations inside and outside VIAL.

Many refugees rent apartments in the city.  Due to the distribution of food that we do, at the invitation of the tenants, we have visited them.  Under normal circumstances, some apartments would not be rented at all or would be rented for half the price paid by the refugees.  The rent is not based on the real value of the space but according to how many people live in it.  There is a phenomenon of profiteering that increases even more, because everything is done secretly and informally.

Volunteers from abroad are at a major impasse.  People who left their countries to help the refugees and supported these people with clothes, shoes, items for newborns, sanitary ware, etc. are increasingly discouraged.  When they come as ordinary volunteers they can not get permission to make distributions.  When they try to be organized as an NGO so that they are completely legal, they face a huge bureaucracy that is impossible to overcome.  NGOs alone have become the red flag for the locals.  The extremist scenarios are raging, blaming any illegality on them, citing arguments such as that NGOs are bringing refugees to Greece, that NGOs are receiving grants that could go to Greeks, etc.  All these myths act as a deterrent to the provision of services and goods to the refugees, but without the local thinking that the more impoverished the refugees become, the more the incidence of crime and illegality will increase.  The hungry will steal food, the naked will steal clothes, the desperate…?

Fascism in Chios holds up well. The arson in the Solidarity warehouse has not yet been clarified.  Threats are unleashed against volunteers, against Solidarity, against refugees on social media without the intervention of a prosecutor.  Extreme sites target solidarians with the tolerance and in some cases the support of elected local authorities.

Solidarity is now offered secretly as there have been violent incidents against solidarians, most recently the beating of a priest's wife by 3 women, because she was going to VIAL to give clothes to the refugees.  People who give things, money, etc. to refugees now more than ever want to remain anonymous.

The pushbacks in the Aegean continue with the mayors of the islands congratulating the port authorities for guarding the borders so well (as a result of the deportations, i wonder?) And the government announcing the almost zero flow rates.  There are few reactions from the European Union and the European Commissioner and Frontex have not taken an official position on this very serious issue.

How one can help this situation remains a difficult question.  In a country where the state apparatus does not work well even for the locals, how can it work for asylum seekers and refugees? How much can some citizens' initiatives improve the situation, when the system itself targets and criminalizes in every way and opportunity the solidarity actions?

The testimonies of international volunteers about the situation of refugees in Greece are very important.  Reporting the situation and getting the right information is the first step for change.  In many ways, we have managed to convey to Europe the drama of these people, the treatment they receive in Greece, the weight that the islanders lift and the impasse to which the local populations are led by the gathering of so many thousands of people in such a small space. VIAL currently has 5,000 people with accommodation standards of 1100. In addition, the spaces are unsuitable and the proximity of this informal city of different ethnicities with a small village of 800 inhabitants creates many problems and frictions.  But information alone is not enough.

The root of the problem is multifactorial and requires a large and time consuming analysis.  What we can manage as individuals is our responsibility on a personal level, that is, to be properly informed and not to be victims of the false news that some extremists are spreading in order to intensify the already tense situation.  To realize that the vast majority of immigrants and refugees are the victims, the puppet in the hands of politicians and not the perpetrators.  And when we realize this, then the issue will be placed in its true dimensions and in the long run may be the hope for harmonious integration in our society of those people who want it is born, with the prospect of a better life for both locals and refugees.

Data have been collected from personal testimonies of solidarians, from volunteers at VIAL and from residents in the hosting area.