Presidential election in Poland in 2020 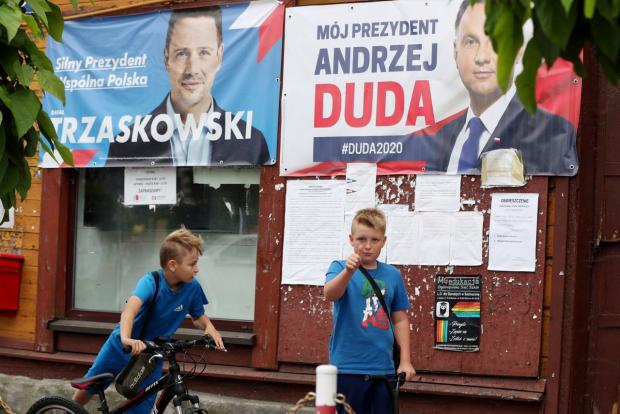 Incumbent president Andrzej Duda won in the second round of presidential election with the result of 51.03%. 68% of voters went to the polling stations on July 12th, which was a record turnout. Andrzej Duda associated with post Solidarity movement  conservative party Law and Justice (Prawo  I Sprawiedliwość (PiS)) was voted with the majority of labourers, farmers, unemployed people and residents of small towns. Rafał Trzaskowski associated with post Solidarity Neo-liberal opposition mainly Citizens Platform party (Platforma Obywatelska (PO)) was voted by entrepreneurs, managers and residents of large cities.

The incumbent  President’s program was focused on emphasising the pro-social character of the government  and maintaining the child welfare benefit, increasing unemployed benefit and introducing solidarity benefit for employees who lost their jobs during the pandemic of covid-19 and prohibition of privatising the health service. The program of his opponent, Trzaskowski was focused on topics more important to middle class expectations such as urban investment, clean air and equality between women and men in the labour market. The government and Andrzej Duda have  tried to maintain impression that they are for poor people and entrepreneurs as well but the so-called “protective shield” during the pandemic showed that this conservative class solidarity ideology supports entrepreneurs at the expense of employees. The money flows supported companies which not necessarily lost profits during pandemic while employees especially on junk contracts were left without any support.

For this reason both the government side and the opposition as well built their rhetorics referring to identity: Duda to tradition and religion closer to lower class and Trzaskowski to modernity and  “Europeanness”, both upholding an anti-communist narrative serving as invective against opponent. The side of Andrzej Duda tried to play with horrible anti-LGBT campaign which was met with indignation of liberals and accusations against Law and Justice ruling party and its candidate for presidential position. But also liberals related with Trzaskowski and some part of the parliamentarian left responded with classist Darwinistic narrations against all those who would like to support Andrzej Duda.

It can therefore be assumed that it was not so much the conservative narrative that caused workers and farmers voting for Duda but classist contemptuous response of the liberals that caused that working class voted not pro-Duda but against Trzaskowski neoliberal camp. Trzaskowski was associated with  re-privatisation of tenement houses in Warsaw which caused lots of harm. Moreover people remember how low the hourly wages were when his party was governed.

Trzaskowski declared a pro-EU policy and is associated with the interests of Germany. Duda declared sovereignty but it is obvious that he is the executor of USA policy. In fact this factor which is absent in the consciousness of Polish society will be of importance for Polish state policy in the coming years.