Popular Insurrection in Haiti: A tendency in Latin America 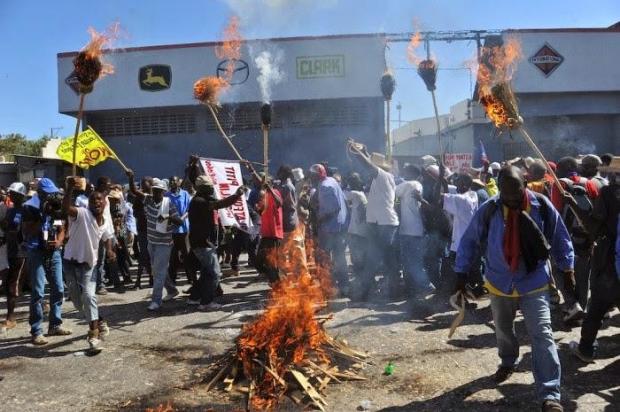 At the beginning of July a popular uprising gripped the Caribbean country of Haiti. Below we publish, in abbreviated form, an article on this uprising published by Prensa Obrera, the web site of The Partido Obrero (PO, Workers’ Party) of Argentina. The translation into English was done by RedMed.

The announcement of the increase in the price of gasoline and kerosene triggered, this Friday in Port-au-Prince, the capital city of Haiti, a mass insurrection. The government has announced the entry into force of a 37% increase in the price of gasoline, 40% in diesel and 50% in kerosene (commonly used for the lighting up and heating of households). The measures are part of a package of “agreements” signed by the government last February with the International Monetary Fund (IMF).

The National Police found itself totally overwhelmed faced with the magnitude of the uprising. A policeman died by lynching and a security guard was burned to death in his own car. Burning of vehicles, barricades thrown up and looting spread quickly all over the capital city and in different points of the country.

In spite of the fact that the president and the prime minister announced a retreat on the price rises last Saturday, the protests continued. Sunday the cities of Cap-Haïtien (North), Les Cayes (South) and Malpasse (Southeast) at the border with the Dominican Republic joined the insurrection, with the burning of customs’ offices in the last one. The teamsters trade-unions called for a strike for Monday and Tuesday, which paralysed the principal cities.

The social situation is like a pressure cooker.  In 2004, after the coup against the government of Jean-Bertrand Aristide (himself described as “populist”) the Minustah was created, a military force led by the troops of Brazil (Lula) and Argentina (Néstor Kirchner) with the collaboration of all Latin-American countries except Venezuela and Cuba, and with the participation of China. The funding of this occupation force was undertaken by the UN or, in other words, by the imperialist forces. The “peace mission” quickly turned into the main target of popular resentment and international criticism.  Minustah became the centre of all sorts of abuses, including scandals of the sexual exploitation of minors, and was responsible for a cholera epidemic, affecting 800 thousand Haitians and causing ten thousand deaths. The horrific experience led to the suicide of a general of the Brazilian army… The Minustah was replaced by a new military force of the UN, the MINUSTJUTH, a downsized force within which the Argentine gendarmerie also took part.

The question of political leadership

According to the assessment of the journalists on the ground, the insurrection has no coordination and lacks a political leadership. It is true that it was preceded by a general strike called by the trade-unions but clearly with no strategic orientation. This means, first of all, that populism in Haiti, historically very powerful within the masses, carried out no work of political preparation and that it is absent in the uprising as a political tendency. It is likely that it will be called upon by imperialism, as has happened in the past, when the dictatorship of the father and son Duvalier was disintegrating, in order to divert the popular movement toward “institutional channels”. This is what has happened repeatedly in Latin America. The Haitian masses were deprived of a formal education but this does not mean that they are less politicised. The priest Aristide, who miserably failed after acting as the conveyor belt of the Democratic Party of the United States and of the Clinton family, took power to put an end to the uprising two decades ago. Last year, without receiving the slightest attention from the international press, the trade union declared a general strike to demand the rise of the minimum wage. On the other hand, a “rift” appeared in the government, whose Minister of Communications belied the President regarding the backtracking of the prices to the former level.

The crisis of leadership of the Haitian insurrection once again puts the political responsibility of the whole class-struggle left and of the militant fighters in Latin America on the order of the day.  A united front on a continental scale is necessary to support insurrections (Haiti), popular uprisings (Nicaragua), necessity of a workers’ and socialist way out of social collapse (Venezuela) and the crisis of  all political regimes in Latin America, in the perspective of a Workers’ Government and the Socialist Unity of Latin America. The intervention in the crisis of all the capitalist political regimes in Latin America, “neo-liberal” or “populist”, and in the struggles of the workers and peasants is clearly on the order of the day. The global crisis, on the one hand, and popular mobilisation, on the other, have opened up revolutionary perspectives which should be politically prepared. The current government of Haiti is the result of fraudulent elections, in which it obtained one fourth of votes.

Facing this collapse we call: for governments of working people (workers and peasants) and the Socialist Unity of Latin America.

In Haiti, concretely, we call: immediate retreat of the MINUSTJUTH.

Argentinian troops out of Haiti. Expropriation of big agrarian property, of export monopolies and of the banks. For collective workers’ control and management.

Turn the general strike to an indefinite one. Election of a National Committee of Strike. Formation of workers’ and peasants’ militias.