Police attack on the anti-NATO protest in Warsaw 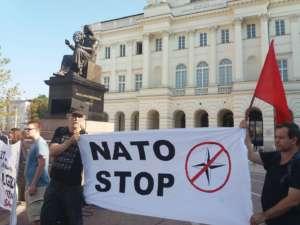 On September 1, which is the anniversary of the attack started by Nazi Germany on Poland in 1939, the head of American imperialism Donald Trump was meant to be visiting Poland to join the official commemoration. The Anti-fascist Students Committee called for a protest on the exact day he was scheduled to visit the country against the invitation of Trump and Poland’s right wing government’s collaboration with US imperialism. The collaboration between Poland and imperialist USA is advancing, especially against Russia. Before this, in June Trump had announced that US imperialism would be sending 1,000 more troops in addition to the 5,000 already in existence in Poland, to strengthen the encirclement of Russia. The protest was also against the war policies of imperialism in Venezuela and the Middle East.

Trump cancelled his visit to Poland at the last minute because of the occurrence of Hurricane Dorian. However, the official event took place gathering several imperialists, including U.S. Vice President Mike Pence filling in for Trump.

While imperialists shed crocodile tears for the millions of lives lost during the Second World War, watched ceremonies and gave speeches, anti-imperialist and leftist circles gathered in front of the Nicolas Copernicus Monument in Warsaw for an anti-fascist and anti-NATO assembly.

The police force attacked the crowd who were starting to march with anti-imperialist slogans and detained two protestors. A protestor who gave a speech against NATO and the government’s anti-communist policy during the protest was targeted intentionally. The police beat him, who was holding a “NATO STOP!” banner and a red flag during the protest before detaining him and also injured another protestor. Two protestors that were detained were held in the police station for hours for the accusation of violence against police officers, despite the clear video footage of the police attack proving that the opposite happened. We condemn the police violence and state oppression on the anti-imperialist and anti-fascist organizations, circles and demonstrators! NATO was, is and will never be welcome in Poland –or anywhere else in the world!