The People’s Program for Overcoming the Crisis 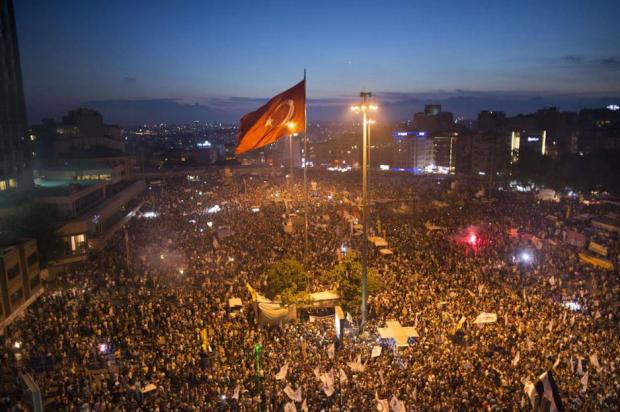 The Revolutionary Workers’ Party (DIP) of Turkey has issued a program for overcoming the present grave political crisis in Turkey in a manner that will serve the interests of the working class. We publish below the English translation. The original text was written in Turkish.

Turkey is in the midst of a deep crisis. Politics is in crisis, the judiciary is in crisis, the state is in crisis, and the economy is gradually drifting into a crisis. What has now brought to the surface conflicts of interest that were either delayed or covered-up before is the popular rebellion of June 2013 that started in Gezi Park. It should again be the people to find a way out of this crisis in line with its own interests. The people should cede no ground to bourgeois forces, spanning from the AKP to Fethullah Gülen’s religious network, from the United States, poking its nose in every political matter in Turkey, to the opportunistic Republican People’s Party of the secular bourgeoisie, from the military, trying to raise its voice once again, to the fascist Nationalist Action Party. These may discuss and clash each other, or even wage war, but in the end they will surely unite in order to oppress the working people. For this reason, we should impose our own solution to the crisis without tail-ending any of these bourgeois forces.

The government and the judiciary are both mired in corruption!

The investigation files documenting numerous cases of graft and corruption should not be left into the hands of either the government, or the judiciary, the latter under all kinds of intense pressure of an extra-legal nature. The government happens to be the defendant in this corruption case. On the other hand, Fethullah Gülen’s network, which played a crucial role in exposing the graft and corruption scandal, has been doing this in order to pursue its own interests rather than defending those of the people.

Remove all terms of secrecy on the bribery and corruption files! Establish an independent investigation commission composed of the representatives of trade unions, bar associations, and professional chambers, especially the TÜRMOB (certified public accountants) and the TMMOB (engineers and architects)!

These infamous cases of corruption are indications of a much bigger problem that have come to surface only partially. The root cause of the embezzlement of millions of dollars is the private ownership of urban land and the execution of all land development matters by the TOKİ (the Housing Development Administration of Turkey) in such a way as to enrich private contractors, even though it is itself a public entity.

It is not enough to punish the briber and the bribe taker! Drain the marsh of corruption completely!

Nationalize all public land! Stop the enrichment of private contractors through mass housing and infrastructure projects!

Execute all government investment on the basis of a public budget, with public workers, and under strict popular supervision!

We are familiar with the policy of “bleed state enterprises to loss and then sell them off” since the era of Turgut Özal, the pioneer of neoliberalism in the 1980s. Corruption at the Halkbank (the People’s Bank) has nothing to do with its status of state bank, but stems from its lack of supervision. Difficult though it may be to supervise state banks, supervising private banks is close to impossible.

Nationalize all banks under workers’ control! For a single state-owned bank in support of the workers, peasants, and small business owners instead of supporting parasitic bosses!

In order to cover up the graft and corruption scandal, Erdoğan started to bargain with the military at the recent meeting of the National Security Council. Using the generals in prison as hostages, he is trying to overcome the difficult situation he finds himself in with the assistance of the armed forces. Secular nationalists supposedly of the left, who only recently saw an alliance with the fascists against Erdoğan as legitimate, nowadays do not refrain from being a part of the negotiations aiming to save Erdoğan.

No to the use of the Ergenekon and Sledgehemmer cases to cover up graft and corruption!

We do not have the slightest opposition to the Turkish government’s violation of the embargo against Iran. However, filling shoe boxes with millions of dollars of graft money under the pretext of trade with Iran is the worst kind of opportunism. We demand the Turkish government to explicitly and officially reject the embargo against Iran. The imposition of constraints by imperialism and Zionism on Turkey’s relations with its neighbors is unacceptable! But even this is not enough! Remove the NATO missile shield deployed in Turkey against Iran!

Enough with the AKP government’s conspiracy theories about imperialism! NATO itself is a center of imperialist conspiracy. Let Turkey leave NATO, the initiator of reactionary counter-insurgency activities in Turkey! Close US military bases in Turkey, including the one in İncirlik! Declare the US ambassador Ricciardone, acting like a colonial governor-general rather than an ambassador, persona non grata!

Imperialists, religious fraternities, bosses! Get out of the way between the Turkish and Kurdish peoples! The Kurdish question is not a matter for haggling, but a question of equality, freedom and fraternity! Whatever rights the Turks enjoy, so should the Kurds! The solution of the Kurdish question is impossible with this government, which is trying to play Massoud Barzani against the PKK! Erdoğan’s eyes are set on the oil reserves in South Kurdistan. The emancipation of the Kurds will be hand in hand with the workers and laborers of Turkey!

Secular nationalists entering into unsavory negotiations with Erdoğan in order to save the putschists and the notorious counter-insurgency murderers pay no heed to the AKP mindset similar to that of the Ottoman Sultan Yavuz Selim![1] Life security, equality, and freedom to the Alawis!

Bargaining with Erdoğan amounts to selling out the nationwide popular rebellion that started in Gezi Park. It means condemning women, gays and lesbians, intellectuals, the youth, and artists to continue being the target of Erdoğan’s insults and attacks. The major slogan of the Gezi rebellion is much more topical at present than it was during the days of the rebellion: Let Erdoğan resign! Let the government resign!

The ongoing political crisis is gradually begetting an economic crisis. The fragile nature of the Turkish economy, depending as it does heavily on inflows of hot money, is currently drifting the entire country towards the edge of a cliff. Different sectors of the Turkish bourgeoisie are complaining about the increase in interest rates and the appreciation of the US dollar and the euro vis-a-vis the Turkish lira. But come crisis, they will certainly unite again in order to make the workers pay for the crisis. Their first step will be to attack the workers’ right to severance pay. Defend the workers’ right to severance pay!  The bosses of MÜSİAD, TUSKON and TÜSİAD[2] are already making their preparations to carry out massive layoffs! Despite fighting each other, they retain their unity against the working class to a high degree, as exemplified by the recent draft bill making legal arrangements for “rental workers”!

Let the bosses pay for the crisis! Ban layoffs! Nationalize under workers’ control all companies that lay off workers! Any attack against the workers’ right to severance pay is a legitimate reason for the workers to declare a general strike! Say no to “manpower agencies”, which will turn workers into rental commodities!

Neither save the Erdoğan government through a hostage negotiation, nor support the pro-US opposition against the pro-US AKP government! We do not lack alternatives. Those who are for workers and the oppressed, unite!

The popular rebellion’s only real alternative to the ongoing crisis is to fight for a workers’ and laborers’ government!

[1] Yavuz was the Ottoman sultan who massacred legions of Alawis during his reign in the early sixteenth century. The AKP government has recently given his name to the third bridge on the Bosphorus, currently under construction.

[2] MÜSİAD: the Association of Independent Industrialists and Businessmen, supporting the AKP government; TUSKON: the Turkish Confederation of Businessmen and Industrialists, affiliated to Fethullah Gülen’s fraternity, which supported the AKP government for a long time, but has had frictions with it in recent years and been in an intense fight with it in recent weeks); TÜSİAD: the Association of Turkish Industrialists and Businessmen, the organization of the Westernist-secular wing of the bourgeoisie, dissatisfied with the AKP’s Islamist orientation.