For peace to the people of Ukraine, against capitulation to its enemies! 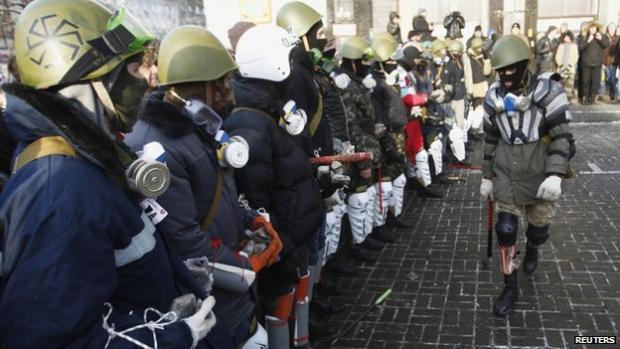 On June 7-8, 2014, an Anti-War Conference took place in Minsk, Belarus, bringing together left activists and representatives from Marxist organizations and groups from Belarus, Russia and Ukraine. As a result, a Resolution to “Stop the War in Ukraine” was issued and is circulating regionally and internationally.

First, it appears positive that in a climate of exacerbating nationalism, xenophobia and anti-Semitism following the dramatic events in Ukraine, participants to a Conference coming from countries immediately involved in the conflict meet to declare their opposition to war and national hatred

Undoubtedly, our urgent duty is to revive proletarian internationalism and the brotherhood of the peoples that initially was proclaimed by the Great October Socialist Revolution of 1917. The internationalist line that V. I. Lenin had clearly defined in his immortal text on the Georgian Question in the first Soviet period, against all forms of chauvinism, including Great Russian oppressive nationalism, is now of greater urgency than ever

Our parties, the EEK of Greece and the DIP of Turkey, and other participants to the 2nd Euro-Mediterranean Conference on “Europe in Crisis” (Athens March 31- April 1, 2014) have taken the initiative, from the beginning of the war in eastern Ukraine, by circulating internationally three Statements (on April 18, after the Geneva Agreement, on May 6, after the Odessa massacre of May 2, and before the fake “elections” of May 25),  to wage  an international campaign of solidarity with the victims of this war and against the  real war instigators  in the US, the EU, and NATO.  So, now, we express our appreciation of the Conference in Minsk and its anti-war Resolution.

We are sincerely and uncompromisingly for a common international struggle to stop immediately all the war operations launched by the real terrorists, the  Kiev ruling coalition of oligarchs and the  Nazi followers of Stepan Bandera, and to bring peace to the people of the Donbass region and of the entire Ukraine, Eastern and Western. But we cannot achieve these urgent, necessary, and honorable goals by following the general line and the demands put forth by the Minsk Statement.

From the beginning, the Statement speaks about a “military conflict that followed the victory of the neo-liberals and nationalists at Kiev ‘euromaidan’”. This characterization is wrong: to call the pro-imperialist oligarchs simply “neo-liberals” and the self-declared Nazis of the Praviy Sektor and the Banderaite Svoboda just “nationalists” is not only an understatement but an apology for them. It hides the real nature of the conflict. Without the use of the organized brutal force of fascist stormtroopers, the US and EU imperialists could not have hijacked the popular unrest in February and impose, with the help of the deputies of the oligarch Akhmetov,  their “regime change” in Kiev, with the previous anti-popular ruler, the corrupt oligarch Yanukovitch, running away...

The determining role of US and EU imperialism in the Ukrainian tragedy cannot be obscured or put on the same level with Kremlin’s power politics and it cannot be claimed that Russia is the primary and principal, if not the sole, force responsible. The Kremlin should be criticized but for other reasons: it combines nationalist rhetoric and support in words to the Russian speakers with subordination in deeds of the just popular struggle in Donbass to diplomatic bargaining with imperialism. To demand  as the Minks Statement calls for without any distinction “to completely stop interfering in Ukrainian conflict” is like a repetition of the “policy of non-intervention” followed by the British and French governments during the Spanish Civil War against fascism, while Hitler and Mussolini were busy arming Franco's fascists and bombarding Guernica.

Everybody knows the role of the US not only in the establishment of a  pro-imperialist regime in Ukraine, but also in the launching of the war against the  population in Eastern and Southern Ukraine protesting and rebelling against the new authoritarian supremacist rulers in Kiev. As we have already stressed in our Statement on April 18, 2014: “On the eve of the launching of the operations, the head of the CIA John Brennan traveled to Kiev obviously to supervise the campaign of military repression of the people, while the White House, in a Press Conference, publicly ‘urged the government of Ukraine to go forward’ to establish ‘law and order’.”

It  untrue that the “Russian government, the European Union and the United States use the civil war in Ukraine for the same purpose: dying Donbass people are just pawns in their competition.” The proud miners, industrial workers and other peaceful common people of the Donbass region, as the heroic example of Sloviansk shows, are not “just pawns”: they have risen and are fighting for their inalienable rights. They are not just objects of the Great Powers’ manipulation, but agents of workers-popular resistance. This is why despite the huge military aggression unleashed by air and land, with the use of war planes, helicopters, tanks, cannons of the “official” Ukrainian armed forces, by the Nazi storm troopers integrated into and disguised as the “National Guard”, and by the death squads of mercenaries of the oligarchs such as Kolomoiski and Akhmetov, the workers-popular rebellion has not been defeated. On the contrary, as an act of defiance and insubordination, the People's Republics of Donetsk and of Luhansk have been declared and the fake elections of May 25, held to legitimize the coup in Kiev, were effectively boycotted. Even the “mainstream” Western press (the Financial Times, the International Herald Tribune etc.) was obliged to  admit that without the support of the local population in Eastern-Southern Ukraine, the Donbass revolt could not have been sustainable.

Now, Poroshenko, and behind him the US, the EU, and NATO, want to achieve through “peace proposals” what they were not able to get through war. As a matter of fact, to reverse the famous statement by Clauzewitz, their “peace” is the continuation of war by other means.   From this standpoint, we find unacceptable the following demand in the Minsk Statement: “We urge all the parties of the conflict [...] to disband armed groups.” In real terms, this means disbanding the militias of the People's Republics of Donetsk and of Luhansk, a recipe for their defeat. To make a historical analogy, it is as if one were calling for the disarming of the armed people of the Paris Commune and leaving them to the mercy of the troops of Thiers.  This would not be the end of the civil war but the crashing of the popular resistance in Donbass by the revanchists and fascists as a precondition for imposing the misery demanded by the IMF in agreement with Kiev on the entire Ukrainian people in the Eastern and Western parts of the country.

We repeat as in our Call on April 18: “Neither the Kremlin nor the oligarchs, but the international working class is the real class ally of the Ukrainian workers.

Our destinies are interconnected and we have to take them into our hands. We have to fight together the same enemies: the US/NATO imperialism and its warmongers, the IMF, the EU, and their draconian plans, the oligarchs in all the post -soviet space served by Ukrainian or Great Russian nationalism, ethnic and religious hatred, the new rise of anti-Semitism and fascism”.

And as our May 13 Statement on Ukraine by Left parties and movements we consider it necessary “to dismiss immediately the Supreme Rada and replace it and other bourgeois authorities with new national authorities created at a national congress and consisting of Councils of workers and their executive committees at local, regional and national levels, including at all enterprises. Only then, on condition of the right of a recall of deputies by those who have elected them, will there be such conditions when workers and other laborers will be able to define democratically the destiny of the country.”

A hundred years after World War I, and as the anniversary of the Zimmerwald Conference is approaching , we urgently need another international Conference with the same spirit, against the war and the catastrophe threatening Ukraine, Russia, Europe and the entire world.

Peace to the people!  War against the war of imperialism!
All power to the Workers' Councils!
For a united, independent, socialist Ukraine in a united socialist Europe!