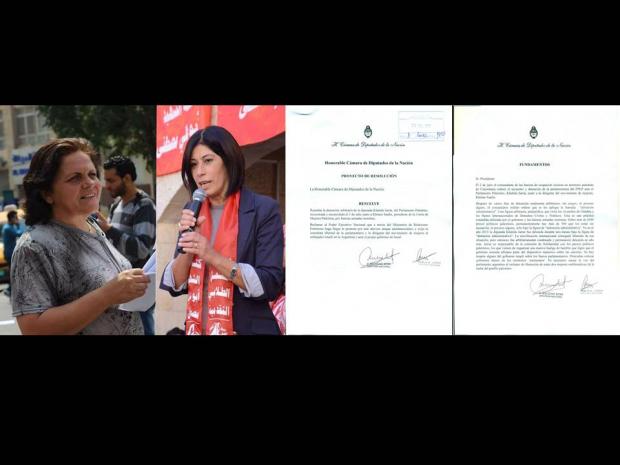 Argentine parliamentarians have submitted a motion to the country’s National Parliament, calling for the national executive and the Ministry of Foreign Affairs to protest the arrest and imprisonment of Palestinian political and women’s movement leaders Khalida Jarrar and Khitam Saafin by Israeli occupation forces and demand their immediate release.

It was submitted by V. Soledad Sosa and Pablo S. Lopez, members of the National Chamber of Deputies of Argentina with the Partido Obrero, the Argentinian section of the Coordination for the Refoundation of the Fourth International (CRFI). People, political parties and movements around the world have called for the freedom of Jarrar, Saafin and their fellow Palestinian prisoners.

Both were seized in the pre-dawn hours of 2 July and both have been ordered to imprisonment without charge or trial – Jarrar to six months and Saafin to three months. Both sentences are indefinitely renewable. The leftist parliamentarian and feminist leader join 500 Palestinians held without charge or trial under administrative detention and nearly 6,500 total Palestinian prisoners in Israeli jails.

An English translation follows and the Spanish original is below:

The Honorable National Chamber of Deputies

To reject the arbitrary detention of parliamentarian Khalida Jarrar of the Palestinian Parliament, abducted and imprisoned on 2 July together with Khitam Saafin, President of the Union of Palestinian Women’s Committees, by armed Zionist forces.

To call on the national executive power to act, through the Ministry of Foreign Relations, to protest this treacherous, anti-democratic attack and to demand the freedom of the parliamentarian and the leader of the women’s movement, directed to the Israeli ambassador to Argentina and to the Israeli government.

On 2 July, the commander of Zionist occupation forces in the occupied Palestinian territory of the West Bank ordered the abduction and arrest of the member of Palestinian parliament, Khalida Jarrar, as well as the leader of the women’s movement, Khitam Saafin.

After several days of arbitrary detention without charge or trial, they were ordered by the military commander to so-called “administrative detention.” This is an arbitrary, unlawful practice that violates the Geneva Conventions and the International Covenant on Civil and Political Rights. This practice is in widespread use by the Zionist government and armed forces. There are more than 6500 Palestinian political prisoners and more than 500 held without charge and without trial, only under the pretext of “administrative detention.”

Previously in the year 2015, the deputy Khalida Jarrar was detained and ordered to six months in “administrative detention.” While international mobilization was able to lift the order, she was then arbitrarily sentenced and imprisoned for over a year. Jarrar is responsible for the Prisoners’ Commission of the PLC that works for solidarity with the Palestinian political prisoners, those who have just organized a massive hunger strike for the Zionist government to loosen the repressive grip on the prisons. The Israeli government does not respect parliamentary privileges. They intend to install a puppet government in the “self-rule” territories. It is necessary to add the voice of the Argentine Parliament to demand the liberation of these two emblematic women figures of the Palestinian people’s struggle.