Partido Obrero (Argentina): Netanyahu, the murderer of the Middle East, get out! 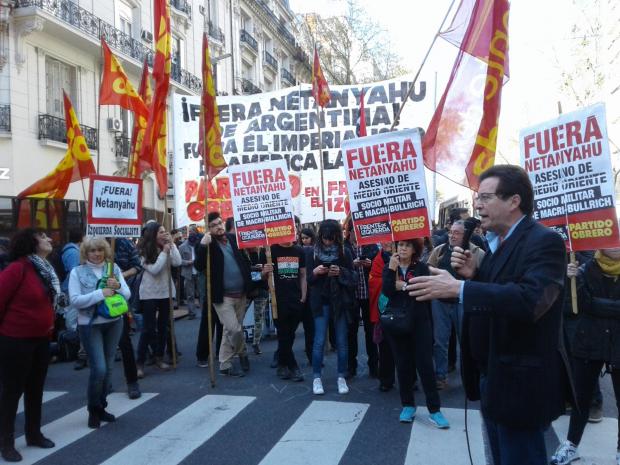 Netanyahu, the prime minister of the illegitimate occupier state of Israel, began his visit to Latin America at Buenos Aires. He will be the first Israeli prime minister to visit Argentina, before proceeding to Columbia and Mexico. Netanyahu’s program in Argentina includes meetings with Argentina’s president Mauricio Macri and Paraguay’s president Horacio Cartes, who flew in to visit Netanyahu in Argentina.

Partido Obrero (Workers’ Party - PO), the sister party of DIP in Argentina, says that the aim of Netanyahu’s visit is to develop a collaboration between illegitimate Israel and Argentina, on security and intelligence topics, as well as to buy arms and military technology from Israel. Already, the Zionist occupier plays an important role in training the local police organization and the security forces of Argentina. The Macri government wants to strengthen its pressure on Argentina’s working class, which is imposed in order to make the working class bow down to the austerity policies, with this collaboration.

Demonstration against the Bullrich-Macri-Netanyahu military alliance

The PO, declared in the call which was published in Prensa Obrero, that Netanyahu and the “state” he represents are war criminals and the murderers of Palestinians, and there are thousands of Palestinian captives held in the prisons of the occupier state. PO drew attention to the hypocrisy of Macri, who pretends to stand up for “human rights and democracy” in Venezuela, while at the same time hosting and honoring a war criminal in his country.

PO stated that a government which supports the oppression against other peoples, would use the same methods on its own people, and called to mind the forced disappearance of Santiago Maldonado, who was taken by security forces from a demonstration to support the Mapuche community. PO also called for a struggle against the military partnership between president Macri, Particia Bullrich - the minister of security and the agent of Zionists in Argentine’s government - and Netanyahu.

After the call of PO and other organizations of FIT (Front of the Left and Workers), residents of Buenos Aires protested against Netanyahu’s visit, which created a widespread reaction all over the country. This reaction was also embraced by some organizations of the Jewish population of Argentina. In the end, the Argentinian government was forced to take higher level of security measures. Notwithstanding this, hundreds of people marched from Plaza de Mayo to the Zionist embassy, where Macri and Netanyahu met, on 12th of September.

PO militants joined the demonstration with a banner that read “Netanyahu, get out of Argentina! Imperialists get out of Latin America!” and placards that read “Netanyahu, the murderer of the Middle East and military partner of Macri and Bullrich, get out!” Marcelo Ramal, our comrade from PO who made a speech in front of the Zionist embassy, declared that this is a partnership that strengthens the oppressive policies of the Macri government.

MP’s of the PO made two motions to the Argentinian parliament a short time ago, with the purpose of solidarity with Palestinian people, one of which aimed supporting the victorious hunger strike of Palestinian captives, while the other demanded the freedom of Halide Jerrar and Hitam Al-Saafin, leaders of the PFLP. PO, strictly rejects all economic and military relations with Zionist Israel and also refuses to take part in the occupation of Palestine. PO shows who the real friends of Palestine are, by struggling from miles away to free the Middle East from this reactionary, dangerous entity called Israel and working for the emancipation of Palestine.