In Paris, an act of international solidarity with Georges Abdallah 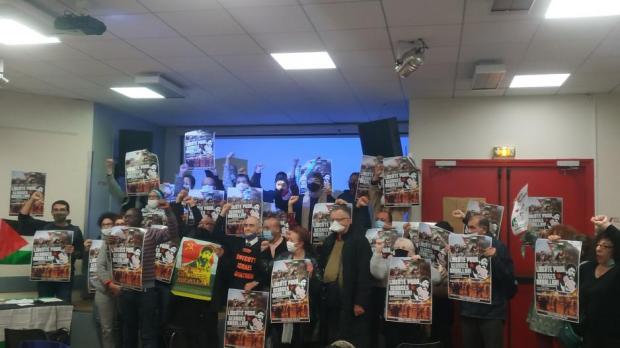 French imperialism has been holding captive Georges Ibrahim Abdallah, a Lebanese communist fighter of the Palestinian cause, for thirty-six years. An intensive campaign is being carried out in many countries to liberate comrade Abdallah from his captivity at the hands of French imperialism. As a part of these activities, the United Campaign for the Freedom of Georges Abdallah held an event on the evening of October 14 in the CICP hall in Paris. Various organizations from six countries took the floor at the event attended by approximately fifty people.

The event started with the presentation of the documentary "Fedayin," which is to be released soon, about the life and captivity of Georges Abdallah. Subsequently, a comrade read a statement on behalf of the United Campaign. The statement emphasized that the demand for Georges Abdallah's freedom has been building more and more of a support base both in France and in Lebanon. It pointed out that the demonstrations in front of the Lannemezan prison, where Abdallah is incarcerated, have entered their tenth year, and the rally to be held on October 24 this year has gained particular importance.

The Popular Front for the Liberation of Palestine (PFLP) greeted both Georges Abdallah and those fighting for comrade Abdallah's freedom in France with the video they sent. The speech affirmed the importance of the struggle of Palestinian prisoners, who continue to resist in the prisons of Zionism, especially that of Ahmad Saadat. Samidoun (Solidarity Network with Palestinian Prisoners) also participated in the event with a video sent by a representative in Canada. Stating that Palestinian prisoners embraced Abdallah as one of their own, the speaker said that the name Georges Abdallah came to be an epitome of the struggle against imperialism, Zionism, and reactionary Arab regimes.

The Communist Party of Lebanon and Palestine Vaincra (Palestine Shall Win) collective militating in the city of Toulouse stated the importance of Georges Abdallah as an international symbol in the videos they sent. The representative of the UJFP (French Jewish Union for Peace), an anti-Zionist Jewish organization, took the floor and stressed that they stand by both the struggle for the freedom of Abdallah and the Palestinian cause, and drew attention to the hypocrisy of the French state. The representative of the Italian organization Rete dei Comunisti (Network of Communists) expressed the importance of Georges Abdallah's not giving up the cause he defended despite 36 years of imprisonment.

The "Friends of Palestine against Imperialism and Zionism" from Turkey sent a video shown to the participants with French subtitles. Our comrade underlined that both the imperialists and the Zionists are afraid of Georges Abdallah and rightfully so. Abdallah is the representative, he asserted, of a revolutionary socialist solution for Palestine. He stated that when the imperialists look at Georges Abdallah, they see that the crimes they committed in the Middle East do not go unpunished. In ending his speech, he said, "Georges Abdallah's struggle is our struggle, his enemies are our enemies," to loud applause.

Another comrade of ours, speaking on behalf of the Revolutionary Workers' Party (DİP) of Turkey, stated that fighting against imperialism and Zionism by any means necessary is not a crime but an honor. Expressing our determination to liberate comrade Abdallah from his captivity at the hands of French imperialism, our comrade emphasized that this would be a victory against both the US and French imperialisms and Zionism.

After the speeches, the event came to an end with slogans chanted in support of Georges Abdallah and with the singing of the Internationale in unison, in Arabic, French, and Turkish.