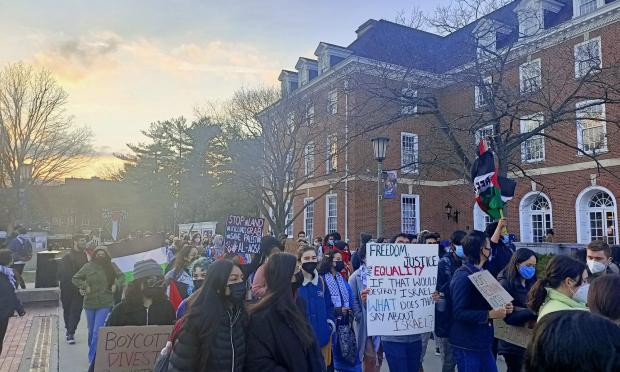 The continuing murder of Palestinians by the Zionist forces in Jerusalem at the Al Aqsa Mosque complex during the month of Ramadan has created rage around the world. One of our correspondents in America has sent us this report on an action organised by the students of the University of Illinois at Urbana-Champaign.

Last month, Students for Justice in Palestine (SJP) at UIUC started a divestment campaign for the corporations that are complicit in human rights violations and that contribute to the Israeli military, US prisons and US immigration and Customs Enforcement (ICE). The divestment campaign asked to divest from companies such as Caterpillar Inc., Elbit systems, Lockheed Martin, Northrop Grumman and Aramark, which directly contribute to the occupation of Palestinian lands, criminalization of immigrants and people of color, and illegal labor in US prisons.

After weeks of diligent campaigning, planning, and outreach, SJP UIUC presented its Divest resolution to the Illinois Student Government (ISG) on February 16th in order to place its referendum question on the student ballot for the upcoming election, at which the students at UIUC would be asked to vote to divest from these companies. However, Zionist senators tried all kinds of low roads to obscure the resolution from passing and not show up as a referendum question for UIUC students. As a first calculated plan, five Zionist senators walked out during the middle of the voting section and caused the meeting to be adjourned. As such, next week on February 23th SJP was again forced to present the resolution to ISG. This time the resolution passed with a simple majority of 17 to 14. However, as a second insidious plan, Zionist senators this time requested a secret ballot during the meeting, in order to “protect” their senators and identity. The secret ballot request was voted and accepted but unbeknownst to SJP, it was later weaponized against SJP with claims that it violated the ISG constitution.

As a last resort, Zionist senators filed a judicial complaint against SJP’s divestment resolution, including a complaint against the meeting agenda being sent out “late”, or less than 48 hours beforehand. However, ISG later confirmed that the agenda had been sent out late on multiple occasions before, and yet the judicial committee upheld the unmerited claims of Zionist senators. As a result, the resolution could not be accepted by the Campus Student Elections Committee within an appropriate deadline.

These pre-meditated attacks have clearly shown how far Zionists, as they call themselves “only democracy in the middle east”, can go to exploit the flaws of democratic institutions in order to advance their anti-Palestinian, settler-colonial ideologies as well as showing the corruption of democratic institutions such as ISG, who blatantly shut its eyes to the silencing of Palestinian voices.