"Palestine is simmering! Workers' movement and socialists! Forward for solidarity with the Palestinian people!" 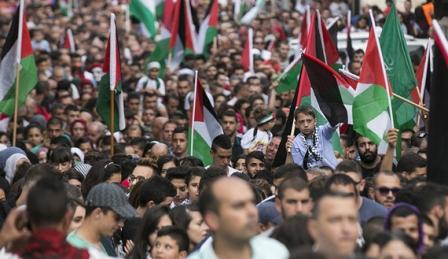 Resolution of the 6th Congress of the Revolutionary Workers Party (DIP) of Turkey in solidarity with the Palestinian people against imperialism and Zionism:

The 6th Congress of the Revolutionary Workers Party (DIP) of Turkey greets the century-old, just and legitimate fight of the Palestinian people against Zionism and imperialism, and states that the party's support for this struggle will continue uninterruptedly.

Throughout the entire history of its struggle, the Palestinian people have fought against almost all great powers, so to speak. Palestine, which fed the Ottoman court, pashas, ​​tax farmers and their local collaborators until the 20th century, was occupied by the imperialists after the First World War, and its territory was made a present to the Zionists by them. In 1948, the direct colonialism of imperialism was replaced by the Zionist occupation, and a racist, fundamentalist, apartheid-type settler-colonial state called Israel subjected the Palestinians to a systematic ethnic cleansing on the one hand, and, on the other, became the bridgehead of the imperialists, especially of the USA, in the region.

While the Palestinian people embarked on a great struggle against imperialism and Zionism since the 1930s, they also dealt with the vacillations and betrayals of the reactionary Arab regimes that they thought would stand by them, and were stabbed, so to speak, in the back by them. Worse still are the policies of the Palestinian bourgeoisie that have taken the form of complete surrender since the Oslo talks. This leadership, having taking control of the Palestine Liberation Organization, promises nothing but more humiliation to the Palestinian people today. Most recently, the vicious murder of the Palestinian politician Nizar Banat has clearly shown how far the betrayal of this leadership to its own people can go if its corrupt order, supported financially by the imperialists, is threatened.

Hamas, currently fighting against Zionism, will not be able to carry the struggle of the Palestinian people to the end as long as it does not break its ties with the tyrannical regime of Erdogan, increasingly competing with others to serve imperialism in the region, and Qatar, and as long as it clings to the bourgeois class in the manner of Mahmoud Abbas. The only program that will liberate the Palestinians from imperialism and Zionism, as well as the collaborators and the exploitation of their own bosses, is Marxism. In this sense, Palestinian socialists have a great burden on their shoulders.

The Palestinian people have used different means over the years to fight all these enemies. In addition to armed struggle, always a legitimate tool against the Zionist invader, recently the Boycott, Divestment and Sanctions (BDS) Movement, which successfully organized international solidarity in the fight against the Apartheid regime in South Africa, is also gaining important positions. Today, Palestinian youth, especially in the diaspora, are raising a new struggle against the so-called "Palestinian Authority”, which is in collaboration with imperialism and Zionism, and discussing its means and content. As the demonstrations in the days following the murder of Nizar Banat have shown, a part of the West Bank community is breaking away from the leadership of Mahmoud Abbas, although it has not yet reached a mass-scale movement. And as the events after the Al Quds/Jerusalem war that broke out in May showed, the Arabs living within the borders of Zionist Israel are for the first time being this radicalized, posing a civil war threat. Organizations such as the PFLP are unfurling the flag of rebellion against the Abbas leadership for the first time in many years. Palestine is simmering.

On the other hand, in contrast with the 12 years of Netanyahu governments and especially with the end of the era of Trump who provided full support to Zionism, Israel seems to have entered a very different political period today. The coalition government formed by 8 parties, representing very different political tendencies from the extreme right to the center left (and including an Arab party for the first time), in order to overthrow Netanyahu, will come out bruised after each crisis in the future. Moreover, Netanyahu will often try to engineer crises in order to return to power. Mahmoud Abbas has reached out to this government also, but Hamas and possibly Hezbollah will want to exploit the weaknesses of this coalition. In short, Israel is no longer governed by a monolithic political will as it was a few years ago. While the Palestinian people are in a quest with their various components (diaspora, Gaza, West Bank, ’48 Arabs), Zionism's showing such signs of weakness suggests that we are moving towards an important turning point.

The 6th Congress of the Revolutionary Workers Party (DİP) once again embraces the honorable struggle that the Palestinian people are waging by any means necessary against imperialism, Zionism and its collaborators.. It affirms that the struggle against the tyrannical regime of Erdogan, seemingly friendly to the Palestinian people, but maintaining relations with Zionism, especially in trade, and preparing for further cooperation, will also contribute to the struggle against Zionism.

The 6th Congress of the Revolutionary Workers Party (DİP) sees Turkey's severing of all relations with Zionist Israel, its exit from NATO, the closure of the Kürecik Base, a shield protecting Zionism, the closure of the İncirlik Air Base which is spewing blood in the Middle East, and the closure of all other imperialist bases that are operating in Turkey, as the concrete headings of the unbreakable ties between the freedom struggle of our working masses and the Palestinian cause. With this understanding, the Revolutionary Workers Party (DİP) assigns its relevant bodies the duty of supporting the work of the Friends of Palestine Against Imperialism and Zionism Movement, established with the initiative of the party, and spreading its efforts in this direction among the working masses, in particular the proletariat.