Overrunning the barricades in India: first COVID, now the police and next revisionism! 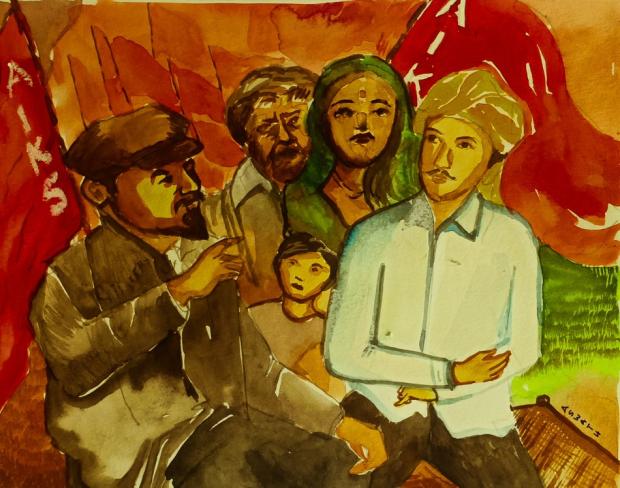 India and its fascist government are having a particularly tough time dealing with the COVID pandemic. The pro-capital and anti-science stance of Modi led to an uncontrollable situation just like the governments of his brethren in Brazil and the US. In fact, India has just surpassed Brazil in the number of cases per day. One might hope that this disaster, together with the Third Great Depression whose effects are still being felt and the long-running issues of workers and peasants in the country would finally create big cracks in bourgeois hegemony and perhaps lead to a revolutionary situation. Yet the reality is a lot bleaker as when a direct political challenge to the bourgeois order is not present, the bourgeoisie becomes even more brazen in their attempts to override the hard-won rights of toilers and discipline the workforce evermore; not despite the pandemic and the political turmoil but by exploiting them. In other words, with the power of BJP “intellectuals” poisoning the masses with nationalist irredentism on one hand, and the RSS goons (BJP affiliated paramilitary forces) crushing dissent and oppressing minorities on the other, the bourgeoisie would not let this disaster go to waste!

This is the background of the decision by BJP to propose new bills to undermine workers rights and job security, to disinvest from large government-owned enterprises as well as to remove the protections of peasants in their dealings with merchants and agricultural-capital, in particular undermining the minimum support prices (MSP) which guarantee a minimum price for the agricultural produce to be bought by the state. Despite winning the latest elections with a clear majority, BJP has been troubled with mass protests, with the latest case being the widespread protests against the Citizenship Amendment Act, which gave citizenship to refugees who spent a long enough time in India, as long as they were not Muslims! Yet the COVID pandemic accomplished what RSS goons could not, and the protests died out quickly after March. This is why BJP thought this would be the perfect time to pass these anti-labor and anti-farmer acts, which would normally be expected to spark immense protests in a country where the already long-running peasant problems led to a peak in farmer suicides during the pandemic.

This proved to be a grave miscalculation, as the call for a one-day general strike issued by all unions except the BJP aligned BMS met with the great enthusiasm of the masses, and a supporting demonstration by millions of farmers, leading to participation that is estimated to be anywhere between 25 to 250 million! Entire states of Kerala, Puducherry, Odisha, Assam, and Telangana were shut down with participation in banks, financial services, various government services, transport, steel units, port and docks, telecommunication services, plantations, power generating units, coal and other mines, oil and natural gas production units, and millions of other miscellaneous industries, as well as a major disturbance in other states. The 12 point charter listing the demands of the protesters include withdrawal of the aforementioned anti-labor and anti-farmer laws, as well as additional COVID relief.

While the workers struck work, the farmers from many states marched to Delhi as part of their demonstration. On the borders of the city, they met the police barricades. Peasants form a large part of the base of BJP, we do not know if the farmers expected some sympathy for this reason, but they certainly got the same heavy-handed treatment as other protesters before them. While clashes were going on between the demonstrators and the police, Modi was declaring the strikers and demonstrators to be “anti-Indian”, even going so far as to allege that the movement is a conspiracy of the Sikh separatists from Punjab. Yet here too, the people did not yield, even after the concession of the authorities for a demonstration in a remote region of Delhi.

Unlike the workers’ strike, farmers' struggle continues beyond the one-day show of force. This is not an exception in the history of peasant struggles in India, where the unification of farmlands through capitalist processes has been fiercely resisted since independence. What eluded the founding Nehru government with all the prestige and momentum behind it, was certainly too much for the subsequent governments built on much shakier grounds. Today BJP thinks it can succeed where others failed, at a time when the corporations have undoubtedly tightened the pressure valves after the economic crisis, taking advantage of the unique COVID situation. The bills that they passed in September are designed to spearhead the assault by removing regional market restrictions, allow the hoarding of agricultural produce, and to enable private contracts between farmers and agricultural firms without the restrictions of the MSP regime, all of which work to ease the domination of the market by large agricultural corporations and to undermine the MSP system. The farmers recognize the attempt for what it is and refuse to leave Delhi borders until these bills are annulled.

Therefore we have in our hands a mass movement that overcomes the pandemic conditions and the BJP brutality, in order to address issues with clear class characteristics. We also have self-declared communist parties organized inside the masses with a history of organizing as old as any party in the country. So the obvious question lingers: why is the pulse of the revolution nowhere to be heard? How can it be that these demonstrations and strikes happen year after year, some by students, others by workers and peasants,  each of which is claimed to break a new record in participation, and then life just goes back to “normal”? The painting by Aswath titled “Lenin in India” should not necessarily be taken as a misguided portrayal of CPI(M) politics as Leninist since it may also be the portrayal of a yearning for Leninism. Perhaps the artist felt, if not outright understood, what was lacking, and what he couldn’t add to the picture of Indian politics himself, he decided to add in his painting.