Open Letter: Reject the Zaev-Tsipras agreement imposed by NATO and the EU! For a Socialist Federation of Free Balkan Peoples! 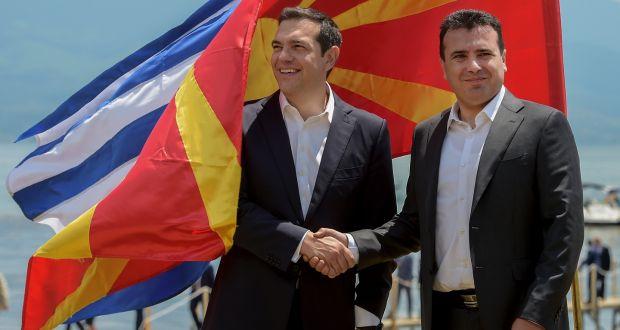 The agreement between the leaders of the Republic of Macedonia and of Greece, Zaev and Tsipras, received the support of 41 intellectuals from around the world as well as from Greece and Macedonia, who published a petition they signed in the British newspaper The Guardian on 20 July 2018 (https://www.theguardian.com/global/2018/jul/20/historic-deal-on-shared-macedonian-identity-must-be-honoured?CMP=share_btn_fb). This petition, which is supposed to be written from a left-wing point of view condones the role imperialism has played in all this. A petition that was written as a rebuttal of the first also sidesteps the issue of imperialism and the role it plays in the Balkans. This second petition was also signed by an international set of intellectuals, including certain from Macedonia and Greece. At the time of publishing this, we are not aware whether it has been published yet.

We are publishing an Open Letter by two intellectuals from the region, who are also the leaders of two revolutionary Marxist parties in their respective countries, the EEK of Greece and the DIP of Turkey.

The willing collaboration of the Greek government with NATO’s initiative, supported by the EU, for an arrangement between Athens and Skopje on the 27 year-old dispute on the name of the Republic of Macedonia, to end the Greek veto and allow this tiny Balkan country to join these two imperialist alliances, led to the Zaev-Tsipras agreement of June 17, 2018.

41 intellectuals from different countries have signed a petition that blindly supports this agreement, including “crucially”, in the terms used by the signatories, supporting Macedonia’s accession to the EU, whose role in Greece should have been a warning, and, even more ominously, to NATO, a sign of the capitulation of large sectors of the Western left to imperialism since the fall of the Berlin Wall, the collapse and disintegration of the USSR, and the elemental process of the restoration of capitalism in China. A petition written in response, on the other hand, limits itself coyly to saying “we scholars should be honest and speak out that NATO (and even EU) membership is unlikely to bring any social and economic progress to the small and poor Macedonian state”, thus limiting their criticism of the imperialistic EU and the war machine of imperialism that NATO is to probabilistic calculations!

The Zaev-Tsipras agreement, promoted by the US, NATO and the EU, already has put once again the powder keg of Greek and other Balkan nationalisms on fire, exploited by fascists, the Right, the military and the Church. The anti-imperialist and anti-capitalist forces, without stopping fighting these reactionary forces, without any concession to nationalism, with a right wing or “left” cover, have to reject the Euro-NATO Zaev-Tsipras agreement.

It cannot bring peace but war. NATO, the aggressor that destroyed by a barbaric war of aggression Yugoslavia to be replaced by an archipelago of impotent protectorates, including the Former Yugoslav Republic of Macedonia, cannot bring but new disasters. Its pressure to solve the so-called “name dispute” was driven by its need to establish a military base in Macedonia to complete the encirclement of Russia. With Macedonia joining NATO the Vardar River valley can be used to transfer, easily and rapidly, troops from the Piraeus harbor to the interior of the Balkans.

It cannot bring fraternity among the peoples but fratricidal conflict and nationalist frenzy-as already we can see by the chauvinistic mobilizations led by the most counter-revolutionary forces.

It cannot bring freedom to the people but rule by the enemies of freedom and fascists.

Against the entry of the Republic of Macedonia to NATO and the EU,we defend the freedom and the right of national self-determination of the Macedonian people to name its country as it chooses. No other nation or State, including Greece has any right to impose its name to another nation.

We defend freedom and equality to all Balkan peoples, to all oppressed ethnic and religious minorities in the Peninsula, including to the Macedonian ethnic minority in Greece.

We have to make ours again the slogan of the anti-fascist socialist revolution in Yugoslavia, Albania, and Greece during the Nazi occupation of the Balkans: Death to fascism! Freedom to the people!

And furthermore, our watchword should be, against the Great Powers’ domination and against the local chauvinistic ruling classes, for a Socialist Federation of the free Balkan peoples!