One hundred years on, the Great October Revolution is alive and calls for a revolutionary proletarian international!

by The 4rd Euro-Mediterranean Conference
June 23, 2017 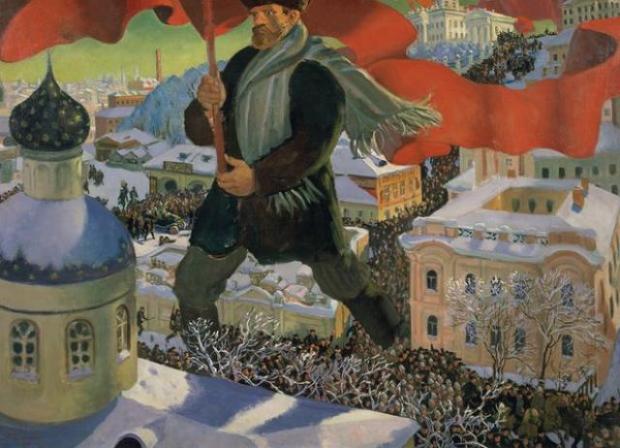 This year being the centenary of the Great October Revolution, the 4th Emergency Euro-Mediterranean Conference, held in Athens on 26-28 May 2017, adopted a declaration on this so far the most significant socialist revolution in world history, assessing its meaning for the 20th century and for the future and affirming its actuality.

The 4th Euro-Mediterranean Emergency Conference has conducted its deliberations on the Centenary of the Great October Revolution. The Conference wholeheartedly and unwaveringly declares its conviction that the October Revolution is the most important emancipatory event of the modern era and summons the forces of the working class and all progressive movements to follow in its footsteps and to bring to completion its unfinished mission.

The modern epoch, starting from the first Industrial Revolution of the 18th century, brought humanity an immense leap in the spheres of science, technology and the productive forces. Ironically, the very socio-economic system that made this leap possible, the capitalist mode of production, also made exploitation, unemployment, economic insecurity, poverty in the midst of plenty, and war of unprecedented dimensions and cruelty inescapable facts of life. By putting an end to capitalist private property and showing in practice that a different economic and social order based on common property in the means of production and distribution and conscious planning of production, the October Revolution showed, for the first time in a durable manner, that humanity would be able to put the advances in the productive forces to use without the attendant scourges characteristic of capitalism. Whatever criticism may be levelled at Soviet society and those that followed later in its footsteps, nothing can obliterate the fact that the combination of modern productive forces and common property in the means of production can provide the economic basis for a society that shares and cares for its members, without leaving any in fear for their future. This is a feat that no capitalist country, not even the most advanced and powerful, has been able to achieve on a durable basis.

The October Revolution is not solely a Russian revolution. It is the first revolution through which the only modern social force, the international proletariat, itself a specific product of capitalism, rose to power, albeit at first in a single country. It is from this first great leap forward that the other socialist revolutions of the 20th century, from the Chinese and Vietnamese to the Yugoslav and the Cuban, drew their inspiration and lessons. It is thanks to the support received from this revolution and the Soviet state, its most important product, that the colonial and semi-colonial peoples around the world rose and thus emancipated themselves from abject poverty and national oppression. It is under the whip of the threat of socialism, especially after the extension of the socialist revolution to other countries, that the bourgeoisie of imperialist countries and even of some dependent ones, gave in to the struggles and demands of their working masses, creating thus the highly ideological concept of the “welfare state”, which they hurried to dismantle as soon as the workers’ states started to collapse after 1989. In short, the October Revolution, which brought the proletariat into power for the first time, was in effect the trendsetter of the 20th century all around the world. In this sense and in the historic sense that it still shows us the future, the Great October Revolution and its sequel, the other socialist revolutions of the 20th century, as well as Marxism, the guide to these revolutions, are as much French and Italian and British as they are Russian, as much Balkan or Middle Eastern as they are Chinese or Vietnamese, as much African and surely Latin American as they are Cuban.

The Conference also expresses its conviction that the collapse of the workers’ states that were born in the 20th century is by no means a defeat and bankruptcy for the Marxist idea and programme of socialism, but the product of concrete circumstances that led, first, the Soviet state and, later, those that were born in its footsteps down paths that represented the abandonment of the genuine, revolutionary Marxist programme of proletarian democracy and internationalism. It was not the Marxist programme that failed but an aberration that pretended to be Marxist whereas it was only a caricature of it. The celebration with which the international bourgeoisie greeted the collapse of the workers’ states, producing intellectual stupidities of the type “the End of History” was consigned to the dustbin of history as rapidly as it was greeted. Capitalism has once again brought humanity to the threshold of barbarism in the form of an immense economic crisis, war, and an impending environmental catastrophe. Socialism is once again called to save humanity!

When Lenin arrived from his Swiss exile at the Finland Station in Petrograd, he finished his address to an excited crowd of workers gathered in front of the station by calling for the “World Socialist Revolution”. When approximately one month later Trotsky arrived in Russia from his exile in the United States, the day after his arrival he was invited to speak to the Petrograd Soviet in his former capacity of the President of the same soviet in 1905 and, unaware of what Lenin had said a month before, he closed his address by calling for the “World Socialist Revolution”! This is what the Bolshevik leadership was fighting for in the run up to the October revolution and after. It was for this reason that they formed the Communist International in the difficult days of the Civil War. This is what we should be striving for today: an international organisation that will bring together the revolutionary parties that are fighting for workers’ power in each and every country of the world.

The Communist International was not built overnight: it was the result of the groundwork that started during World War I in the form of the Zimmerwald and Kienthal Conferences. On this Centenary of the Great October Revolution, let us create our own Zimmerwald. Let us turn the Centenary Conference to be convened by our Russian comrades on the exact hundredth anniversary of the revolution, on 5-7 November 2017, in the very city where the Russian working class took power a century ago into our own special kind of Zimmerwald! Let us march together to stop an end to this drift into barbarism imposed by a capitalism in decline and build a world party that will unwaveringly strive for workers’ power all around the planet!