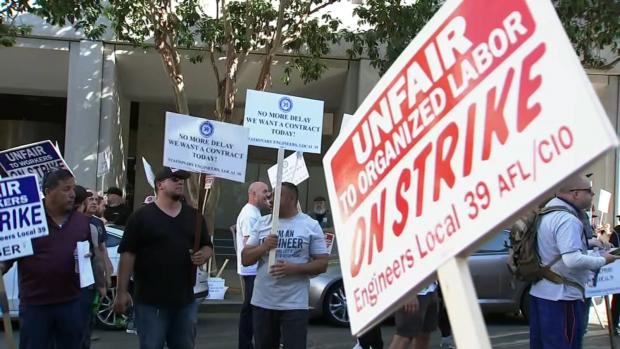 October 2021 witnessed a huge upsurge in strikes across a myriad of sectors in the USA, from auto workers of John Deere to food-processing workers of Nabisco. This unique month of strikes has already been dubbed “Strike-tober” by many American workers and socialists, and its impacts have already spilled over to the months that followed.

However, a long, relatively smaller strike had begun in mid-September, and unfortunately did not get the coverage it deserved from the mainstream media or most of the socialist press. The engineers of the private hospital chain Kaiser Permanente in Oakland, California have been striking for better pensions and wage increases adjusted to inflation. At the time of writing (December 10, 2021), the strike has entered its 84th day, thus becoming the longest strike the Bay Area has ever seen. It is seconded only by the 1934 San Francisco General Strike, which had lasted for 83 days.

American healthcare system has always been significantly less comprehensive and more privately managed than its counterparts in other advanced capitalist economies. However, the situation has been even more exacerbated in the last four decades by the neoliberal-capitalist looting of public resources. In the absence of any comprehensive public health service or infrastructure, private healthcare provisions have become a very lucrative business, with hospital chains growing in tandem with insurance companies and medical corporations.

The American Marxist researcher Mike Davis had long ago pointed out that private healthcare industry had become “the largest industry in the American economy” (Prisoners of the American Dream, p. 221) in the wake of the so-called “Reagan Revolution”. Today, even the little amount of publicly-owned hospitals are run as private/public joint ventures, integrated into a system that renders them “indebted” to the counties they operate in, and force them to downsize and cut back from their necessary spending. As a result, American healthcare provisions are of abysmal quality.

This has led to numerous upsurges and militant actions on healthcare workers’ part where they have strong unions. In California, nurses’ strikes and rallies (in tandem with other public employees) forced the arch-neoliberal governor and former movie star Arnold Schwarzenegger to have a change of heart and run on a public spending-  and environmental regulation-based platform in the mid-2000s. Over time, the nurses and other healthcare workers have developed militant traditions, albeit muddled with bureaucratic, pro-business leadership.

The current pandemic brought things to a boiling point. Short-staffed, ill-equipped, and utterly unprepared, the American healthcare system was catapulted to the brink of collapse. As early as March 2020, nurses lacking protective equipment were posting selfies with trash bags on, and the hospitals were retaliating against this exposure. Meanwhile, downsizing and under-staffing held sway amidst the pandemic. During the summer of 2020, the University of California system threatened to lay off hundreds of healthcare employees. A county-wide lay-off attempt in the Alameda County hospital system triggered a week-long strike in October 2020. While demonstrating remarkable organization and militancy, the strike ended without any significant gains under the bureaucratized and non-transparent union leadership.

Less than a year later, and on a smaller scale, the engineers of the Kaiser Permanente chain have picked up the fight from where it was left off.

About 700 hospital engineers went on strike to demand a 4% wage increase and better pensions than what Kaiser is willing to offer in mid-September. One of the biggest healthcare businesses of California, Kaiser is also notorious for its brutality against its workers. It has profiteered off the pandemic quite a bit: its own report of 2020 net income is $6.4 billion. Nonetheless, the management insists that they lack the resources for a mere 4% wage increase.

In the context of current economic over-heating, a 4% increase is but a modest demand. The combined impact of already sky-high sheltering costs (rent, bills, etc.) and the recent return of inflation into the American economy (latest figure 6.8 per cent) renders places like the Bay Area uninhabitable to the working class. Already under sway before the pandemic, the problem of gentrification has come back with a vengeance as the State of California relaxed the shelter-in-place orders and rent freezes. Against this backdrop, the engineers on strike insist that their demand of increase amounts to no more than keeping up with the rising costs of living.

The management is adamant in pushing pack against the demands, however. Fearing that the engineers’ victory might rekindle the workers’ hopes dashed by the union bureaucrats’ concessions to the hospital managements in late 2020, the Kaiser Permanente administration is determined to hold its ground. To that end, they have brought in scabs (strike-breakers in the jargon of the US working class) to do the work of the striking engineers. However, the scabs have proved incompetent to do the work of the engineers, which requires not only skill but also long experience at the workplace. Having done the bare minimum, they have left the remainder to other workers still on the job. This has led to tragi-comic results, such as one nurse having to stick together a broken serum stand with band-aid and other medical material.

As strikes have picked up in the last three months, this kind of scab-inflicted havoc also became commonplace. From the John Deere auto plant to the Kellogg’s cereal factory, reports of scabs causing more harm to the company than compensating for the time lost to the strike reached the mainstream via social media. However, in a sector as vital as healthcare even in normal times, let alone in the midst of a deadly pandemic, the bourgeoisie’s irresponsible greed proves even more fatal to the society. As the hospital upkeep progressively declines, risks to both other workers and the patients rise. By allowing this to happen, Kaiser is putting everyone in grave danger, once again proving that the fight against Covid-19 cannot be separated from the fight against capitalism.

Despite their heroic resistance and record-breaking endurance, the striking engineers are left to their own resources and are forced to fight a steep-uphill battle. With a mere 700 workforce, the engineers constitute one of the smallest sections of Kaiser Permanente employees. The majority of the workforce – nurses, mental health workers, and so forth – keep working inside the hospital buildings. In mid-November, a month into the strike, the SEIU (nurses’ union) rank-and-file authorized a sympathy strike with the overwhelming majority of 97%. While symbolically uplifting, however, this single-day sympathy strike did not put much economic or social pressure on the Kaiser administration.

When asked about the reason for the lack of solidarity actions on their co-workers’ part, the engineers identify the bureaucratic nature of the unions of these co-workers. Even for a one-day strike, the nurses and other workers have to put a 10-day notice, which means a further prolonging of the engineers’ strike. Besides, having proven its readiness to strike deals with the management behind its workers’ backs in late 2020, the SEIU leadership most likely is actively discouraging the nurses from engaging in further militant action.

For their part, the workers on the picket line think that Kaiser wants to make an example out of their struggle for other workers. The longer the strike endures, the scarcer its resources will get, and the more difficult it will get to maintain the well-being of the workers. Should the picket line be broken, it would send a stark signal to other workers: we will starve you if you complain. Then Kaiser Permanente can begin going down the ladder to break the union power of all other employees one by one. Therefore, the fate of the engineers on strike and that of all other hospital workers are intimately tied to each other.

The engineers’ dedication to their cause is commendable, but one does not win by dedication alone. Intra-class solidarity is once again an absolute necessity for not only the engineers’ victory, but also the well-being of all Kaiser employees.

[1]A clarification of terminology: in the US in this context, the word “engineer” does not mean workers with an engineering degree from a college. Rather, this term covers all the technical workers, from operating the machines to running the ventilation system in most workplaces (hotels, skyscrapers, etc.).