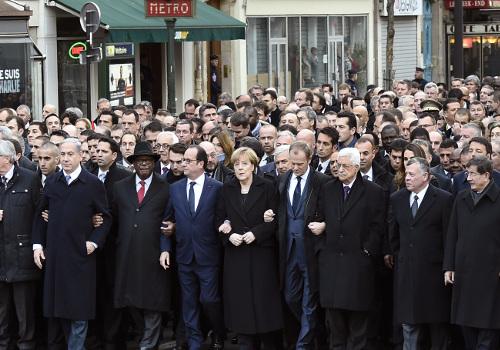 In politics there is a golden rule: beware agreements that cut across all political currents! The tragedy of Charlie Hebdo has been turned into a farce by the mammoth march in Paris, along with similar ones in cities across France, large and small. It is an insult on human intelligence to tie, in whatever combination, the names of Wolinski, Charb, Cabu and company with people of the ilk of the Camerons, Merkels, Rajoys, Renzis and Junckers of the world!

Here is a march that is dedicated to the freedom of expression. And on the first row of the heads of state and government is, lo and behold, Ahmet Davutoglu, successor in the office of prime minister of Turkey to Tayyip Erdogan, newly elected president of the republic, who, in his twelve years as head of government, has ridden roughshod over the freedom of expression in his country! Davutoglu also has another distinction, that of having acted, as foreign minister before becoming prime minister, as aide-de-camp to Tayyip Erdogan in the latter's quest of bringing down Beshar Assad of Syria through the good offices of all manner of Islamic fundamentalists. And lately, the Turkish government not only stood aside gleefully watching the Islamic State of Iraq and the Levant (ISIL) try to bulldoze Kobanê, one of the newly autonomous cantons of the Kurds of Syria, rubbing its hands in anticipation of the collapse of this newly-won autonomy, but has also been supporting this organization in underhanded fashion, as much evidence shows. Now it is this self-same ISIL to which belonged Amedy Coulibaly, the gunman who took the shoppers in a Parisian kosher grocery hostage, only to be killed in the final shootout. Davutoglu rubs shoulders on the streets of Paris with “world leaders from 50 countries” and tweets, in French for good measure, asserting he is “in Paris in unity with the French people against terrorism.” What shameless hypocrisy! International readers would certainly not be aware of this, but the people of Turkey know very well that this very same Davutoglu has refused, again and again, to call the ISIL a “terrorist organization”!

And the list of enormities is long! Just turn your gaze a bit more to the left in the family picture of “world leaders” on the march and your eyes will meet Benjamin Netanyahu, who dared to compare attacks from Gaza into Israel with the Charlie Hebdo massacre in Paris, forgetting the utter terrorism displayed by the Israeli army in its forays into Gaza at the end of 2008 and again in 2014, as well as its destruction of large swathes of Lebanese territory during the 2006 invasion of that country, keeping our sample restricted to only the latest instances of Israeli cruelty against Arab populations. After Davutoglu, the ally of terrorists, Netanyahu the leader of a terrorist state!

And just look at how the Arab world is represented: the prominent names are King Abdallah of Jordan, arguably a 51st state of the USA in the Middle East, and Mahmoud Abbas, the successor to Yasser Arafat who has shamefully thrown in his lot with U.S. imperialism and prays every night before he goes to sleep that America will rein in Israel's aggressive stance, but comes to Paris to rub shoulders with Netanyahu, whom he is unable to bring to the table for a serious negotiation. And look at how Africa is represented: Ibrahim Boubacar Keita, the president of Mali arm in arm with François Hollande, the president of the ex-colonial power, which also happens to have taken military control of Mali for the last one and a half years behind the excuse of ridding the country of Al Qaeda forces. What other African leader would be so willing to polish apples on the streets of Paris?

Then there are those who claim the mantle of leadership of the ill-famed “international community.” There is David Cameron, the right-wing leader of the country that has subjected Muslims to unspeakable torture and humiliation in Iraq and Afghanistan on the side of George W. and Dick Cheney, the president of vice. No wonder Obama or his lieutenants did not attend, which would have made the march even more obscene than it already was, given the reality of the more than one million dead in Iraq under U.S. occupation or the 14-year ordeal of Afghanistan or Guantánamo or the recent Senate report on systematic torture inflicted on Muslim prisoners by the CIA. There is, though, Angela Merkel, the leader of the country that sold in the 1980s lethal gasses to Saddam Hussein that would be used to poison tens of thousands of Iranian soldiers as well as thousands of Kurdish civilians, unarmed women and children included, during the Halabja massacre. Then there is Antonis Samaras, enjoying his last chance at glory before being ousted by the Greek people in the general election to take place in two weeks’ time, who notoriously compared the Charlie Hebdo massacre to the uncontrolled wave of immigration into his country, before taking his place on a march that declared the fraternity of all! No need to dwell on the rest of this string of right-wing bigots, headed by Jean-Claude Juncker of the European Commission, Mariano Rajoy of Spain, Matteo Renzi of Italy and all the other agents of the international bourgeoisie.

What better than to lend an ear to Bernard Holtrop, a Dutchman that draws for Charlie Hebdo under the pen name Willem, but was spared his life because he never enjoyed attending editorial board meetings? He said in view of the march: “We vomit on all these people who suddenly say they are our friends.”

The show of unity displayed by the so-called “international community” should not hide from view the fact that from day one this march was presented to the French public as demonstration of the “national unity” of the French people. Even the thought of putting up a show of “national unity” in such a case is ticklish. What, after all, does “Je suis Charlie,” the major rallying cry in protest of the massacre popular all around the world mean? Decidedly, it does not mean that we are all French! Together with the main visual representation of Charlie Hebdo used again all around the world, i.e. the pencil, the slogan means very clearly that we are all for the freedom of the press or, in more general terms, the freedom of expression. It is true that the attack on the freedom of expression came in France. Hence the expression of solidarity with the French people around the world implies encouraging the exercise of the freedom of expression in France despite the threat by the fundamentalists. It does not mean that all things French, including France's imperialist policy in the Middle East and Africa is condoned by the rest of the world! Just as the protest expressed by the French people in the face of this attack on their long-cherished freedom of expression does not mean that all of them condone the policies pursued by French state or the present French government in matters of foreign policy or questions of class or on immigration or methods of policing etc. So the appellation “unité nationale” for this march is an outright affront!

Some find comfort in the fact that the Front National (FN) of Marine Le Pen, the proto-fascist party that came in first during the elections for the European Parliament last May, has been cordoned off politically. Let it first be said that François Hollande was not as clear on this matter from the very beginning, as the international press depicts him to be. It is only after the whole French left, including major figures in his own Socialist Party, heaped scorn on the prospect of the presence of FN at the march that Hollande made up his mind not to invite Marine Le Pen. However that aspect may have played itself out, large sections of the French people would certainly not feel any “national unity” with former French President Nicolas Sarkozy, who was dubbed “Sarko facho” during the events of 2005 by the youth when he, as Minister of the Interior, called the “beurs,” French youth of Arab origins, as racaille (scum) orvoyous (thugs) and even went so far as to saying that the cités should be cleaned with Karcher, a drug for vermin! The Kouachi brothers, Said and Chérif, who gunned down the Charlie Hebdo cartoonists, were then in their early twenties and it is difficult to know what part the former Minister of the Interior played in their radicalization with his disparaging remarks and his extremely repressive policing techniques. To march in national unity behind this Nicolas Sarkozy and his ilk was no doubt nauseating to many a French person!

To bring the forces responsible for the radicalization among Muslim youth living in western countries that incites them to this kind of massacre is to insult the Muslim population of these countries. Sarkozy was not the only one. According to credible testimony, in another show of “national unity,” the French police was “systematically acclaimed” throughout the march (Le Monde). It is a well-established fact of French life, and the author of these lines has witnessed this personally on different occasions when in Paris, that the French police are extremely, and almost wantonly, brutal on minority youth, harassing, affronting and humiliating them whenever they can. To acclaim this police force and raising placards that read “Je suis Charlie” and “Je suis policier” simultaneously send a clear message to the minority youth of France that they are not wanted. The reality on the ground is that the police are a constant threat to these youth. No amount of gorging out of the slogan “unité nationale” will do away with this fact. So to applaud the police before changing its ways really means that the national unity aimed at by the French establishment leaves the minority populations out.

And of course if there is constant harping on national unity, with only a handful of far left groups challenging the idea, “a French version of the Patriot Act” (Le Monde) is easily brought on the agenda. Make no mistake: the French government will make use of this newly-found “national unity” not only to prop up the prestige of François Hollande, which has recently been sinking in opinion polls consistently, but also to create a security atmosphere in order to trample on many a liberty.

Our response to the national unity march should really be expressed in the same manner as this placard that was put up in Ménilmontant: “Je suis en deuil, pas ‘en guerre’. L'Otan, ‘unité nationale’, l'Europe forteresse,,, Non merci!” In other words: “I am in mourning, not ‘at war’. NATO, ‘national unity’, fortress Europe... No, thank you!”

Charles de Gaulle was a historic leader of the French bourgeoisie, who, while in residence in London, was propped up as “la Résistance” by the Americans and the British toward the end of World War II, while communists were busy arm in hand ridding French territory of the Nazis. He then led France through the Algerian war (1954-1962) and the revolt of 1968, when he, as president of the republic, had to temporarily flee to a NATO military base in Germany, before returning and bringing the situation under control. He was a reactionary nationalist. Ironically, Charlie Hebdo owes its name to this man. After having been shut down by the government for its iconoclastic editorial policy, the magazine came out with a new ironic name:Charlie Hebdo. The march in Paris dedicated to Charlie Hebdo was supposedly declaring its homage to Charlie Hebdo, by writing everywhere “Nous sommes tous Charlie.” However, it would have been truer to the nature of the march had organizers picked up another slogan: “Nous sommes tous Charlie de Gaulle”!

Sungur Savran is based in Istanbul and is one of the editors of the newspaper Gercek (Truth) and the theoretical journal Devrimci Marksizm (Revolutionary Marxism), both published in Turkish, and of the web site RedMed.