Notes on the second round of the French Presidential Elections 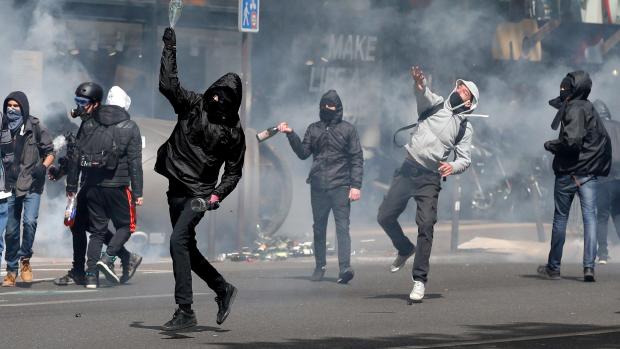 These notes are from a speech made in a public meeting organized by the EEK (the Workers’ Revolutionary Party, Greece) in Locomotiva in Athens on May 8, 2017, the night after the second round of the French elections. The full speech and discussion was broadcast live by the facebook account of EEK.

The Pharaonic celebrations around the Pyramid in Louvre organized by Macron's advertizing team of the “ En Marche!” Macronites, with the President-elect mimicking a parody of Mitterand cannot hide the reality behind the results of the second round of the Presidential Elections in France.

The favorite of the Medef, of the banks, and of the EU, Macron is obviously the victor with 66 per cent of the vote against 34 per cent that his fascist rival Marine Le Pen got. But, first of all, nobody can ignore that a total of 36 per cent of the voters has chosen either to abstain – abstention( 25 per cent) was the greatest from 1969- or to vote blank or spoiled( about 4 million votes). More than a third of the entire electoral body has rejected both candidates.
The majority, more than 60 per cent, according to the polls, of those who voted Macron not only are not Macronites but also reject his program; they voted for him, politically blackmailed to prevent, at any cost, a victory of the far right.

The centrifugal forces in the artificial “movement” around the new President are already in action as the parliamentary elections in June are near and the defeated traditional main parties, the Right of “Les Républicains” and the pulverized social democrats will try desperately a coming back either to impose a “cohabitation” to Macron or simply by join him opportunistically. Macron, of course, will use the advantage given to him by his electoral victory and position to form a presidential majority in the National Assembly. Even if he wins in his plans, the Macron Presidency will be weak and extremely vulnerable to the coming political, social, and economic upheavals.

The main conclusion, drawn already from the first round, is that the entire political system of the 5th Republic is in shambles; it is not just a crisis of bourgeois parliamentary representation but a regime crisis, a crisis of political power and of class domination. The final results of the Presidential elections sharpen this crisis.

The 5th Republic is exhausted. Historically, in France, every transition from one Republic to the next was driven either by a coup or a war or a revolution, never peacefully.
The celebrations in Brussels and in Berlin for Macron's victory are temporary as all EU leaders and above all the German bourgeoisie and its governing parties know it very well.
Macron will try to strengthen the position of French capitalism in deep crisis by trying to advance “reforms” in the EU and in the eurozone such as a common fiscal budget, a common finance minster, a common financial instrument (euro-bonds), and a bank union. All these fundamental so-called “reforms” mean a “transfer of funds”, and consequently are anathema for the ruling class of Germany, to its parties and their electorate.

Macron said that he will try to win the confidence and cooperation of the German bourgeoisie by introducing, first in France, deep “reforms” to the deficit ridden, over-indebted, French economy (the debt is a 100 per cent of the GDP) reducing its deficits by a hard neo-liberal program involving first of all a further “liberalization of the labor market” that has already started with the El Khomri-Macron Law. This anti-Labor law, as we all know, produced the biggest mass movement for many decades of workers and youth in 2016, reviving memories and traditions of struggle of May 1968.

Macron is dedicated to escalate this confrontation, if he wants to have any chance to “repair” the nearly broken German-French axis of the entire EU project. For this reason he rejected the last minute proposal by Mélenchon to abandon his support to El Khomri law in exchange for a call to support him in the second round.

The new President is already in collision course with the workers and youth. The trade union “Front Social” of the CGT-FO-Solidaires-SUD has already called a demonstration in Paris the first day after the second round. Despite the collaborationist trend in the trade union bureaucracy asking for a "dialogue" with the President, the main slogan of the demonstration in Paris was: "Macron Resign! One day in power was enough!"

The youth, on the same night of the second round, during the “celebrations”, clashed with the police during a mobilization in the working class Parisian neighborhood of Ménilmontant.
Undoubtedly the endgame between the opposite irreconcilable class forces will be played out in the arena of class struggle in France, in Europe and internationally.

Those who voted for Macron on May 7 did not at all given to him a blank check to take austerity measures, which will deteriorate further the social pain in a society already deeply and inexorably fractured by the ten year-old insoluble world capitalist crisis.
Marine Le Pen who doubled the votes that her father won in 2002 in the second round expects precisely this catastrophic policy to take its political revanche, perhaps even before the next Presidential Elections of 2022.

The threat presented by the FN should not be underestimated. It is not just another bourgeois party, and Marine Le Pen is not just another chauvinist. Any underestimation could play to the profit of the “de-diabolisation of the FN” trap, elaborated and put many years now in play by its leadership. Already acceptance of the FN, of its anti-EU nationalism and of its anti-immigrant ideas contaminate the far left including well known Marxists like James Petras who has called to vote Le Pen. It is a lie that the FN is the “party of the working class”. Unfortunately still the party of the French proletariat is that of abstention. When appears even a hope for a (distorted) radical left perspective, as with Mélenchon, cities that were strongholds of the FN such as Marseilles or Avignon in Southern France or Lille turn to the left. Even in Aubervillers, in the banlieu of Paris, it was not political apathy nor abstention but Mélenchon who came first.

Marine Le Pen tries to exploit, for her counter-revolutionary, anti-working class, anti-immigrant racist policies, the social anger and the disgust of the masses against all the Right and “Left” traditional parties of the political system, culminating in the “social-liberal” anti-popular policies of the Parti Socialiste during Hollande's Presidency.

The “re-novated”, “de-demonized” Front National pretends to be an “anti-systemic” party, a “party of the French people” In reality it is the enemy of the people, and the counter-revolutionary product and weapon in last resort, of the capitalist system itself in its decay. It embodies the legacy of French colonialism and imperialism, of racism, anti-Semitism and Arabo-islamophobia, from Gobineau and Mauras to Pétain and the Vichy regime, from the torturers of the Algerian people, including Jean-Marie Le Pen in person, and OAS, to the police barbarians who kill or rape the youth in the banlieu.

Neither the neo-liberal banker Macron nor the ballot box can eliminate the deadly danger of the FN; only the direct action of the working class and the youth can do it by opening the road to a social revolution, workers power and the socialist unification of Europe.
What is to be done and how?

Those who represented the Left in France, the social democrats of the PS or the PCF tail-ending social democracy or liquidating itself to the demands of the “left” social patriot Mélenchon are definitely political zombies. Mélenchon himself, with all his pretensions as caudillo, defends a program of bourgeois economic nationalism, where even the migrants, the most defenseless section of the proletariat become victimized. Now he demands that everybody on the left has to liquidate into his “movement” in the coming parliamentary elections in June.

The NPA takes another step towards liquidation by possibly turning to Mélenchon's “movement” to “create a new broad force in the Left”. The Lutte Ouvrière remains restricted to its syndicalist practices and political conservatism by eternally postponing bold revolutionary politics as “premature”.

But we have to not remain blind to a revolutionary young generation of proletarians and dispossessed coming to the arena of the struggle, demanding to change the world. A recent survey ( see https://qz.com/…/europes-youth-dont-care-to-vote-but-theyr…/) show the grapes of wrath among the youth: “Around 580,000 respondents in 35 countries were asked the question: Would you actively participate in large-scale uprising against the generation in power if it happened in the next days or months? More than half of 18- to 34-year-olds said yes.

The question was part of a European Union-sponsored survey, titled “Generation What?” The report went on to focus on respondents from 13 countries to better understand what young people are optimistic and frustrated about in Europe. Among these spotlighted countries, young people in Greece were particularly interested in joining a large-scale uprising against their government, with 67% answering yes to the question. Respondents in Greece were also more likely to believe politicians were corrupt and to have negative perceptions of the country’s financial sector.

Many people on the “left” dismiss them as “anarchists”, “to-tos” (autonomists) or “casseurs”. But within the grapes of their wrath are the germs of a coming social revolution at the heart of Europe. For its victory we have to prepare and build a Revolutionary Workers Renaissance around a revolutionary program and organization, with a clear internationalist orientation.
The real battle is not between “globalists”/ “Europeanists” versus “patriots”, the supporters of French chauvinism, far right, right or even under a “left” disguise. The real battle is between internationalism in action against all the ruling classes of Europe. After many decades, we live the birth pangs of the confrontation between revolution and counter-revolution in the Continent where capitalism was born and now is in advanced senility and decay.

The 4th Emergency Euro-Mediterranean Conference that we are organizing in Athens on May 26-28, 2017 is a step for that preparation.