A note on the first round of the French elections 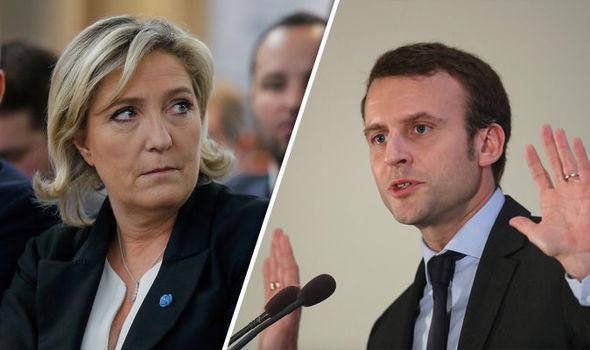 1. The  first message of the first round of the French Presidential Elections on April 23 is clear: the bourgeois political system of France is in shambles exacerbating all the contradictions in Europe and internationally.

For the first time in the history of the 5th Republic no representative of the two main traditional parties alternating in government for six decades, the Right and the social democrats,  is present  the second round after two weeks. The PS is paying, first of all, the price for Holland's  disastrous and anti-popular quinquennat, is in ruins with Hamon getting only a miserable 6,35 per cent. The Right, which was hoping for an easy alternation in power after  the PS' political bankruptcy, was eliminated as well. The two candidates for the second round will be Marine Le Pen of the fascistoid Front National and Macron, a  banker and neoliberal non-Party political non-entity, artificially produced, as a  desperate, short-term alternative by the  French ruling class, supported by MEDEF and most of the media, by  the EU and Berlin ( both by Merkel and the SPD).

Definitely, this is a political regime crisis, not a simple crisis of parliamentary representation but a crisis of governability, a crisis of political power and class domination.

2.  The meltdown of the 5th Republic bipartisan system is the product of the unresolved and unresolvable  post-2007 world capitalist crisis as it exacerbated all the contradictions and unbalances of the EU imperialist project,  whose axis is positioned  in the relation between France and Germany,  having a devastating  social impact on the workers and popular  masses. No French President  elected in May 7, either, more probably, the pro-EU Macron or the anti-EU Le Pen can resolve the crisis in  post-Brexit  EU in decomposition.

The impact on the crisis in France produced already an ever  worsening social disaster,  a Greece in the making, with increasing unemployment (officialy at 10 per cent) and precarious, “flexible” labor. Social polarization  had driven in 2016 the  mass mobilization against the anti-Labor law El Khomri, with all parties in parliament taking an anti-labor stand. But this social polarization, because of the failure of the left (including the far left)  has not found an adequate and necessary expression in a political polarization, everything being postponed to the coming Presidential elections- and their impasse.

In the elections appeared a distorted picture of political  polarization , particularly as the last weeks  there was a surge of support to the left nationalist social democrat  Mélenchon, catapulting his “movement” France Insoumise   from 10 to 20 per cent. But no neo-Keynesian program and economic nationalism propelled by a non party and anti-party “Movement” centered around one individual  posing as a Saviour and  a De Gaulle of the left could provide a real  alternative to the political power crisis. The PCF was dissolved  to Mélenchon's movement and the Trotskyist candidates of the NPA and LO paid for their centrist, opportunist or sectarian  errors of their political trajectory.

The “polarization”   between  Macron and Le Pen is not a real but a fictitious one. First, the majority of those who have voted on April 23 are not represented there. Actually there was not an electoral political polarization but a pulverization:  4  candidates  have attracted each  either  a few points above or below  the 20 per cent.

So already, there is a contradiction between the existing social polarization and the non existing “political  polarization” over the Presidency.

A Presidency under Macron could not  resolve the deepening structural capitalist crisis or the unbalance between the French deficits and the German surpluses or solve the sovereign debt crisis of France or of the enormous French and European banking crisis, the crisis in the eurozone. His neo-liberal program, particularly his  intention to advance “liberalization of labour” schemes will put him from the beginning  in collision course with the working class which will surpass by far the “French Spring” of 2016.

2017 is not 2002, when Jean Marie Le Pen got to the second round. Support  in the second round to Chirac did not prevent the far right to go from 4.8 m votes     in 2002 to 7.6 m in 2017. Marine Le Pen tries to  exploit the social anger for  her counter-revolutionary, anti-working class, anti-immigrant racist policies. If she wins the Presidency a near civil war situtaion could develop in the country, and it will be the brutal end of the EU itself, despite all the compromises that the “peste bleu marine” will try.

3. For this reason,  we support more than ever that the  revolutionary line in relation to the second round. It was already  expressed by the young revolutionaries demonstrating from the first moment in  Place de la République in Paris or in Reims and clashing with the Police State built by  social democrats and rightists . We call in solidarity with them: Ni patrie ni patron /ni Le Pen ni Macron!

It is urgent now, more than ever, to build a real communist, revolutionary, internationalist alternative and organization. Neither liquidation to Mélenchon's “movement” nor self-destruction by repeating all the past errors of the far left by expecting  paralyzed “ a new force to emerge in the Left”.. As some young French comrades say already, it is needed urgently a Rennaissance Ouvrière Révolutionnaire.

The coming Emergency 4th Euro-Mediterranean Workers Conference in Athens on May 26-28, 2017, has put on its agenda a special debate on the results and prospects of the struggles in France and Europe, for workers power, to overthrow the   imperialist EU and for  a United Socialist States of Europe.