The new “Rabia” of Erdoğan’s despotism: Israel, the UAE, Saudis and Egypt 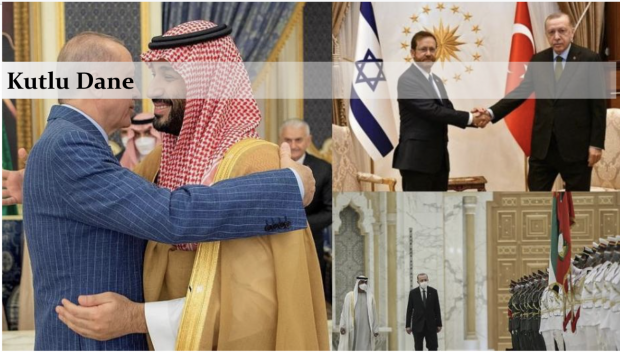 In the wake of the US-Israel-Saudi orchestrated coup that removed the Muslim Brotherhood from power in Egypt, Erdoğan introduced his well-known “rabia” (meaning “the fourth” in Arabic) sign. This sign is meant to “defy” Sisi as the new dictator of Egypt, the US as the power behind the failed coup attempt in Turkey in 2016, Fethullah Gülen’s (an ally-turned-nemesis of Erdoğan) collaborators the United Arab Emirates (UAE) and Saudis, and even Israel when needed. We, as the Gerçek newspaper, scraped off the gilding of this “defiance” towards the reactionary governments, Zionism and imperialism by Turkey’s despotic regime at every opportunity. While we take Erdoğan’s conflicts with some of the regimes in the region very seriously, we were never illusioned by his relationship with Zionism and imperialism and always warned our people. With the economic crisis of the last few years, the economic policies that only aim the survival of the despotic regime and NATO's war in Ukraine, Erdoğan quickly proved us right As the despotism chases dollars, the old “rabia” is nowhere to be found. And a new “rabia” replaced it: Israel, the UAE, Saudis and Egypt.

Among this quartet of evil, Erdoğan first visited the UAE, formerly the object of his profane remarks at political rallies after the coup attempt in Turkey. This was followed by Israel, once criticized with his “one minute” rebuke. Thus he opened the first two doors. The third one followed at the end of April. Erdoğan visited the Saudi royal family, the butcher of a journalist in the embassy in Istanbul, the bane of Yemeni people and the great financer of Zionist interests.

“The leader of Umma and the region” is greeted by a governor!

The pro-government media kept up its previous acrobatics in presenting the normalization with the UAE and Israel as a victory. But the dollar-indexed politics of the government is so pitifully obvious that no amount of mental gymnastics can hide it. First of all, the alleged invitation of Erdoğan into Saudi Arabia is suspect. The Saudi media reports that this happened after a request by Erdoğan. Secondly, Erdoğan’s hand is so weak that he had to end the Khashoggi trials in a hurry before his visit and had to hand it over to Saudis who have already closed their own sham trial, since the Saudis refused to meet unless this condition was satisfied. Furthermore, at the airport he was greeted by a governor (Emir of Mecca), against all diplomatic conventions, and was also sent off by the same governor. The fact that he only mentioned the possibility of tourists coming from Saudi Arabia during his speech to the media after Ramadan prayers signifies that the visit did not reach all of its goals.

Just as we warned that the normalization with the UAE and Israel is not in the interests of our peoples, we warn now that nor is this normalization with Saudi Arabia. These four countries are responsible for putting a shackle on the region at the behest of imperialism and Zionism, the political turmoil and the poverty of Iraq, Syria, Lebanon, Palestine, Libya and Yemen as well as the working class not having a single shred of rights in the region. Israel looks for European customers for the natural gas it stole, and the others seek to buy cheap assets in Turkey using their oil revenues.

Egypt is now on the agenda in the following days. Erdoğan gave the signal very clearly when he said “the dialogue with Egypt can be raised to the highest level” on his way back from Saudi Arabia. His announcement of the displacement of an Egyptian opposition TV channel based in Turkey to somewhere else, on the day of his travel to Saudi Arabia was a harbinger of things to come.

Those who humiliated our people by plundering the 128 billion dollar worth of their savings, are now planning to rip us off again by approaching the likes of Saudis. But in reality the interests of all peoples in the region, including Turks and Kurds, lie in the fall of these regimes, and the expulsion of imperialism and Zionism out of our region. When the Saudi authorities demanded the files for the Khashoggi murder trials, Erdoğan retorted by saying “they take us to be fools”. But today it is understood that Erdoğan himself takes us, the people, as fools.