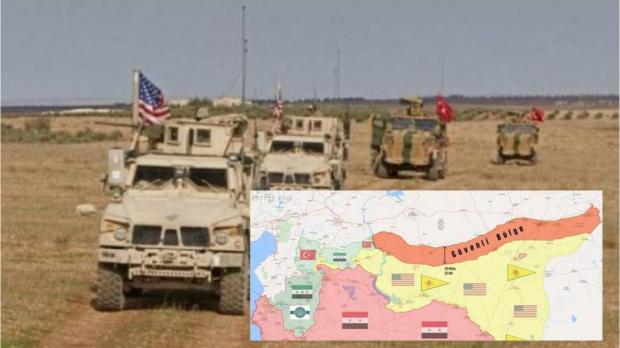 This is the English translation, in somewhat abbreviated form, of an article published in Turkish on the web site of DIP on 11 August 2019 (https://gercekgazetesi.net/gundemdekiler/firatin-dogusunda-nato-koridoru-anlasmasi). An even more emphatic article along the same lines was published on the web site of DIP several days ago (https://gercekgazetesi.net/gundemdekiler/dun-de-bugun-de-yarin-da-plan-ayni-plan-nato-koridoru).According to the latest news, the analysis in the article you are about to read to the effect that, despite all appearances to the contrary, the United States is, in fact, more than happy to let the Turkish army control the north of Syria, west and now east of the Euphrates, since this would mean NATO control of the region against the twin targets of the US, Iran and Syria. The concept “NATO corridor”, it should be noted, is the answer given by DIP to the supposed “Kurdish corridor” that the US is alleged to be building with a view to create a “greater Kurdistan” extending all the way to the Mediterranean Sea, a theory championed by all kinds of Turkish nationalists who see red even at the mention of the word “Kurdish”. These chauvinists are now being, and not for the first time, proven entirely wrong. The same is unfortunately true of the Kurdish movement that counted on American protection against Turkey, a NATO member with the second largest army in that imperialist alliance, although constantly warned by the real friends of the Kurdish people that the slightest trust in the US would prepare the ground for a serious debacle for the Kurdish cause for emancipation.

For some time, Turkey has been proposing a safe zone to the USA, using the PYD/YPG control east of the Euphrates as an excuse. After mutual declarations, the military representatives of these two countries reached an agreement. However, this is more of an impression, as none of the articles of this agreement has been made public nor substantiated. There is also no concrete schedule.

It can be deduced that the articles have been carefully written in a way that enables a success narrative for the Turkish side while not violating the will and control of the USA on the ground. The wording was picked carefully with this in mind. Before the agreement, Turkey was saying “we will go in”, while the USA insisted “we will prevent that”. Now there seems to be a single concrete outcome of this agreement and that is to prevent Turkey from intervening in the region on its own.

Confession from a general recently retired at the Supreme Military Council meeting: an operation for appearances' sake

Meanwhile, the brigadier general who commanded USA-Turkey joint patrol operations in Manbij, Erdal Şener, made an important statement after retiring. After stating that the USA obstructed behind closed doors a possible operation by the Turkish army, he claimed that the declarations of a safe zone and a joint operation are just means of misleading the public opinion.

The brigadier general is not a random soldier. He speaks with the experience of having led the “joint operation” on Manbij: “I patrolled Manbij with the Americans. We could not enter Manbij for a single day. It was a patrol just for appearances’ sake. Now they talk about a 30-40 km deep zone. That’s just a dream.”

Just a few days after the agreement with the USA, the Turkish minister of foreign affairs, Çavuşoğlu, suddenly made a statement with a harsh tone: “We will not let America stall us as they did in Manbij”. This implies that the USA, just as before at Manbij, is going on with its own plans while soothing Turkish public opinion. Turkey has not been able to impose anything on the USA. The whole process is continuing  under the initiative of American imperialism.

The “safe zone” is not against American interests

On the other hand, it should be recalled that the USA never fully opposed the Turkish army, as an army that is part of NATO, entering Syria. In fact, at the beginning of the Syrian civil war, the USA tried for a long time to get Turkey to enter Syria. Since the USA has gained control of the ground to the east of the Euphrates through the PYD/YPG militia, that relationship continuing to this day, the USA does not want a conflict between the Turkish army and the PYD/YPG. But this does not imply that the USA strategically favors PYD/YPG over the Turkish army. On the contrary, the USA aims to position the Turkish army, a NATO army, against Assad in Syria and Iran in the region. As for the PYD/YPG, the US wants to continue using them tactically and operationally. From this perspective, a “safe zone” might be more in line with US interests than those of Turkey. If a safe zone is organized so that the conflict between the Turkish army and PYD/YPG is prevented, the NATO army would be able to enter deep into Syria from Idlib to the Iraq border, and at the same time, the PYD/YPG would be positioned alongside the Euphrates river against the Syrian army.

In this sense, the USA wants to create a NATO corridor throughout northern Syria and have the PYD/YPG fight against the Syrian army and its supporter Russia rather than the Turkish army. US imperialism viewed the Shield of Euphrates operation in Azaz, Jarabulus, and al Bab as well as the Olive Branch operation in Afrin favorably for these reasons. The apparent disagreement with Turkey even helped obtain the support of Russia. In the end, west of Euphrates became part of the NATO corridor. Now the US aims to create a NATO corridor in the region that it controls. It will be too late when Russia finally understands that it allowed the NATO army, which supports the Free Syrian Army and other thugs into north-west Syria with its own hands. James Jeffrey, who openly stated that “it’s time to pull the plug on Astana”, is still in place and the USA will surely use the “safe zone” discussions to undermine the Astana process in Idlib.

The US is the enemy of peoples everywhere, including the Kurds

Of course, for this plan to work, the US must eventually create a platform to cease hostilities between the PYD/YPG and Turkey. Indeed this process also involves peace talks between Turkey and the PYD. The latest developments indicate that the PYD favors such an agreement with a view to halt the intervention of Turkey. Instead of rejecting the “safe zones” outright, they take the position of regarding the “deployment of Syrian militia” as a red line. Moreover, the military official Mazlum Abdi of the Syrian Democratic Forces, led by the PYD, says that they are a part of the USA-Turkey talks and they support the efforts of US Syrian representative James Jeffrey.

It is no surprise that Abdullah Öcalan, who kept his silence since before 23 June Istanbul elections, now suddenly says “I am ready for a solution of the Kurdish problem”. He also called the Syrian Democratic Forces (SDF), after being allowed to talk to his lawyers for the first time in 8 years, to be “attentive to the sensibilities of Turkey”. This coincided with the statements of PYD leader Salih Muslim and SDF military official Mazlum Kobani saying they were in contact with Turkish authorities through mediation of the US.

Those who think these efforts and initiative of the US are well-meant are in grave error. The US has never cared for a solution to the Kurdish problem and they don’t care now. Their only goal is to use Kurdish armed forces as a proxy, completely under their guidance. Those who think there’s a “revolution” in Rojava, a model self-management system established in the region in partnership with the US are going to have a bitter surprise. The US, who did not make any single concrete promise to the Kurdish movement aside from the fight against ISIS, would betray the “self-management” experiments to a NATO corridor without a moment’s hesitation. It is, of course, highly probable that certain elements in the Kurdish movement would resist that. But the US is most likely already prepared for this possibility. Indeed, they already provoke conflicts within the Kurdish movement. James Jeffrey, the most powerful regional top official of the US, which has promised a bounty on the heads of PKK leaders, said last year, “we can pit the YPG in a fight against the PKK”. As a result, those who expect to reach a deal under the patronage of the USA may suddenly witness a Rojava civil war, or worse yet a Kurdish civil war.

No to the NATO corridor! Peace with the Kurds, war on the USA!

To those who keep their eyes open, for those who are against imperialism and for the brotherhood of peoples, there is no “safe zone”, “peace corridor” or “opening”. There is a NATO corridor being created step by step. The USA promises peace only to those willing to accept their patronage, and even for those they demand to spill the blood of their brothers. The US markets the “NATO corridor” to the Turkish people with a nationalist packaging and lies to the Kurds in their promises to keep them safe. When it is clear as day that no operation made by Turkey on Syria can have an anti-imperialist character, one cannot stay silent to the provocation of hostilities and war between fraternal peoples with this “peace corridor” nonsense. The only way for the working classes in Turkey to expose the lies, to frustrate the games of the despotic Turkish regime with the USA, to stop the NATO corridor and to establish the brotherhood of nations is to declare “peace with the Kurds, war on the USA”!