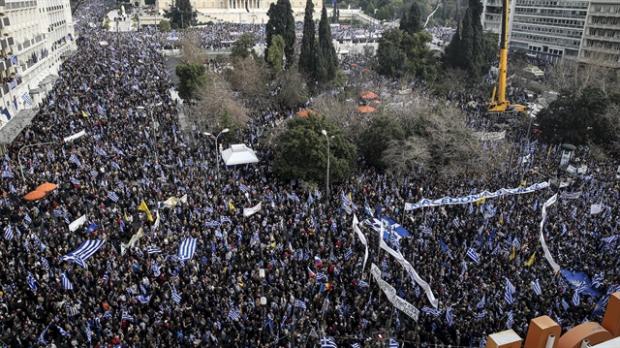 Two Balkan states, namely the Republic of Macedonia and Greece, are waging a bitter feud with one another over a name issue for some twenty-odd years. While Macedonia, among the former republics of federal Yugoslavia, wanted to keep this name after the collapse of the federation, Greece took a firm stand to impede this new republic from using the name of Macedonia, on the basis of the claim that this name belonged to Hellenic history. Lately, discussions are underway under the aegis of the US and EU imperialists and NATO, for a solution that will pave the way for Macedonia's NATO membership.

US imperialists and NATO want to exploit the subservient stand of the Syriza government, after the July 2015 capitulation and the introduction of a third package of austerity measures (the worst so far) in order to solve the "name dispute", to end the post-2008 veto of the Greek state and to open the doors of NATO to the Republic of Macedonia, completing in this way the encirclement of Russia and the control of the gas and oil flow from the Middle East and the newly found deposits in Eastern Mediterranean to Europe. The EU imperialists also want to speed up the solution to the "name dispute" between Greece and Macedonia to move forward towards the integration of the Western Balkan states of former Yugoslavia plus Albania to an expanded EU until 2025, to overcome the centrifugal forces putting in danger the entire EU project. Syriza and a large part of the Greek ruling class is going along with these imperialist plans hoping to achieve a regional hegemonic role in the Balkans (a policy that had led to a catastrophe in Anatolia in 1922).

On the other hand, the Greek bourgeoisie is trying, at the same time, to exploit the popular anger generated, accumulated, and reaching a point of explosion after 8 years of draconian austerity and disappointment from all parliamentary parties, and from the capitulation of Syriza to turn this anger to a nationalist frenzy, to possibly overthrow the government from the right and creating a far right pole on the right of New Democracy, as a possible alternative to the crisis of bourgeois rule. The mass rallies in Thessaloniki on January 21 and in Athens on February 4 (with the participation of about 200-300 thousand people) with speakers in Thessaloniki a General, Frankos Frangoulis, finishing his speech with the cry "Long Live the Army! Long Live the Special Forces" and in Athens the renegade from the Left ex-Stalinist composer Theodorakis calling for a fight "against left fascism and the national-nihilists" have a totally counter-revolutionary character. The Greek left and far left are also in troubled waters. The KKE, despite its anti-NATO rhetoric, denies the existence of a Macedonian nation in the former Yugoslav Republic and a Macedonian minority in Greece, and opposes both the nationalist rallies and the anti-nationalist counter-mobilizations. LAE (Popular Unity, ex-Syriza, left nationalists) declares "the expansionism of Skopje" the main enemy. Antarsya, including NAR, are paralyzed. Internationalists in protest split from DEA (supporters of the US ISO, now a faction in LAE) but also from NAR.

The EEK (the Workers' Revolutionary Party, one of the founding parties of RedMed), on the other hand, is deeply involved now in the struggle against the wave of savage Greek nationalism orchestrated by the right, the far right, the "Golden Dawn" Nazis and the Greek Church obscurantists taking advantage of the negotiations between the Tsipras and Zaev governments to settle the infamous "name dispute" on Macedonia, under the impulse of the US/NATO and EU orders. The EEK has denounced both the government pro-NATO policy on Macedonia but also the nationalist frenzy and the fascists who take advantage of the situation organizing pogroms against leftists and anarchists and burning squats like "Libertatia”in Thessaloniki. The police, of course, not only protect the "Golden Dawn" storm troopers but the riot police itself has attacked in Athens the headquarters of NAR. The government is threatened to fall, as Syriza's partners, the far right nationalists of ANEL (Independent Greeks) are against any settlement of the name dispute that include the name “Macedonia". There is a growing polarization between nationalism and internationalism within society and within the Left.

The EEK is participating in the anti-nationalist actions and is becoming the focus for rallying internationalist forces. On February 7 the EEK organized a public meeting on Macedonia, with the participation of other internationalist forces. The fascists are threatening the party but the EEK is standing firmer than ever. It opposes both the pro-NATO pro-EU Syriza government and the anti-government mobilization of nationalist, right wing, far right and openly fascist forces. It defends the right of self-determination for the Macedonian people, including the right to choose their own name, and it advances the perspective for a Balkan Socialist Federation. Even in the most difficult days of a “sacred union”within the forces of Greek bourgeoisie, the EEK will continue to fight as the pole of internationalism and the revolutionary Marxism, on their way to the creation of a socialist commonwealth of the Balkans, where Greeks, Macedonians and all the peoples of the Balkans will live in harmony.