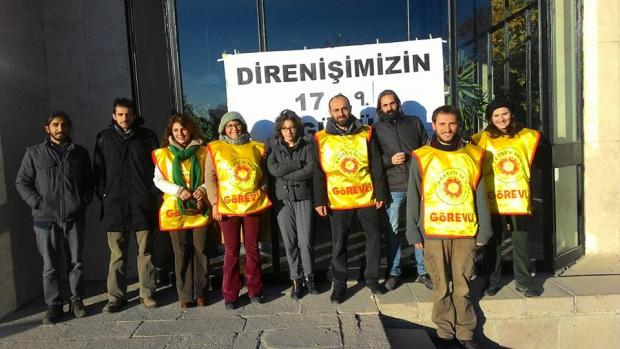 Last summer a notable group of academics, unionists and politicians from around the world powerfully protested against the search for a very heavy disciplinary sanction against some junior academic staff of the Middle East Technical University (METU) in Ankara. This petition questioned the future relations of the international community of progressive academics should the university persist in its persecution of the staff in question. Some of us were signatories to this petition. Fortunately for the future of our relations with METU, the charges were dropped at that time. Even the reactionary Board of Higher Education, set up with the purpose of bringing Turkish academia into line with the reactionary policies of the junta of the early 1980s, did not deem appropriate the extremely heavy measures demanded by the administration of METU.

Now one and a half years later, the dossier has been opened up one more time! It is incredible that a member of the staff is deemed worthy of expulsion from public office and disbarred for life and yet is left alone and can freely conduct activities inside the university for such a long time. Why this total neglect for a year and a half of the question and the sudden rehashing now? There are two explanations for this anomalous situation. First, the university now has a new president, who lost the elections in which his peers voted in another professor, but was nonetheless appointed by Recep Tayyip Erdogan in lieu of the winner, in line with the shameful legislation for the selection of university presidents in Turkey. Apparently, the brand new president is paying his respect to the powers that elected him. Secondly, and much more importantly, after the passing of a full year and a half the question is brought back on the agenda because Turkey is now ruled with the State of Emergency declared after the 15 July failed coup attempt. This exceptional regime is used by the AKP government in persecuting in wholesale fashion not only the perpetrators of the coup, but all kinds of opposition that no sane person can link to the coup. So the present METU administration is very obviously making opportunistic use of Turkey’s present-day repressive regime to open closed files and settle old accounts.

We protest strongly against this sinister recourse by the new METU administration to the very anti-democratic regime that exists today in Turkey. METU, with its long progressive history, does not deserve this shameful act to pass into its history. We fully support the earlier petition, signed last year by many of us, which we provide as an appendix hereto.

Retract the punitive procedure against unionists at METU!

The recent events at the Middle East Technical University (METU) are a serious source of disturbance for the international academic community and concerned scholars around the world. In the past, many of us have attended scientific conferences of high quality at that distinguished institution of higher learning. METU has also been at the forefront of progressive social and political movements since its early days. This half-century long tradition was recently revived and the METU community was heavily involved in the progressive social movement of 2013 in Turkey, more commonly known as the Gezi movement after the park in Istanbul that the government tried to demolish so as to make space for a shopping mall, though the movement was a national one that also had a strong component in the capital city of Ankara, where METU is.

We have been informed that two employees of METU, Mert Kükrer, a research and teaching assistant, and Barış Çelik, a technician, are under attack for their trade union activity. Mert and Barış are both union leaders at the local Ankara branch of the Education Union of public employees (Eğitim-Sen) and were heavily involved in the organising of a very strong strike movement last December, in which more than a thousand employees of the university took part to put forth certain economic demands. Their file has now been sent by the university administration to the Higher Education Board, a body that was established by the military dictatorship of the early 1980s with the explicit purpose of domesticating universities politically and whose legitimacy has never been recognised within the progressive community of academics. What is more, this institution has recently been closely controlled by the AKP government of Recep Tayyip Erdoğan. The demand the university administration has made is the expulsion of Mert and Barış from their jobs and a lifetime ban on public service for both of them.

Mert and Barış have now set up a tent in front of the premises of the university president and are picketing for the retraction of this procedure. Two different petitions have been signed by local academics, one by over 200 professors from other universities and another by professors of METU. The traditionally colourful graduation exercises of METU were replete with protests by the students against this move by the university administration against Mert and Barış.

We the undersigned protest against this attempt at the persecution of two employees for their union work and the extremely punitive measure that has been demanded from a notoriously repressive organ. This move by the METU administration creates an extremely awkward situation for the progressive academic community and concerned scholars all around the world in their future relationship with METU. We therefore demand the university administration to review its procedure and retract any moves for punitive measures against the two unionists.