Messages of EEK and DIP to the 56th International Antiwar Assembly 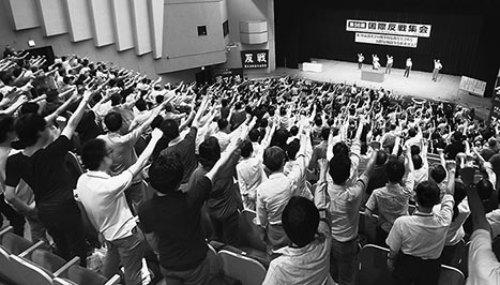 The 56th International Antiwar Assembly, organised by the All-Japan Federation of Students’ Self-Governing Associations (the Zengakuren) and the Japan Revolutionary Communist League (JRCL), was held in Tokyo as well as six other Japanese cities on the 5th of August 2018, just one day before the anniversary of the brutal nuclear attack of US imperialism to Hiroshima. Even though the solidarity messages of the organizations reflect different approaches to the issue of war and imperialism, the event itself was an important meeting for the discussion of the possibility of a new world war and its consequences. Two members of the Christian Rakovsky Center, DİP (Turkey) and EEK (Greece) sent solidarity messages to the event. Both can be read below.

Hiroshima is not a tragic memory of the past but a dire warning for today. The bellicose rhetoric and actions of Trump's imperialist America, the escalation of war in the Middle East and Central Asia threatening to spread both further to Asia as well as to the Balkans and in Europe show that humanity has reached a high point of danger of annihilation.

Undoubtedly the threat and the imperialist war drive has as source the on-going , insoluble more than a decade now, global capitalist crisis.

Only an international socialist revolution of the workers and the oppressed can and must defeat imperialism and war.

This is also the main conclusion of the recent succesful Emergency Euro-Mediterranean Encounter held in Eretria, Greece, hosted by our Party, the EEK, and organized by the Balkan Socialist Center 'Christian Rakovsky" and the RedMed web network.( See in atachment the Final Resolution and Communique)

We pay tribute this year again to the memory of the martyrs of Hiroshima and Nagasaki, and we pledge to continue our common struggle, on a world scale, until the defeat of imperialism and war- and the victory of world Socialism!

on behalf of the EEK Savvas Michael-Matsas, General Secretary of the Central Committee of the EEK.

We salute the 56th International Antiwar Assembly and wish success to all the participants. Also, we wish to thank the organizers of this event for their invitation to us to send a message to the assembly. We would very much have liked to attend the assembly, in order to join the discussions on this very subject. But due to a host of reasons we cannot. On the 73 rd anniversary of the great massacre organized by US imperialists against the peoples of Hiroshima and Nagasaki, we remember the victims in great respect and humbleness and reiterate once again our resolve to struggle against all the forces that may, in the future, cause a repetition of such barbarism  anywhere in the world.

In Turkey, we are facing a regime of increasing oppression. Tayyip Erdogan, has won another election, which seems to be a milestone for the country since the new system of presidency voted on April 2017 provides the president enormous powers and weakens the power of the parliament. Regarding the domestic politics, Erdogan is a clear enemy of the workers class. On the other hand, his foreign policy has huge contradictions. After the failed coup of 15th July 2016, getting closer to Russia he seemed to blame the US imperialism for its support to the Gulen movement, which is the main actor behind the coup. But on the contrary, he is still eager to sustain the alliance between Turkey and the US imperialism: e.g. the İncirlik base of the US is still functioning, Turkey is still a member of NATO.

We witness a great tragedy for the masses of the Middle East. The civil war, which followed the brutal response of the Assad regime and the usurpation of the Syrian revolution - a continuation of the Arab revolutions - by the sectarian factions, turned most of the Syrian population into refugees. Also hundreds of thousands of people lost their lives. Gaza is under a brutal blockade. In Yemen, the Saudi led coalition backed by imperialism attacks the Houthis, and tries hard to clear the country from any political power which does not stand in line with Saudis, Zionists and imperialists.

The ongoing violence and possible new escalations are consequences of the desire of the US and European imperialists to strengthen their control on the resources of the Middle East, but perhaps more importantly, they are part of a general imperialist strategy, aiming to encircle Russia and China, both constitute fertile new markets for the US and European capital. This siege can easily be observed in Eastern Europe, the Balkans, the Caucasus, and Central Asia as well as in the South China Sea.

Although, DIP does not give any political support to Russian, Chinese or Iranian regimes and supports the revolutionary struggles against them, it fights for the defeat of the imperialist powers in their prospective wars with these countries, since DIP regards the US and the EU imperialists are the biggest threats against the interests of the world proletariat.

Nuclear weapons are certainly a scourge on the peoples of the world. However, unless there is complete denuclearisation around the world, we stand for the right of those countries that find themselves faced with the threat of imperialism to build and/or maintain their own nuclear arsenal. North Korea has the last remnants of a workers’ state and feels threatened by the presence of US troops to the level of 40-45 thousand soldiers on South Korean soil and a similar number in Japan. It is not right to ask for North Korean denuclearization under these circumstances. We have no confidence in Kim Jong-un. He may even be maneuvering to integrate his country into the imperialist capitalist system. But in its conflict with US imperialism we stand with North Korea.

In the case of Iran, there is a very clear strategy of leaving Israel as the only nuclear power of the Middle East.

All in all, we oppose any denuclearisation of China, Russia, North Korea and Iran, given the reality that the imperialist countries do own nuclear weapons.

But most importantly, the main strategy and relevant tactics must be the outcomes of the discussions in a democratic centralist world party, the International. Separate attempts and campaigns are of course precious, but we immediately need to build our world party in order to combat the imperialist-capitalist forces that lead us to a nuclear war and barbarism day by day!