The MENA revolution has started! 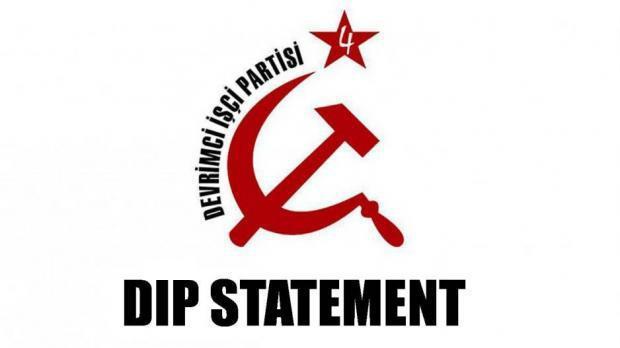 Dear sisters and brothers of Iraq, Lebanon, Algeria and Sudan!

The DIP (Revolutionary Workers Party), which is an internationalist organisation based in Turkey, salutes the heroic efforts of the peoples of your countries in challenging the state structures and the capitalist economic system upon which those state structures rise. After the impressive resilience of the Sudanese people, who lost hundreds of revolutionary martyrs in the process, the resolution of the Algerian people, who did not stop short of defying the regime in all its forms of manifestation, we now have Iraq with its close to 500 martyrs, in a much shorter time span than Sudan’s revolution. This is a tribute to the “democracy” America was supposed to bring to Iraq, which turns out to be clearly worse than the regime of Omar al Bashir! Even Lebanon, where, despite the very real repression, things started out rather peacefully relative to the other countries, is now seemingly entering a period of violent repression on the part of the so-called “security forces”. We are watching with great admiration the resistance and resolution exhibited by your peoples.

We hail from a country that went through a process similar to the one that you are experiencing at this moment. We mean by this the so-called “Gezi Park events” of 2013, a description that hardly covers the multi-faceted and rich dimensions of a very important popular revolt. The Istanbul dimension could perhaps be described by that name. Even there, the name is problematic since there were uprisings totally independent of the Gezi Park incidents. But the description becomes entirely mistaken when one looks beyond Istanbul. There were demonstrations in 80 out of the 81 provinces of Turkey and most of these were very different from the Gezi Park incidents in Istanbul.

Now it is your countries that are experiencing similar but diverse experiences. It is time for us to extend our solidarity to you in an internationalist spirit. Your uprisings have continued despite all the repression. The revolution raged for 8 months in Sudan, with a spectacular two-month sit-in in front of the headquarters of the general staff of the armed forces. In Algeria it has not ceded one inch of ground in 10 months, the Hirak now celebrating its 44th round of Friday marches at the time of writing. Iraq’s revolution, despite earlier regional popular revolts from mid-2018 on, earnestly erupted on the first day of October 2019, so that the revolution proper is almost three months old now. As for Lebanon, 17 December has seen the second month of the revolution, turning over to the third. It is now time for the whole region to draw the conclusions and fight together with you.

We regard all the uprisings that are raging in your countries as revolutions. We are happy to see that by labelling your movements as “Thawra”, you take the same stand.  The mass media of the imperialist countries has now invented a new historical category: “protests”. And an accompanying category of men and women: “protestors”. This is the consequence of the will to deceive the peoples of the world: you struggle to bring down a certain state structure. You want power for the people. You are not protestors, you are revolutionaries!

We see clearly that very different classes and layers of the people are participating in your revolutions. The exceptions are limited to the capitalist magnates, their statesmen, their paid ideologues, and their servants that have been trained to repress the people. Every class and layer naturally has its own grievances regarding the established order of economic relations. From young university graduates who cannot find a decent job to the poorest peasants with, in between, the troubles of the working class or the larger proletariat, whole societies are after not only democracy, but the restructuring of economic life in the most radical manner. In each of your countries there is the outburst of class struggle in its most naked expression.

There are certainly other matters on the agenda, from the oppression of women all the way to the tribulations of minority or oppressed ethnic, national, religious or denominational communities. We agree that all deserve a hearing and all require revolutionary change that eliminates discrimination, segregation or oppression.

But we also believe, dear sisters and brothers, that class struggle is the key to achieving victory for the demands of all the oppressed. It is around the poor, the destitute, the dispossessed, but most importantly the proletariat around which the whole struggle should be reordered. The reason is simple: only these strata, gathered around the working class, can change the system in a radical and durable manner.

We would also like to share with you some lessons that we draw from the people’s rebellion in Turkey in 2013 in the wake of the Gezi events. The major reason why that rebellion was unsuccessful was the absence of organising. If the people’s rebellion had organised itself in committees or councils or shuras as we would call them in this part of the world, it would have been much more difficult for the state to dissolve and absorb the revolt, despite the repression applied. We believe that the examples of organisational structures at the rank and file level of militants and activists, such as the Resistance Committees of the revolution in Sudan, are vital to the success of your revolutions.

However, if it is true that it is in the best interest of the movement to position itself around the working class, this also calls forth the organising of a working class party that remains politically independent of all the social and political forces of the capitalist order and fights for the power of the working class and its various allies, whatever the case may be in your different countries. Political parties are still indispensable instruments for the revolutionary masses in our day and age. We should not turn our backs on all parties simply because we are sick and tired of parties that are guardians of the bourgeois order. Yes, we want them all to go, killon yani killon, all of them means all of them, in the words of our Lebanese sisters and brothers, or as we then said in Turkey “let them all go”! But we want them to go. We do not want our parties, those that stand against this rotten order to be disorganised.

Your revolutions are not only revolutions at the national level. It is really the revolution of the Middle East and North Africa (MENA) that has started. The first generation of uprisings that were part of this wildfire, that generation that erupted between 2011 and 2013, was pioneered by our sisters and brothers in Egypt and Tunisia, but reached almost all corners of our region. Now the concatenation of your revolutions (four revolutions in the space of less than twelve months) imply that something is brewing once again all over the region. Do not forget that our sisters and brothers in Iran have also risen up time and again within the last two years, the last uprising having taken a very spectacular form. We will be able to solve our problems only at the regional level. We cannot go into details, but let it just be said that otherwise all the macro problems that exist and that pit religion or confession or ethnic group against one another will be, secretly or openly, provoked by other forces in the region or by the imperialists. This regional salvation will, therefore, also necessarily have to be anti-imperialist and, therefore anti-Zionist, in nature. This dictates to us a higher level of organising internationally.

Let us then join hands to fight the retrograde regimes of the MENA region and to save our economies and lives from the rule of capitalism which has already historically outlived its potential. Let us organise together in solidarity and bring down our enemies, the ruling classes and their imperialist backers to come together in a federation of the Middle East and North Africa. We at DIP believe that this federation can only be established on the basis of socialism, but we are ready to fight together with all revolutionary movements against the established order of the MENA region.

We offer, dear revolutionary comrades, to extend to you, to the best of our abilities, all the assistance we can in your noble endeavour to bring down despotism and capitalism in your countries.

Long live the revolutions of Sudan, Algeria, Iraq, and Lebanon!

Forward for the triumph of the ongoing revolutions and the extension of revolution to the entire MENA region!