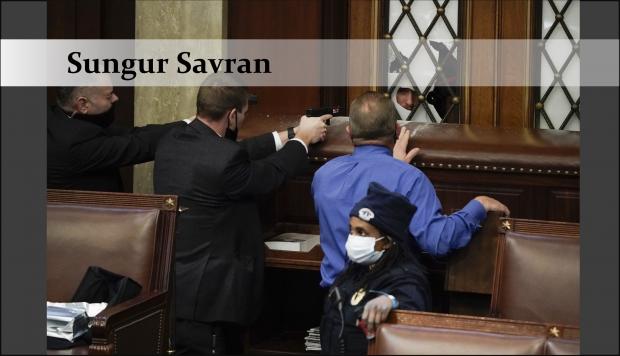 The following is the introductory section of the detailed analysis that Sungur Savran presents concerning the meaning of the storming of the Capitol by the hordes of the MAGA (Make America Great Again) followers of Donald Trump in an article of the same title in the journal Revolutionary Marxism 2021 (http://www.devrimcimarksizm.net/sites/default/files/the-meaning-of-the-storming-of-the-capitol-sungur-savran.pdf), the annual English-language edition of Devrimci Marksizm, a Turkish-language journal of theory and politics. After having criticised thoroughly the “populism” school of bourgeois political science and those on the Marxist left who for years denied the rise of fascism in the imperialist countries (and more and more in the semi-industrialised middle-income countries such as Brazil and India), Savran goes on to deepen his analysis with respect to the material basis of the rise of fascism in the 21st century and the division within the international bourgeoisie between the globalists and the nationalist cum racists of the ilk of not only Trump, but also Le Pen, Salvini, Meloni, and, now Zemmour. Savran also brings in France and Italy in order to provide a more comparative picture. Having pointed to the heavy responsibility of left-wing parties of all stripes in the swift rise of fascism, Savran ends by proposing a strategic orientation for revolutionary working-class politics.

The series of events of 6th January 2021 in the United States that culminated in the storming of Congress is, to refer to a metaphor Lenin used in an entirely different context, “a flash of lightning which threw more of a glare on reality than anything else.”*

The whole world, including the overwhelming majority of the international left-wing movement, reformist, left-liberal, postmodern, Stalinist, centrist, or even revolutionary, was astonished to see unruly masses attack the Capitol building, that citadel of “American democracy”, and fight the police that tried, somewhat half-heartedly, to defend the members of the US Congress from the fury of the fringe elements of that crowd. To most people, this was like a bolt of lightning from a blue sky.

This is the kind of development that we had warned against in June 2019, in two articles written to assess the results of the elections to the European Parliament and in particular those of the so-called “populist” movement in the different countries of the European Union. In a concluding section titled carefully “In the wink of an eye”, this is what we had to say on the future of this movement that we refused to call “populist” in favour of the appellation “proto-fascist”:

Disciplined, fed with the lowliest ideological garbage, entranced by the feeling of superiority that derives from the erstwhile colonial feats of European civilisation and of their own country, full of rage against the immigrant and the refugee, who, they believe, has robbed them of their job, housing, educational and healthcare services, a crowd full of missionary zeal. The only missing thing is their militia, their paramilitary forces, their bands of thugs. But this is precisely why we do not label them as fascists, but proto-fascists. That they can overcome this lacuna in the wink of an eye has been demonstrated in Charlottesville, Virginia in the events of summer 2017 or in the German cities of Chemnitz and Köthen last autumn or in the chain of events in which black immigrant farm workers were attacked (and occasionally killed) in Italy after Salvini came to power in a coalition government last year.

6th January was precisely that kind of incident raised to a power, an earthquake that came “in the wink of an eye” for the unwary and the unprepared. The 6th January storming of the Capitol “threw more of a glare on reality than anything else” with respect to the emerging fascism of our time.

However grotesque might have been the action in many of its aspects, whatever weaknesses haunted the initiative taken when compared to its ultimate goal, the obstruction of Biden’s presidency and the return of Trump to the White House, this was an attempt by paramilitary forces to take political power into their hands and bring in their revered leader by violent means.

Many on the right and left hurry to call this “fascist” because what happened amounted in their eyes to a coup d’Etat. But not all coups are fascist, far from it. No, it was because the Trump movement already had the characteristics of fascism in the process of becoming that the assault of the mob is a lightning that threw a glare on the world situation, beyond the American context. This instantaneous conversion of the deniers of Trump’s fascism is thus an indication of their earlier confusion.

The debate is now over. It can and must be said with certitude that the family of movements that harp on the nationalism and nativism of the masses and try to impose a new and entirely different orientation to the politics of their country in at least the United States and a multitude of European countries can best be understood as an original form of emerging fascism. That scourge of the interwar years of the 20th century has come back to haunt the world once again, albeit following a different trajectory in its struggle for power.

This is a painful defeat for the “populism” school, as well as the soft left in America who, starting with the Democratic Socialists of America, did not even suspect that we are passing through extraordinary times and bet all their stakes on the vote for the candidate of the Democratic Party. It is also a stinging warning to those in the so-called Trotskyist camp, whether post-Leninist, centrist or revolutionary Marxist, who stubbornly denied the rise of fascism up until that fateful day when the development of practical life refuted their preconceptions.

This article is made up of two parts. In the first part, we will draw a balance-sheet of the previous debate on Trump and his European counterparts, the Le Pens and the Salvinis. In order to do this, we will start by pointing out the specifically fascist aspects of the storming of the Capitol. We will then engage in a polemic with the dominant bourgeois school of thought on this question, the school that bases its analysis of these movements on the concept of “populism”. This will be followed by a critique of those Trotskyists that denied the fascist orientation of the movements in question, including Trump himself.

In part two, we will move on to a materialist analysis of the conditions that led to the emergence and strengthening of these movements, which we will henceforth call “proto-fascist”, a choice that will become clear in the course of the article. We have earlier explained why these movements have a fascist substance but not yet a fully fascist form, i.e. why they should be considered to be at an incomplete stage of their becoming.**What we will do in the second part of the article is to deepen that previous analysis as to why the substance of these movements is fascism by bringing in a discussion of globalisation and deglobalisation.

We will conclude by taking up as concisely as possible the question of the strategic orientation indispensable for Marxists, that is, if the proletariat and its potential allies are to defeat the rising threat of fascism in the 21st century.