May Day in Istanbul a battle ground 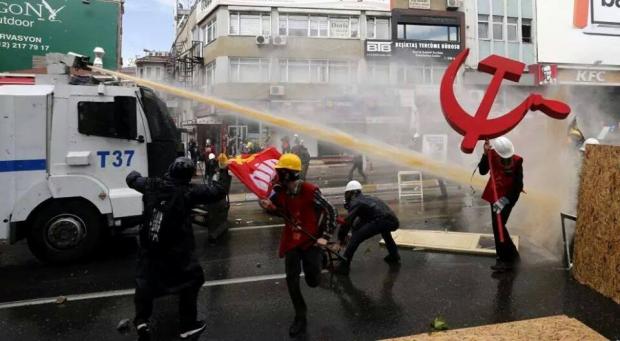 After the people’s revolt last summer, after the immense crisis of the state caused by the breakup of the Islamic power bloc in December 2013, after the local elections that gave a new lease of life to prime minister Erdogan and his AKP government, May Day in Istanbul became a battle ground between the government forces, on the one hand, and the vanguard of the working class and the forces of the left, on the other.

At the heart of the conflict was the dispute over Taksim square. Traditionally the centre of the city in every sense of the word, just like Times Square in New York, the Zocaló in Mexico City, the Plaza de Mayo in Buenos Aires, Syndagma square in Athens or Tahrir in Cairo, Taksim has also been for almost half a century now, i.e. ever since the workers’ and socialist movement has become a mass phenomenon, the Mecca of working class and socialist demonstrations. This has especially been true since 1977, when, during a huge rally of the workers’ movement on May Day, secret service provocations and sniper activity left at least 33 dead. Ever since then, Taksim square has become a bone of contention between the advanced sections of the working class movement and the socialist movement, on the one hand, and the repressive forces of the bourgeois state, on the other.

The military dictatorship of the 1980s was successful in closing the square to left-wing demonstrations (while all other kinds of demonstrations, ranging from sports celebrations to Islamist and fascist rallies were tolerated, if unofficially). The supposedly democratic governments of the 1990s and the early 2000s took this practice over as a “gain”, so to speak, of the ruling classes and continued to apply the same ban. Starting from 2007, the 30th anniversary of the 1997 May Day massacre, the advanced sections of the working class turned their gaze once again to Taksim. On May Day 2008 and 2009 there were pitched battles in the whole area around Taksim, as we were trying to enter the square while the police were adamant in banning the square. 2010 brought a small victory to the workers’ and socialist movement, when both due to stepped up pressure and its search for additional support for the constitutional referendum that was going to take place that autumn, the government declared May Day a national holiday and opened Taksim square for celebrations. Three years of jubilant celebrations followed. These were occasions during which hundreds of thousands came together, including the more backward elements of the trade union movement, in a festive mood but in an atmosphere of reconciliation to the government and to capitalism.

Then came 2013, again a turning point. This occasion was in effect the prelude to the Gezi Park events and the people’s revolt. Citing the fact that Taksim square was a construction ground due to the overhaul as a result of the plans geared to turning the park, adjacent to the square itself, into a shopping mall, the government banned Taksim for demonstrations once again. We battled but lost. The DIP was there, with its main banner reading “Taksim will become Tahrir” (the centre of the Egyptian revolution) and its main slogan saying in addition to this “the working class will win”. Taksim of course did become a quasi-Tahrir, as everyone knows, only a month later, on the night of 31 May 2013, when, under the unstoppable pressure of a mass people’s rebellion, the government had to withdraw the police and leave the whole square and Gezi Park to the movement. We all settled there, established a tent city, formed the Gezi Commune, so to speak, and kept the police out for a fortnight. That was the heyday of the people’s rebellion, popularly known internationally as the Gezi movement.

The ghosts of Gezi visit Erdogan

This year there was no construction on the square. But the phantom of the people’s rebellion is still hovering over Turkey! Erdogan was thrice defeated by the Gezi rebellion. Locally, i.e. at the level of Istanbul because he had to waiver his plans to totally restructure Taksim square by building a shopping mall in place of the Gezi Park and a mosque nearby (which would have been a great symbolic move in representing the liberal Islamism of the AKP). Nationally because he had to drop his plans to overhaul the constitution, turning the traditional parliamentary system of Turkey into a presidential or semi-presidential one and then climb to the presidency himself. (He may still become the president of the republic, not the president in the US sense, but with much more limited powers than he was dreaming of.) Internationally because one of the major moving forces of the people’s rebellion being the Alevi minority, whose brethren are under threat of massacres in Syria from the Sunni fundamentalists supported by Erdogan, the AKP government had to forego any plans it may have had for kindling war with Syria.

The people’s rebellion was also the ground out of which grew the tumultuous rift in the Islamist power bloc moulded in the early 2000s, out of which came the AKP government with its reign now running into its 12th year. The imam Fethullah Gulen and his community scandalously abandoned Erdogan, using the clout in the police and the judiciary they had been granted by the self-same Erdogan to expose the utter corruption into which the AKP government had sunk during its years in power.

So Erdogan fears a re-edition of the Gezi people’s rebellion as the plague. This is why he declared on the eve of May Day this year that Taksim was banned forever. All demonstrations were to be held in a strip of land that has been added to the cityscape as a result of the filling in of the sea. This is a place in the middle of nowhere, where the masses can only touch the hearts of the legendary seagulls of Istanbul and chant towards the beautiful Princess Islands!

Naturally, the workers’ and socialist movements did not relent. The result was a prolonged battle around Taksim square that lasted for hours and hours and extended not only into rather distant working class neighbourhoods, but also into the posh bourgeois areas north of the city.

Beşiktaş, a progressive neighbourhood with a high level of student accommodation and a local football team whose fan club was perhaps the most effective force in the Gezi events, became the focus of the pitched battle waged by left forces against the forces of repression. And here one can say, without the least risk of exaggeration, that the DIP, Turkish section of the CRFI, was at the forefront, naturally together with some other socialist forces, of the whole struggle to push the police back, to bring down its barricades and to force the way to Taksim open. At the moment when the vanguard, pressing from the side streets into the major avenue that leads from Beşiktaş into Taksim, forced the police back and created space for large masses of people to form a column on that avenue, the special symbol of the DIP, a gigantic hammer and sickle made out of a foam-like material, was at the head of the column and, together with a lot of DIP militants holding each a DIP banner in their hands, fought the police tanks relentlessly. The picture that shows the hammer-and-sickle fight the police tank should be considered a new addition to Turkish left-wing folklore. The “woman in red” of Gezi Park, who courageously resisted the gas sprayed onto her by the police, is now coupled with the hammer-and-sickle that the DIP militant holds high in the face of the pressurised water that is thrown directly at him.

The CRFI (DEYK in its Turkish acronym) was present in the sprayed slogans that DIP militants wrote on walls, garage doors, bill boards and other places throughout the event.

We have one comrade hit with a plastic bullet on his forehead, fortunately with no fatal risk, several who were hit in different parts of their bodies with gas capsules (the lethal weapon that has killed, among others, Berkin Elvan, the 15-year old martyr of Gezi), one woman comrade who fell in the stampede and had to be hospitalised, and many whose skin was burnt by the chemical contained in the water jet that police tanks throw on the demonstrators.

But all are happy, knowing that we have done our duty and will certainly gather the fruits of this struggle in due time. Let no one forget the following fact: on May Day 2013 it was the police who kept us outside of Taksim square. A tactical victory for them and a tactical defeat for us. On the 1st of June 2013, a month later to the day, it was us who had kicked out the police form that very square. A tactical victory for us and a tactical defeat for them, one would symmetrically, but deceptively be inclined to say. No, a strategically important defeat for the police, the AKP and Erdogan. For some time to come, nothing will ever be the same in the class struggle in Turkey. This was demonstrated, if need be, once again today. Whereas last year the resistance put up by the movement was much weaker and meeker, this year the whole movement fought much more courageously and much more numerously.

It is the working class and its vanguard that will overcome eventually!