May Day has come home to the United States: car caravan on May Day in Oakland, California 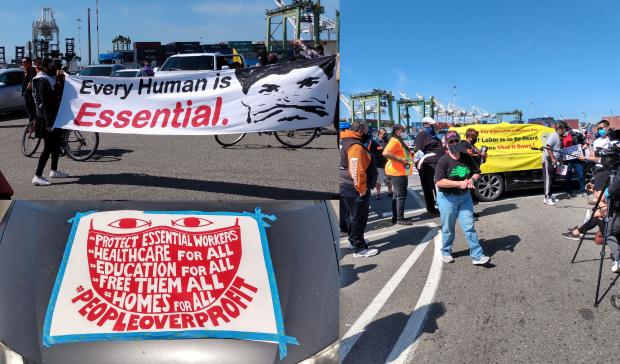 They are few, we are many: and yet, O our Mother,
Many years were we wordless and nought was our deed,
But now the word flitteth from brother to brother:
We have furrowed the acres and scattered the seed.

Win on then unyielding, through fair and foul weather,
And pass not a day that your deed shall avail.
And in hope every spring-tide come gather together
That unto the Earth ye may tell all your tale.

It was May Day!

This May Day finds the proletariat fighting two wars: against the Covid-19 pandemic and against capitalism. The two fights are inseparably bound, for it is capitalism that set the conditions for the virus outbreak to turn rapidly into a global pandemic. It is the four decade-long capitalist assault on the healthcare system that deprived humanity of medical supplies when they are most needed. It is capitalist world trade that led capitalist states and politicians all around the world to deny, underestimate, or cover up the pandemic to keep “the economy running” rather than protecting people’s lives. And last, but definitely not least, it is the imminent unfolding of the Third Great Depression that haunts the hearts and minds of capitalists that turn them into panicked dictators forcing the workers to non-sanitized workplaces with little or no hygienic provisions.

Yet, at the very heart of imperialism, workers are crying out loud that they shall neither die for nor sacrifice their fellow class members to the profit-hunger of the bosses. The San Francisco Bay Area in California, silent on May Days for decades, witnessed an outburst of workers’ creative energy in the shape of a May Day car caravan.

As it is well-known, May Day, the International Workers’ Day, was born out of a tragic episode in the history of class struggle in the USA. As they were rallying for an 8-hour working day on Haymarket Square, the workers of Chicago were bombed by an unknown provocateur on May 4th, 1886. In a bitter irony, the American government went on to frame the leaders of the workers themselves for this massacre and executed seven of them. To commemorate the Haymarket martyrs and keep on the class struggle, the Second International sanctioned May 1st as International Workers’ Day, or May Day.

Despite being born on US soil, however, May Day had been almost entirely forgotten in this country. Having sanctioned another day, September 7th, as “Labor Day”, the US government had stripped all political and historical significance from May 1st. Accordingly, the May Day celebrations across the nation have been rather modest for decades (the major exception was  May 1st, 2017, i.e. the first May Day after Trump’s election).

Since 2006, though, May Day has been on a slow but steady comeback. That year, immigrant workers, who comprise a very significant section of the Californian working class, took their grievances to the streets. This event paved the road for the entire working class to reclaim May Day, and still inspires many. The immigrant workers’ struggles have been going on since then in the form of one-day mass work stoppages, under the name “A Day Without Immigrants”.

More recently, for the last five years, the workers of the Oakland Port have been shutting down the entire port on every May Day. Organized in the ILWU (International Longshore Workers’ Union), historically one of the most militant unions across the nation, the longshore workers of Oakland have been on the forefront on every social fight in the region. Born out of the socialist-led San Francisco general strike of 1934, it spearheaded the fight for better wages and job security in the midst of the Great Depression, as well as racial integration in trade unions. Since that time, it has lent its support to every major workers’ struggle around the issues of wages, housing, and racial discrimination. Yet lately, they have been facing the threat of privatization of the port and the turning of some piers into an area for a baseball stadium. This would severely undermine the ILWU’s long-fought for power in the region, and make many workers lose their jobs. The Covid-19 pandemic has worsened their situation: during March and April of this year, they have been forced to work in the contaminated areas with meager compensation, and they had to fight it off.

This May Day, the ILWU called for a “socially distant rally” at the Oakland Port. This coincided with the spontaneous class actions of workers across the country to protect themselves from the virus and from the bosses’ greed. Workers in large chain stores and distribution companies such as Amazon, Whole Foods, and Target have been organizing walkouts, protests, and wildcat strikes for the last month. All of this effort had culminated into a call for a coordinated strike on May Day by all workers of these companies, with demands including paid sick leave, no layoffs during the pandemic, and proper sanitation of essential workplaces. Across California, where rent has skyrocketed in the last few decades, tenants have been pushing for a “rent strike” in large numbers due to the impact of Covid-19 on their incomes.

Lastly, Cooperation Jackson, a nation-wide network of organizers, activists, and trade-unionists, called for a general strike on May Day, with the slogans “We won’t die for Wall Street” and “We will decide when to go to work”. To this end, and as far as the Bay Area was concerned, they came up with the idea of a May Day car caravan with the Port as its beginning point. This call found tremendous response across the Bay. Since the Bay Area is the hub for many different sections of the working class from port workers to Uber drivers, each with their specific grievance in the face of economic and pandemic crises, May Day caravan provided a common rallying platform of a majority of the working class with all its diversity. Many socialist and workers’ organizations were also present with their car contingents, banners, and slogans. Those who couldn’t show up sent their endorsement and solidarity letters.

Rally and caravan: festival of the working class despite the shadow of the virus

The rally started on May Day morning, with speeches from ILWU leaders and rank-and-file workers on the dangers of the Covid-19 pandemic in the context of capitalist assault. The embodiment of this combination of natural disaster and bourgeois greed was right in front of the speakers and the audience: the Grand Princess, a virus-infected cruise ship that any country of the world is yet to accept, with its crew left entirely to its destiny. One crew member has already died on board. In an internationalist stretch of hand, the ILWU spokespeople have demanded the immediate release and appropriate treatment of the Princess’s crew in the past few weeks. Now, they spoke of it as an example of the lavish luxury the ruling class enjoys while they let the workers literally to die. Further, they told the audience that the majority of the crew had been recruited from the Philippines, and that the countries’ militarized response has laid a heavy burden on the Filipino working class.

The speakers also emphasized the vital necessity of working class solidarity across sectors and nations. The leader of the local section of the union (Local 10) ended his speech with a call for a workers’ party independent from both bourgeois parties.

Speakers from other sections of the working class, including drivers who are facing major job loss due to automation, and the UC Santa Cruz teaching assistants who have led a heroic wildcat strike for the past five months, were also provided a platform.

Later, everyone got on their cars or bikes to join the caravan, each with their banner or flag. Some slogans written on banners read: “No pay, no rent”; “Capitalism is the disease, communism is the cure”, “Every human is essential”, “People over profit”, and “If labor is to be heard, then shut it [referring to both the port and the economy] down”. At its peak, the car line-up got so long that it had to bend over into the opposite lane, forming a U-shape, with each side of the U honking and saluting the other. One of the largest car contingents was that of TANC (Tenant and Neighborhood Councils), expressive of the great grievance around the rent burden.

The caravan stopped by some sights that are very significant for the current class struggle in the region. Among these was the Oakland Prison, notorious for hosting predominantly black people with virtually no or trivial reasons and under miserable conditions. Another important site was the local Whole Foods supermarket that broke into a wildcat strike on the same day. Everywhere the drivers stopped, they honked and saluted their fellow working-class siblings inside, who reciprocated with applauses when possible.

It is reported that the caravan was the biggest May Day action in the country this year.

Thus, the May Day in the Bay action not only brought different elements of the working class together, but it also addressed some of the most major concerns facing it: protection from Covid-19, layoffs due to the twin evils of pandemic and economic collapse, job loss, living wages, and the necessity of independent political representation. Moreover, it demonstrated the international character of their struggle by raising the demands for the international crew of the cruise ship quarantined near the port.

Therefore, this May Day might have marked the beginning of a new and decisive phase of class struggles in the USA. If the combined effort of workers, unionists, and socialists that went into May Day in the Bay’s making could be sustained over a longer period, it might enable an adequate response to the pandemic and capital’s onslaught by the US working class.