Let’s stand for the right of national self-determination! For an Iberian Socialist Federation! 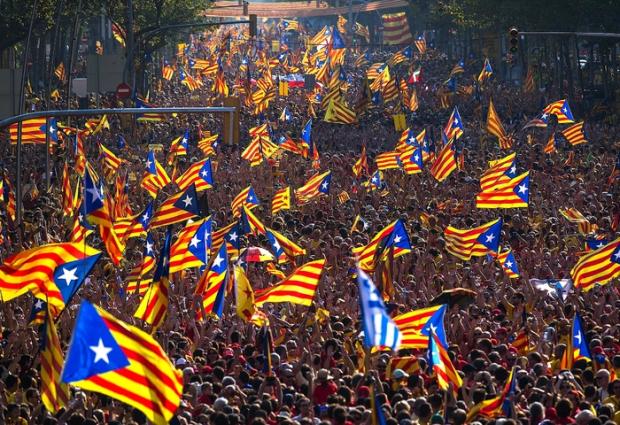 Before the military-political intervention against Catalonia

The call to exercise the national self-determination in Catalonia, by means of a referendum, next October 1st, has been responded with a repressive offensive  by the Spanish government, which includes the annulation of the political sovereignty of the Generalitat, the intervention of the Catalan Police and sending the army.

We defend the Catalan right of self-determination. We call the workers of the world and in first place from all Spanish State, for an international action against this abuse. It’s necessary to defeat the provocation of the Spanish monarchy, defend the realization of the referendum and claim for the installation of a Republic in all Spanish land.

We stand for the right of self-determination of Catalonia, included the right to separation or independence, from a perspective independent from nationalism and Catalan bourgeoisie. The Generalitat which promotes the referendum represents a bosses’ and adjusting regime, which has promoted unemployment, labor precarization, salaries cuts, health and education privatization and social spending cuts. The aim of bourgeois’ independentism is to reinforce the capacity of State to develop a greater attack to the working class and the bonds with imperialist European Union’s bourgeoisie. In opposition to capitalist content separatism we stand for a Workers’ and Socialist Republic in the form of a Federation, and the Socialist European Union.

The “Law of legal transitoriness and founding of the republic” that will rule for a year until the entry into force of a Constitution, establishes the subordination of “internal law” to “European Union law”, as the automatic integration of new normatives approved in Brussels. Prefigures a new State order tailored to local exploiters and the international bourgeoisie. The same goes to attaching the Nato. It establishes, as well, the recognition of the Cataluña’s external debt and the one with the Spanish State. The terms of the convocatory limit in a decisive way the right of the people of Catalonia to real exercise of national determination. We defend the right to self-determination with a program to put an end to Spanish monarchy -imposed by Franquism; for the Republic, and for the unity of proletariat of all Spanish State in struggle against the capital, the anti-working class adjustments and the Capitalist State on the whole.

The Catalan national question emerges with powerful strength as consequence of the effects of the international capitalist bankruptcy and the huge adjustment it has imposed to the whole of the Spanish State in prejudice of the working masses and to the solvency of the States Autonomies. It’s part of a Spanish State crisis on the whole and of a generalized “indignation” of the workers. It stands for a class struggle of the working class of the whole State. In opposition to segmentation or balkanization of the different nationalities of the working class, we stand for the class unity in the whole Spanish territory to struggle for a Federative Socialist Republic.

The repressive impediment to October 1st referendum won’t put an end to the open crisis but it will deepen it even more. The promise of a greater autonomy for Catalonia, in the frame of a further negotiation in the “legality”, as Rajoy’s government pleads along with all the acolyte press, it’s simply a deceit. The institutional and military intervention from Spanish State against Generalitat has widened the pit with the people of Catalonia and a political crisis that grows in the whole Spain. The consciousness of this situation must lead to the unity of the workers and the struggle to put down monarchy and the proclamation of a real democratic Republic.

The left parties, Psoe as well as Podemos, had left in clear their hostility to national self-determination and their support to Spanish State. The Psoe has made a front with Rajoy and the monarchy against national rights of Cataluña. Podemos vindicates “the right to decide”, but excludes the right of separation, that is to stand for a conditioned “right”. That’s the conclusion of a political strategy which defends the Spanish integration to the EU and the belonging to the Nato.

The national question can’t be dissociated from the social interests in struggle, and the class struggle. It’s necessary to put into manifest the interests’ contraposition that exist among the classes and develop a differentiation within Catalonia and the rest of Spain that gather together the proletariat of the whole Iberian Peninsula in an open confrontation against bourgeoisie. Catalan and Spanish are two alternative capitalist responses to a systemic international capitalist crisis. To capitalist solutions we oppose the struggle for a Socialist Iberian Federation and for the Socialist United States of Europe.

The political-institutional intervention from the Spanish State in Catalonia sets the need of defending the right of self-determination by means of direct action. There must be police, troops and legal interventors expulsion from Catalonia to assure the possibility of the referendum. It’s needed a general strike to expel the monarchy interventors and call for solidarity strikes all along Spain. The political-military intervention in Cataluña threatens the democratic liberties in the whole Spanish State –turns it into an exception State in all its territory.

Let’s defend the right of self-determination by means of a class struggle in all State and a great solidarity of workers from all around the world!

Yes to the right of self-determination!

Down with monarchy, for the installation of a democratic Republic!

For a Socialist Iberian Federation. For the Socialist Unity of Europe –From the Atlantic to the pacific ocean!